The Voice of the Nation is silenced

His former commander in the Palmach Shaike Gavish, 92, said that Gurevich had remained true to the flag till the end of his days. 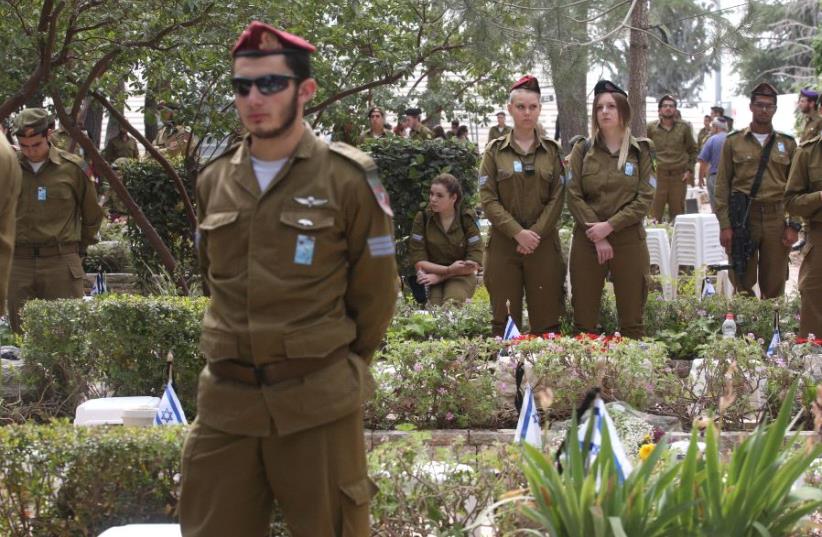 IDF soldiers at the national military cemetery on Mount Herzl in Jerusalem on Memorial Day, May 1, 2017‏
(photo credit: MARC ISRAEL SELLEM)
Advertisement
Amikam Gurevich, a veteran Israel Radio broadcaster and long-time master of ceremonies at national events including Israel Independence Day, Holocaust Remembrance Day and the early years of the annual Independence Day Bible Quiz, died Thursday at the age of 89.He was laid to rest on Friday at the Nachlaqt Yitzhak cemetery in Tel Aviv where he was eulogized by his daughter Nirit who said how proud she had been to be his daughter; and by his former Palmah commander Shaike Gavish, 92, who said that Gurevich had remained true to the flag till the end of his days.The Palmah hymn, which underscores the readiness of the pre-state elite strike force’s soldiers to obey commands under all conditions, was sung at the graveside.As a youth, Gurevich joined the Gadna – the Hagana’s junior arm. He quickly made his way up the ranks into the senior division, as was common among people of his generation who were fighting both the Arabs and the British. During the War of Independence he fought in the Upper Galilee with the Palmah’s Yiftach Brigade.He was subsequently recruited into Mossad as an Aliya Bet officer, and brought eight boatloads of Holocaust survivors to Israel. This may have imbued him with the special empathy that was discernible in his voice at Holocaust remembrance events.Gurevich was best known for the verse of the day Bible readings that he broadcast on Israel Radio. People were always amazed at his pronunciation of Hebrew gutturals. His impeccable enunciation was most unusual for an Ashkenazi Jew, even though he had been born in Tel Aviv. It was on a par with that of legendary broadcaster Moshe Hovav who due to his Yemenite background had perfect pronunciation of the gutturals.When asked about his own perfect enunciation, Gurevich said that it was due to his teachers. His generation had been fortunate in having the best and most dedicated language teachers, he said.Gurevich also had a finely tuned sense of drama. When he read, regardless of whether it was from the Bible or something mundane, he sounded as if his voice had penetrated from heaven to earth in the most authoritative fashion.In the 1940s and 1950s, Gurevich was a regular at Tel Aviv’s legendary Café Cassit – then the favorite meeting place of Israel’s thespians, literati and members of the fourth estate, along with army officers during the War of Independence. Fifteen years ago, when a For Rent sign appeared on the Dizengoff Street institution, Gurevich led the campaign – which ultimately failed – to restore the premises to its former glory.A successor generation took over as the older generation of Tel Aviv’s Bohemian crowd died out, but people such as Gurevich and Uri Avneri, who were carry-overs from a previous era, continued to congregate there until the late 1980s when Cassit began to fizzle.For more than four decades, Kassit was where creative ideas for plays, songs, poems, musical compositions and novels were exchanged. Considering the site’s importance in the history of Tel Aviv, Gurevich lobbied unsuccessfully to have it turned into a municipal monument. Indeed, considering the identities of its most frequent patrons, the signatures they left on sketches in lieu of payment for meals, and the verses they wrote on table napkins, not to mention the many photographs they had taken there, Cassit could have easily served as a small arts museum – and Gurevich’s name would have been there in perpetuity with many of the other great figures of the city that never sleeps.