While the Jordanians and Israelis got along, the two Israelis on panel sparred. 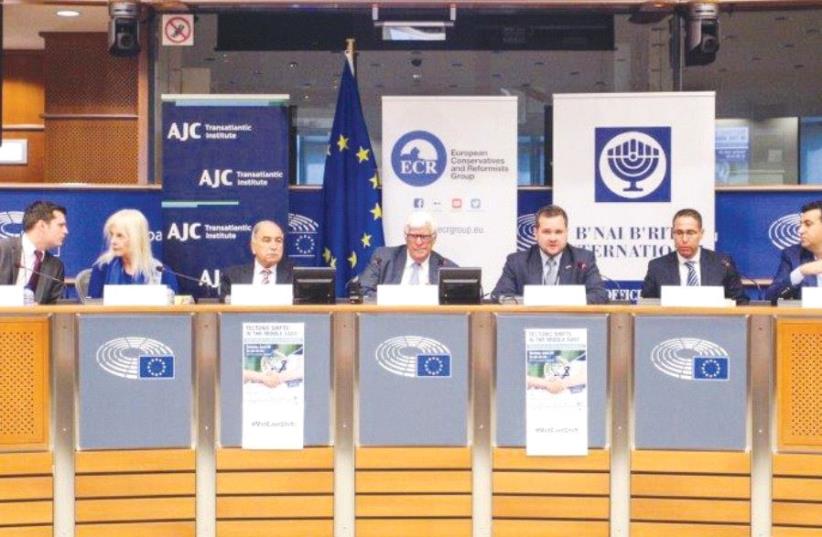 LIKUD DEPUTY DIRECTOR-GENERAL Eli Hazan (second right) takes part in a panel discussion at the European Parliament in Brussels
(photo credit: Courtesy)
Advertisement
Likud deputy director-general Eli Hazan made history on Tuesday when he spoke on a panel with Jordanian representatives at the European Parliament in Brussels.In past events of the European Parliament when right-wing Israeli representatives spoke, Arabs from countries with which Israel had peace agreements refused to sit on the same panel, while Arabs from countries with which Israel does not have relations have left the room.But at Tuesday’s event on “Techtonic changes in the Middle East: Trump, Iran and the Israeli-Sunni Rapprochement,” Arabs from Gulf states, Morocco, the Palestinian Authority and Islamic organizations active in Europe remained in their seats when Hazan spoke.The event was organized and hosted by ECR parliament members Anders Vistisen and Bas Belder.They said the reason the event was historic was that for the first time Israeli and Arab civil society came together in the European Paliament to talk about cooperation in the context of the Arab-Israeli conflict. They said the event was special because there were positive Arab voices about cooperating with Israel for the benefit of the region and its people.The Jordanians on the panel were Amman Center for Peace and Development chairman Mansour Abu Rashid and Dr. Abdullah Swalha, the founder of the Center for Israel Studies in Jordan. Israeli journalist Smadar Perry was also on the panel.The event happened under the auspices of the EU Parliament’s European Conservatives and Reformists faction, of which the Likud became a regional member last year, due to Hazan’s efforts.In his speech, Hazan emphasized economic developments in the Middle East that were initiated by Prime Minister Benjamin Netanyahu’s government. He singled out a natural gas deal signed with Jordan, Transportation Minister Israel Katz’s plans for an artificial island off the coast of the Gaza Strip that would help the Palestinians, and a “regional peace train” that would go through Jordan on the way to the Persian Gulf.Swalha spoke about how US President Donald Trump’s administration provided a new opportunity for interaction and advancing peace. Abu Rashid recalled fighting against Israel in the Six Day War and spoke about security cooperation among Israel, Jordan and the Palestinian Authority.While the Jordanians and the Israelis on the panel got along, Hazan sparred with Perry when she said PA President Mahmoud Abbas does not support terrorism. Hazan responded the PA gives stipends to terrorists and names streets and schools after them.