‘Russia is one of the most important markets in which the Tourism Ministry operates,’ says Levin 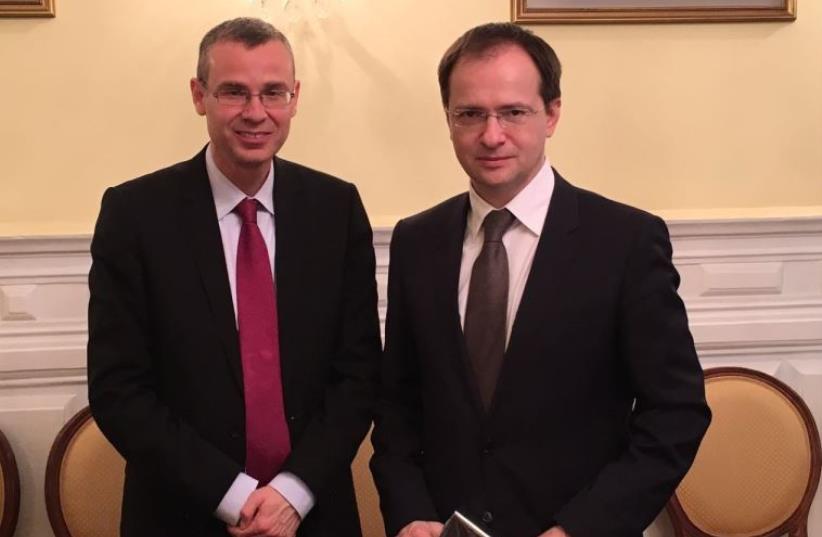 Minister of Tourism Yariv Levin (left) meets with Russia’s Minister of Culture Vladimir Medinsky in Moscow on Wednesday.
(photo credit: MINISTRY OF TOURISM)
Advertisement
In an effort to remove obstacles blocking the lucrative Russian tourist market from visiting Israel, Tourism Minister Yariv Levin met with the nation’s leading tourism figures in Moscow on Wednesday at MITT, Russia’s largest tourism fair.The four-day annual event draws more than 83,000 participants and thousands of exhibitors from more than 200 countries. Levin, who manned Israel’s exhibition stand, also led a roundtable discussion entitled “New Perspectives on Developing Tourism from Russia to Israel.”“Russia is one of the most important markets in which the Tourism Ministry operates,” said Levin. “I chose to participate in MITT in order to continue and strengthen our marketing activities there, and to exploit the opportunity to increase incoming tourism from Russia.”“We believe that tourism from Russia will once again flourish, and we will enjoy the fruits of our loyalty to the Russian tourism industry,” he added.Levin met with Russia’s Minister of Culture Vladimir Medinsky, his deputy Ella Manilova, Deputy Transportation Minister Valery Okulov, the CEO of Aeroflot Vitaly Savelyev, Deputy Mayor of Moscow Leonid Pechatnikov, and Israeli Ambassador to Russia Zvi Hefetz.According to the Tourism Ministry, the Israeli booth occupied 480-square-meters of exhibition area, and included 30 representatives from the country’s tourism industry, including hoteliers, travel agents, airline companies, tourist associations, and local authorities.During the course of the fair, representatives from the ministry met with entrepreneurs and hoteliers to discuss increased marketing investment in tourism in Israel, as well as with leading tourism wholesalers and airline representatives to increase incoming tourism.“Given the special geopolitical situation that created a new opportunity to increase the numbers of incoming tourists from Russia, Levin instructed the ministry to provide solutions to Russian tour operators and airlines who are currently moving away from Turkey and Egypt, and to transform Israel into a worthwhile and attractive travel destination for the Russian public,” the ministry said in a statement.“Among others, the marketing team at the ministry is working to adapt the Israel tourism product to the Russian tourism sector which, until now, has chosen to vacation in neighboring countries in the region.”The largest obstacle preventing more Russian tourism in Israel is due to the country’s economic crisis, the ministry said.Moreover, noting that vacation costs in Israel are higher than the competition in neighboring countries, the ministry said it is creating packages that are suitable for the Russian tourist’s budget.“Within this framework, the ministry set a challenge about three months ago to tour operators to create vacation packages in Israel priced at $350 for a three-to-four-night stay on a B&B basis,” the ministry said.“About 10 tour operators met the challenge and their referral details were included in the advertising campaign.The Tourism Ministry is also working with the hotels in Eilat to meet the needs of the Russian tourist, including, among others, offering all-inclusive hospitality packages.”Unlike previous years, when Israel’s advertising campaign was launched in the spring, the ministry launched its new campaign in the winter to increase interest in Eilat in an effort to leverage its incentive of €45 per tourist landing in Eilat, which was given to airline companies.Russia represents the second largest source country for incoming tourism in Israel, after the USA, the ministry said. In the first two months of this year, 31,236 visitors from Russia arrived in Israel.In 2015 the Tourism Ministry invested NIS 27 million in advertising campaigns in Russia, as well as NIS 8m.in an online, radio and TV campaign that included giant centrally located billboards 90 x 10 meters in size positioned in heavily trafficked areas.“The ministry is working to adapt the tourism product to the Russian tourist,” the ministry said. “Three months ago, more than 10 tourism wholesalers met the challenge set by the ministry to create $350 packages to Israel, in return for marketing support.”There are currently 65 weekly flights from Russia into Ben-Gurion Airport, and another three weekly flights into Eilat, the ministry said.