‘Trade with Israel good for business and spiritual nourishment’

“We Christians in Kenya have a lot of attachment to Israel, and that helps in wanting to do business with the country,” 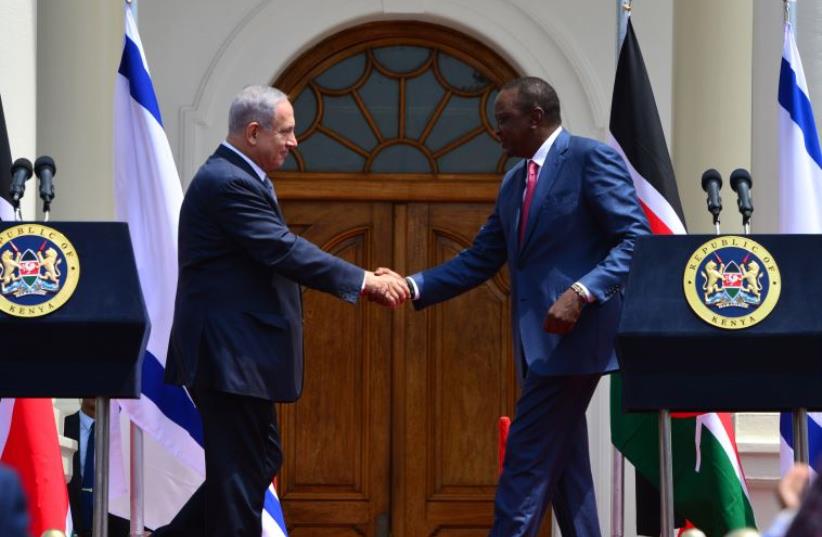 PM Netanyahu and Kenya’s President Uhuru Kenyatta
(photo credit: KOBI GIDEON/GPO)
Advertisement
NAIROBI – When Prime Minister Benjamin Netanyahu and Kenyan President Uhuru Kenyatta talk about wanting to strengthen Israeli-Kenyan business connections, they are not talking only about big companies like Israel Aircrafts Industries, but also about small business people such as Eva Muthuuri.Muthuuri, who lives in Nairobi, was one of hundreds of Kenyan business people who met Tuesday in Netanyahu’s hotel – the Villa Rosa Kempinski – with Israeli businessmen from some 50 companies who flew in at their own expense to explore business opportunities in the country as part of a Kenya-Israel business forum.Muthuuri heads a small business called African Family Health that sells “healthy organic produce grown in Africa by families.” She is looking to export her produce abroad, and believes that Israeli know-how can help her.At the business-to-business meeting, she met with a representative of GreenArava, an Israeli firm already active in Kenya that “develops sustainable agricultural businesses in developed areas and emerging economies.”“I was totally overwhelmed talking to them,” she said, in a hotel ballroom waiting for addresses to the group from both Netanyahu and Kenyatta.“What they do, and the way they describe farming, is nothing like what we do,” she said.Her farms are located in Meru, in a fertile area in eastern Kenya. “We call it the Canaan of Kenya,” she said, chuckling.Muthuuri grows fruits and vegetables, and is currently exporting to the Netherlands.She said she also has subcontracted to other small farms in the area, with an emphasis on contracting with farmers in which one family member has cancer. The reason, she explained, is to provide an income to families burdened with high medical expenses.The businesswoman said she heard about Tuesday’s meeting through the local chamber of commerce and a network of women entrepreneurs, and was interested in doing business with Israel because “it has very good technology.”Plus, she added, “Your economy is driven by exports. If you want to export, you have good expertise on that, as well as good agricultural technology.”She said she would like to get the technology from Israel needed to bring her produce up to international standards, which will enable wider export possibilities.An additional reason she wants to do business with Israel is her Christian faith.“We Christians in Kenya have a lot of attachment to Israel, and that helps in wanting to do business with the country,” she said. “In our minds, you are honest business people. Doing business with Israel would be both good business and spiritual nourishment.”Later in the day, in the same hotel ballroom, Netanyahu met a group of pro-Israel Evangelicals called the Kenya Friends of Israel.Francis Gitau, the head of the group, said to a smiling Netanyahu that his group is pleased the prime minister does not do what is popular, but rather what he thinks is right.Referring to the Entebbe raid 40 years ago, Gitau said to cheers, that ”As watchmen of Israel, we hereby declare that no Jewish blood will be spilled on African soil again.”Netanyahu, who received applause when he said he “brings greetings from Jerusalem and the Land of Israel,” received an even greater ovation when he said that, in today’s Middle East, there is one place in the region “where the Christian community is not only not shrinking, but striving and expanding, and it is safe – and that place is Israel.”