Ehud Barak: "Netanyahu, Bennett, and Shaked will bring us to apartheid." 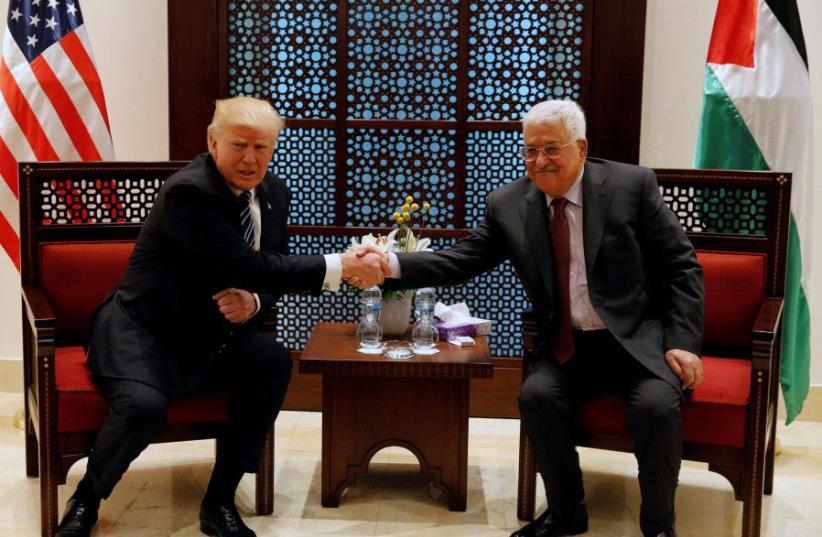 US President Donald Trump shakes hands with Palestinian Authority President Mahmoud Abbas during their meeting at the presidential headquarters in the West Bank town of Bethlehem, May 23, 2017
(photo credit: REUTERS)
Advertisement
Former prime minister Ehud Barak has spoken to advisers to US president Donald Trump, who do not understand concerns in the Israeli government over the formation of a Palestinian state, Barak said in a speech on Monday night.In a lengthy address to the group Commanders for Israel’s Security in Ramat Efal, Barak repeatedly criticized the policies of Prime Minister Benjamin Netanyahu’s government.“The people close to Trump cannot fathom why the government of Israel explains to them that the formation of a tiny, demilitarized Palestinian state would be an existential threat to Israel,” he said.Singling out Bayit Yehudi ministers Naftali Bennett and Ayelet Shaked, Barak said the agenda of Netanyahu’s government is to keep all of the land in the West Bank and build in all of the isolated settlements.“Netanyahu, Bennett and Shaked will bring us to apartheid,” Barak said. “They will continue to take steps against both international and Israeli law, fight the Supreme Court, and fight the press. A healthy society shouldn’t let this happen.”Barak gave as an example the settlement arrangements law that passed in February, which legalized some 4,000 homes in Judea and Samaria. He said Netanyahu himself warned that the law could put Israel on trial in the International Criminal Court and yet he proceeded with legislating it nonetheless.The former prime minister, defense minister and IDF chief endorsed Commanders for Israel’s Security’s initiatives to resolve the Israeli-Palestinian conflict and encouraged the movement to do more to reach out to the Israeli grassroots.When asked about his own political future, Barak, 75, said he “is not entering political activity in any of the parties at this stage.” But he added that “in politics, there are two rules: One that there are no rules and two, that timing is everything.”Former Labor Party minister Haim Ramon warned Labor on Tuesday not to allow Barak to return to the party that he has twice headed.There has been talk in Labor of turning to Barak if whoever is elected in the party’s July 4 leadership race flounders in the polls.