Trump, Israel and the importance of symbols

Israel needs a full bodied hug to feel secure. It is also important for Israel that its enemies see that embrace. 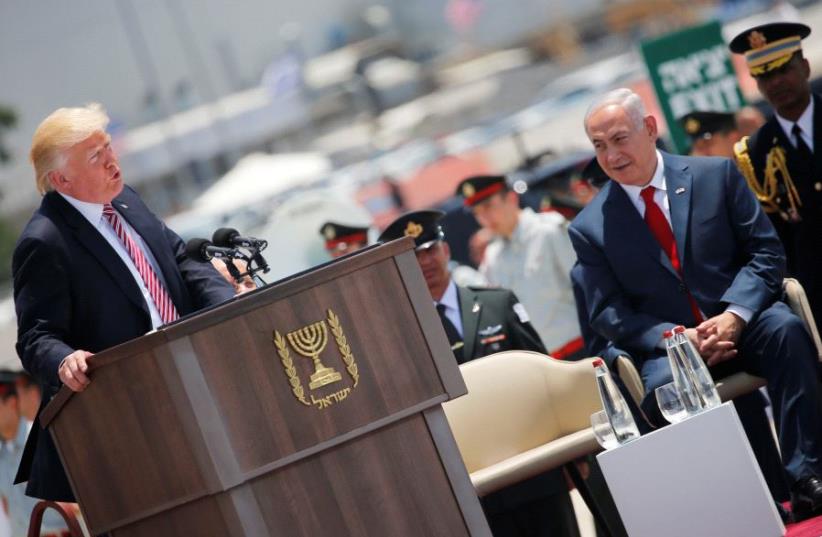 Prime Minister Benjamin Netanyahu (R) listens as U.S. President Donald Trump (L) speaks during a welcoming ceremony upon his arrival at Ben Gurion International Airport in Lod near Tel Aviv, Israel May 22, 2017
(photo credit: REUTERS)
Advertisement
US President Donald Trump’s warm welcome in Israel on Monday undoubtedly will raise hackles among those in the US – including not a few American Jews – who consider the 45th US president a laughingstock.There will be those in the US Jewish community who will not cringe with discomfort – as many Israelis did – at the sight of Likud MK Oren Hazan forcing a selfie on the president, but rather at the whole spectacle of Israel so warmly embracing a man they see as entirely unsuited to serve as America’s president.There will be those who will be embarrassed to hear Prime Minister Benjamin Netanyahu tell the president that “there is no city on earth where you are more welcome, than right here with us in Jerusalem.”
There is a "rare opportunity" for peace in the Middle East - Trump
Why, they ask, is Israel pulling out all the stops to welcome a man who is boorish, unpredictable, and – the hyperbolic among them will argue – a threat to America’s democracy? Why? Because he is the elected leader of Israel’s most important ally in the world, and a man whom with this visit is sending a strong signal to Israel’s enemies that the US stands full-square behind it.This is what Israel cares about, far more than Trump’s firing of former FBI chief James Comey, or his reportedly telling Comey to “go easy” on ousted National Security Advisor Michael Flynn.Comey, Flynn, the appointment of a new special prosecutor to investigate ties between the Trump campaign and Russia, and charges of Trump possibly “obstructing justice” are the stories making the headlines in the US. But while those stories may be bringing him down a peg in the eyes of some Americans, for most Israelis they matter not a whit: what matters is his support, and this trip – both its choreography and his public statements – underscore that support.First there is the very fact of the trip itself.Israelis yearn for a hearty embrace from US presidents. A handshake, a peck on the cheek is not enough for the country’s insecure psyche. Israel needs a full bodied hug to feel secure. It is also important for Israel that its enemies see that embrace.This is one of the problems the country had with former President Barack Obama. It took Obama more than four years to make his first presidential visit to Israel, even though it took him less than six months to visit other countries in the region: Turkey in April of 2009, and Saudi Arabia and Egypt in June of that year. That was noticed in Jerusalem, and elsewhere, and set the US-Israeli relationship off on the wrong foot.Obama came to Israel on the first leg of his first visit abroad in his second term.Trump, in marked contrast, has come on the second leg of his first trip abroad in his first term. And he stressed that fact in public statements.“We love Israel, we respect Israel,” he said upon landing. “And I send your people the warmest greetings from your friend and ally, all of the people in the United States of America.” That is a message Israel is very keen on the world hearing.By its nature, a 28-hour visit is going to be more symbolic than substantive, so the symbols themselves take on greater meaning.His visiting Israel on his first trip was only one symbol. There was also the symbolism of his flying directly from Riyadh to Tel Aviv, believed to the first time this has been done, with the Saudis up until now forbidding any such flights because it might perceived as direct public ties with a country with whom it is still in a state of war.Trump said in the afternoon the Saudis have a “very positive” view of Israel, and this direct flight was a small symbol of changing attitudes.But the most powerful symbol was Trump’s visit to the Western Wall, the first sitting US president to touch the wall’s ancient stones. And although that visit may not have been everything Israel wanted, since Netanyahu was not allowed to accompany him, Trump was met there by the rabbi of the Western Wall, Shmuel Rabinowitz, and was photographed with a kippa on his head, touching the wall and putting in a note.At a time when the Palestinians, and other in the world, are trying to negate Israelis connection to the Temple Mount, that photo sends a very powerful signal to the contrary.