The welcome ceremony for US President Donald Trump's historic presidential visit was held at Ben-Gurion Airport outside Tel Aviv. 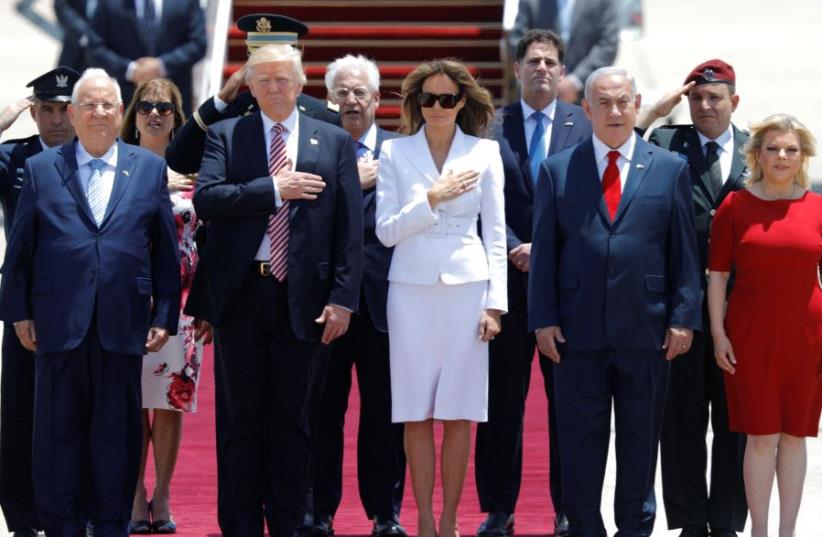 US President Donald Trump (2nd L) and first lady Melania Trump (3rd L) walk with Israeli Prime Minister Benjamin Netanyahu (2nd R), his wife Sara (R) and David Friedman (Center back), the new United States Ambassador to Israel, upon their arrival at Ben Gurion International Airport in Lod near Tel A
(photo credit: REUTERS)
Advertisement
US President Donald Trump and First Lady Melania Trump arrived at Ben-Gurion Airport on Monday, where they were greeted by President Reuven Rivlin and Prime Minister Benjamin Netanyahu.
There is a "rare opportunity" for peace in the Middle East - Trump
After Trump and Rivlin reviewed the Honor Guard, Trump's welcome ceremony began.Rivlin spoke first, lauding the American leader's trip as a symbol of the "unbreakable bond between Israel and America.""The Middle East needs a strong United States. Israel needs a strong United States. And - may I say - the United States also needs a strong Israel," Rivlin said at the welcoming ceremony on the tarmac of Israel's international airport.Rivlin thanked Trump for visiting the Jewish state as part of his maiden foreign tour as president, adding that Israel and its citizens "have great expectations from this visit.""You are the president of Israel's greatest, most important ally. You are a true friend of Israel, and of the Jewish people," Rivlin told Trump. Prime Minister Benjamin Netanyahu was next at the podium, extending his welcome and appreciation to Trump."Your visit here is truly historic. Never before has a first foreign trip of a US president included Israel. Thank you for this powerful expression of your friendship to Israel."Turning to security issues, Netanyahu said, "Israel's hand is extended in peace to all our neighbors, including the Palestinians." He then went on to say that any peace deal would have to mean an end to the conflict once and for all and that "security would have to remain in Israel's hands."Referring to a greater peace in the Middle East, Netanyahu added, "I hope one day an Israeli Prime Minister will be able to fly from Tel Aviv to Riyadh."After expressing the hope that the US president's visit would restart the process of "reconciliation and peace," the prime minister concluded by saying that the relationship between the US and Israel was "ever greater, ever stronger."Then the US president addressed the crowd of dignitaries and politicians at the red carpet greeting ceremony.Trump reaffirmed the "unbreakable bond between Israel and the State of Israel" and appealed to Prime Minister Benjamin Netanyahu and President Reuven Rivlin to work with him toward achieving "security and stability in this region to its people," for the ultimate goal of peace."We love Israel, we respect Israel, and we send your people the warmest greeting from your friend and ally - all of the people of the United States," he said.