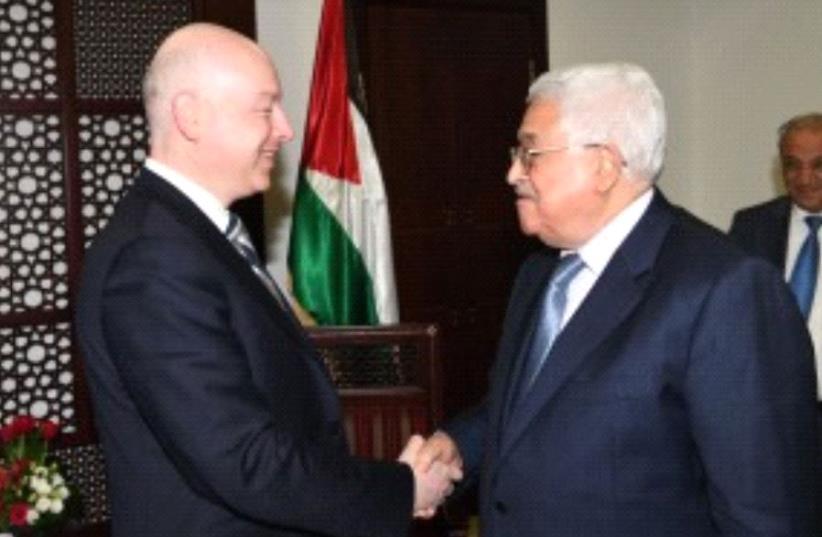 Jason Greenblatt meets Palestinian Authority President Mahmoud Abbas
(photo credit: WAFA)
Advertisement
US Mideast envoy Jason Greenblatt returned to Israel on Thursday and met with Prime Minister Benjamin Netanyahu and PA President Mahmoud Abbas to follow up on conversations they each had with President Donald Trump during his visit.The Prime Minister’s Office provided no details of the meeting. It did, however, deny a report that the US was pushing Israel to transfer parts of Area C – areas under full Israeli military and civil control in northern Samaria – to Area B, territory under Israeli security control but under Palestinian administrative jurisdiction.According to Channel 10, the US was pressing for this move as a goodwill step toward the Palestinians that would go beyond what the security cabinet approved Sunday, just prior to Trump’s arrival.Those measures include keeping the Allenby Bridge crossing to Jordan open around the clock, increasing building permits for the estimated 80,000 Palestinians in Area C and developing industrial zones in the West Bank.Diplomatic sources said the Americans are urging Israel to take concrete steps to improve the situation on the ground, in the hope this might create some positive momentum, and lead Saudi Arabia and other Arab countries to lean on the Palestinians to renew negotiations without preconditions.Bayit Yehudi head Naftali Bennett made clear, however, that any transfer of territory to Palestinian Authority control would cause serious political headaches for Netanyahu.At a Jerusalem Day celebration late Wednesday at Mercaz Harav Yeshiva in the Kiryat Moshe neighborhood, Bennett said: “The days when we relate to Eretz Yisrael like a piece of real estate are over.We will no longer take parts of our land to transfer it to our enemies.”Maariv, meanwhile, reported on Thursday that Likud MK Anat Berko presented a plan to Netanyahu that would transfer control of several east Jerusalem neighborhoods that prior to 1967 were never a part of Jerusalem to Palestinian control.The Palestinians would be responsible for municipal services, health and welfare, and Israel would eventually revoke from residents of these neighborhoods the residency status granted Palestinian residents of municipal Jerusalem.According to the report, Jerusalem and Washington have in recent months discussed the possibility of transferring responsibility for a number of neighborhoods.Netanyahu pointedly pledged on Wednesday during Jerusalem Day celebrations that Israel would always retain sovereignty over the Temple Mount and the Western Wall, but some observers noted that he did not speak about all of east Jerusalem.Berko’s office would not comment on the report. Maariv reported the Prime Minister’s Office as saying that Netanyahu listened to Berko’s plan, as he listens to various suggestions by MKs, but that there has been no change in policy.Abbas – in his meeting with Greenblatt – asked him to talk to the Israeli government about the demands of the hunger- striking Palestinian security prisoners in Israeli jails.“We asked the American side to intervene in guaranteeing [our] prisoners’ rights and achieving their humane demands,” Abbas told the Fatah Central Committee.According to official PA media, Abbas and Greenblatt discussed the hunger strike in depth.Since April 17, hundreds of Palestinian security prisoners, mainly affiliated with Fatah, have been on a hunger strike, demanding that the Prisons Service end its policy of solitary confinement and detention without trial, increase visitation rights and improve amenities. The Prisons Service says its treatment of prisoners meets international standards.Abbas said he hopes to hear back from Greenblatt soon.At a press conference with Trump on Tuesday, Abbas also raised the issue of the hunger strikers.“I call on the Israeli government to respond affirmatively to these humane and legitimate demands,” Abbas said.In the past week, PA officials, including General Intelligence chief Majid Faraj, Preventive Security Forces chief Ziyad Hab al-Rih and Civil Affairs Minister Hussein al-Sheikh, and Israeli officials have been negotiating a possible deal to end the strike.Sheikh, without going into details, told official PA radio on Monday that Israel had responded affirmatively to some of the demands.Meanwhile, Hamas urged Palestinians to take to the streets on Friday in a “day of rage” to support the hunger strikers.“Hamas calls on our people to spark clashes with the Israeli occupation in a ‘day of rage,’” the group said on Wednesday night.