Turkey to Israel: No renewal of ties without unlimited access to Gaza

'Hurriyet Daily News' reports that Erdogan will not accept any Israeli restrictions on the flow of Turkish aid to the Palestinian coastal enclave. 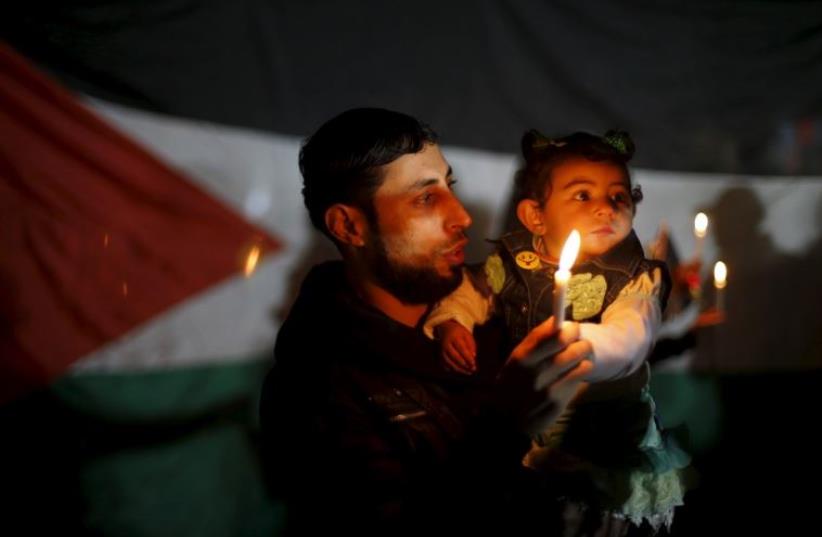 A Palestinian man and his daughter hold candles during a rally to pay tribute to Palestinians who organizers said were killed recently by Israeli troops
(photo credit: REUTERS)
Advertisement
Turkey is demanding that Israel permit unfettered access to the Hamas-ruled Gaza Strip as one of the conditions before it renews diplomatic ties with Israel, according to a report in Saturday editions of the Hurriyet Daily News.The report states that the government of President Recep Tayyip Erdogan will not accept any Israeli restrictions on the flow of Turkish aid to the Palestinian coastal enclave.Turkish negotiators have reportedly presented this demand to Israel in negotiations over the restoration of diplomatic ties that were broken off following the crisis precipitated by an Israeli raid on a blockade-running flotilla bound for Gaza in 2010.Hamas, for its part, has not received any signs from Turkey regarding a rapprochement with Israel and fears Ankara will drop its demand for the lifting of the Gaza blockade as a prerequisite for normalizing relations with Jerusalem, a senior Hamas official said on Wednesday.The London-based online newspaper Rai al-Youm quoted the unnamed Hamas official as saying efforts were under way to “beautify” an Israeli-Turkish accord that would be face-saving for Erdogan.The official expressed concern that Turkey would accept an Israeli offer to ease restrictions imposed on the entry of construction material into the Gaza Strip instead of fully lifting the blockade.Rai al-Youm said Hamas’s biggest fear, however, is that Turkey and Israel would resume their security and military cooperation, which would result in restricting Hamas activities in Turkey.The official said Hamas leader Khaled Mashaal, who met in Istanbul last week with Erdogan, demanded that Turkey refrain from restricting Hamas activities on its soil.Mashaal and other Hamas leaders, including his deputy, Moussa Abu Marzouk, also held talks week with other Turkish officials about the implications of an Israel-Turkey rapprochement.Salah Aruri, a top Hamas operative who was released from an Israeli prison a few years ago and took charge of rebuilding the Islamist organization’s infrastructure in the West Bank, has departed Turkey, an official from the Palestinian group confirmed on Wednesday.News of Aruri’s departure was confirmed by Osama Hamdan, a senior Hamas official, in an interview with the organization’s official bulletin.The report in Saturday’s Hurriyet Daily News, however, claims that the Turkish government never agreed to an Israeli demand to bar Hamas activity on its soil. The newspaper said that Israeli media reports indicating that Ankara would place limitations on Hamas were government-orchestrated distortions aimed at pacifying public opinion in Israel in order to give the impression that Jerusalem had extracted a major concession from Turkey.Amid speculation about whether Israel would ease its blockade of Gaza as part of a deal to normalize ties with Turkey, one government official said last week that Jerusalem has already significantly increased the quantity of goods allowed into the Gaza Strip in recent months.The Istanbul-based Daily Sabah, affiliated with Erdogan’s ruling Justice and Development Party (AKP), reported that Israel had agreed to ease the blockade.Earlier this month, the Prime Minister’s Office said understandings between Israel and Turkey had been reached during secret meetings in Switzerland that would allow for a reconciliation between the two countries.Erdogan has consistently put forward three demands for a normalization of ties: an Israeli apology for the 2010 Mavi Marmara incident; a compensation package for the families of those killed on the ship; and a lifting of the blockade of Gaza.Netanyahu issued an apology in 2013, at US President Barack Obama’s urging, for “any error that may have led to the loss of life.” The sides have reportedly reached agreement on the establishment of a fund of $20 million for the bereaved families.But there was no mention in the PMO statement on Thursday of the Gaza blockade issue, though Israeli officials have said repeatedly that Israel will not lift the maritime blockade and allow cargo into Gaza without security checks.What seems to be emerging, however, is a situation whereby Erdogan will be able to save face by claiming commitments by Israel to continue to allow the transfer of more products overland into the Strip.

Khaled Abu Toameh contributed to this report.
Advertisement
Subscribe for our daily newsletter