The project, backed by Israeli, US, and the EU would allow for the export of goods duty free to the US; Foreign Ministry hosting delegation of Turkish reporters. 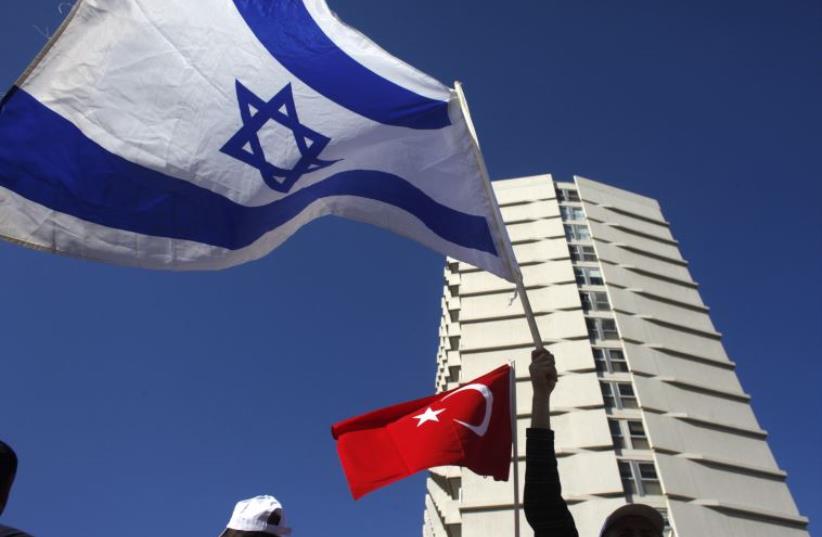 Israeli and Turkish flags [Illustrative]
(photo credit: REUTERS)
Advertisement
A Turkish delegation met in Tel Aviv on Monday with Likud Deputy Minister Ayoub Kara, the acting minister of the Regional Cooperation Ministry, to promote a proposal to build an industrial zone near Jenin in the West Bank.The Turkish delegation included Prof. Guven Sak, the managing director of the Economic Policy Research foundation of Turkey, an economic policy think tank based in Ankara.The proposed industrial zone would cover an area of 1,300 acres initially, and would likely expand later on.The Foreign Ministry had no comment on the delegation, though it is hosting a delegation of Turkish reporters in the country.The Turks purchased the plot from the Palestinians at a cost of $10 million, with the final cost for the project expected to reach $100m.The project, backed by Israel, the US and the EU, would allow for duty-free export of goods to the US.The planned project appears to resemble the successes of the Egyptian-Israeli free-trade areas known as Qualifying Industrial Zones.Oren Kessler, a former Jerusalem Post reporter and now deputy director for research at Foundation for Defense of Democracies in Washington, published an article in Foreign Affairs last week, stating that there are 15 such industrial parks that can export duty- free goods to the US.Turkey has expressed interest in transferring to the industrial center large businesses, including textile and food factories as well a Volkswagen car factory, in order to support the Palestinian economy.“This is a groundbreaking project that will strengthen the Palestinian economy and rebuild the relationship between Israel and its neighbors, particularly Turkey,” said Kara.Foreign Ministry director-general Dore Gold told The Jerusalem Post on Thursday that he is “hopeful that in the not-too-distant future Israel and Turkey will find a way to reestablish their relationship.”Gold, who held secret talks in Rome in June with his Turkish counterpart, Feridun Sinirlioglu, said that regional developments and challenges are compelling Ankara to make some changes of its own.Feridun Sinirlioglu, undersecretary at the foreign ministry since 2009, was named foreign minister until a new government is formed after snap elections called for November 1. He formerly served as Turkey’s ambassador to Israel from 2002 to 2007.“The strategic environment around Turkey is much more complicated than it was two or three years ago, with the rise of ISIS as a challenge to Turkey, not just Syria, and the growth of Iranian power, which is a problem not just for Israel, but for Turkey as well,” Gold said.Herb Keinon contributed to this report .