“Israel has met our terms, paving the way to normalize ties,” he said. “Therefore, we must do this as soon as possible.” 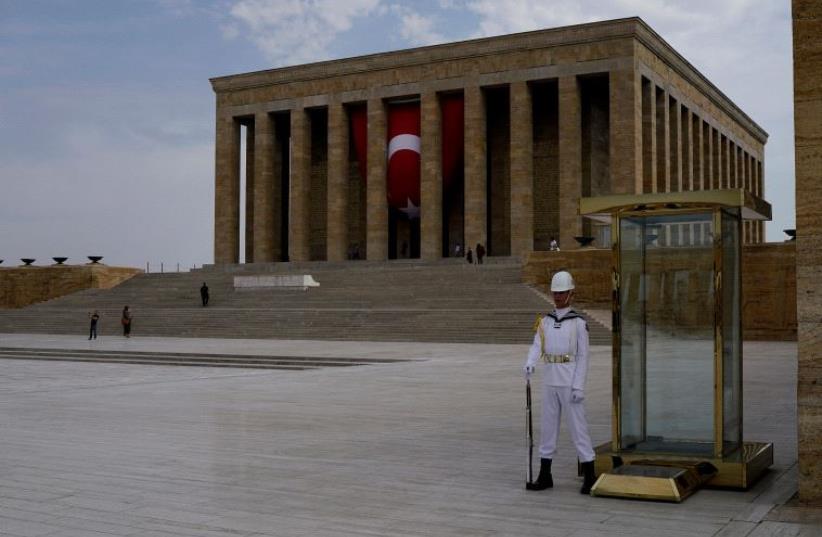 A soldier stands guard at Anitkabir, the mausoleum of modern Turkey's founder Mustafa Kemal Ataturk, in Ankara, Turkey, August 5, 2016.
(photo credit: REUTERS)
Advertisement
The Turkish parliament is expected to pass legislation next week making it impossible for Turks to bring legal cases against IDF soldiers and officers involved in the 2010 Mavi Marmara incident, thereby paving the way for a full normalization of ties.Turkish Foreign Minister Mevlut Cavusoglu, speaking on Wednesday to journalists in Ankara, said the reconciliation issue will be finalized before the Turkish parliament goes into summer recess at the end of next week.“Israel has met our terms, paving the way to normalize ties,” he said. “Therefore, we must do this as soon as possible.”Cavusoglu, meanwhile, met with visiting Palestinian Authority Foreign Minister Riyad al-Malki on Thursday, in what seemed an effort to reassure the Palestinians that the renewal of ties with Israel will not impact on Ankara’s support.Malki was also scheduled to meet with Turkish President Recep Tayyip Erdogan and Prime Minister Binali Yildirim.The Turkish Foreign Ministry issued a statement saying that the two sides “will discuss the recent developments in the context of the Palestinian cause, and the steps which may be taken in the upcoming period about the development of strong support provided by Turkey for Palestine in every area.”The German Press Agency reported that Yildirim also spoke by phone with Hamas head Khaled Mashaal.Under the Israel-Turkey reconciliation agreement, Jerusalem agreed to pay $20 million compensation to the families of the nine Turks killed on the flotilla, but did not agree to Ankara’s demand to lift the naval blockade of the Gaza Strip.The accord agreed upon on June 27 after years of negotiations had a clear sequence stipulating that after the agreement was signed by both countries, it would go to the Turkish parliament, and only after new legislation was passed would ambassadors be exchanged and the ties be formally normalized.The issue was originally supposed to be taken up by the Turkish parliament by mid July, and new ambassadors announced at the end of the month. However, the attempted coup on July 15, and its aftermath, set back the timetable.“In the wake of the failed coup attempt, the Turkish government tried to assure Israel that there was no change of heart on behalf of Ankara regarding the approval of the reconciliation agreement,” Selin Nasi, a columnist for the Hurriyet Daily News and the Turkish-Jewish weekly Salom, told The Jerusalem Post. “Given the strained relations with the West, Turkey is likely to continue normalization efforts with Israel in line with its foreign policy reset put forward by Prime Minister Binali Yildirim as ‘decreasing our enemies, increasing our friends.’”