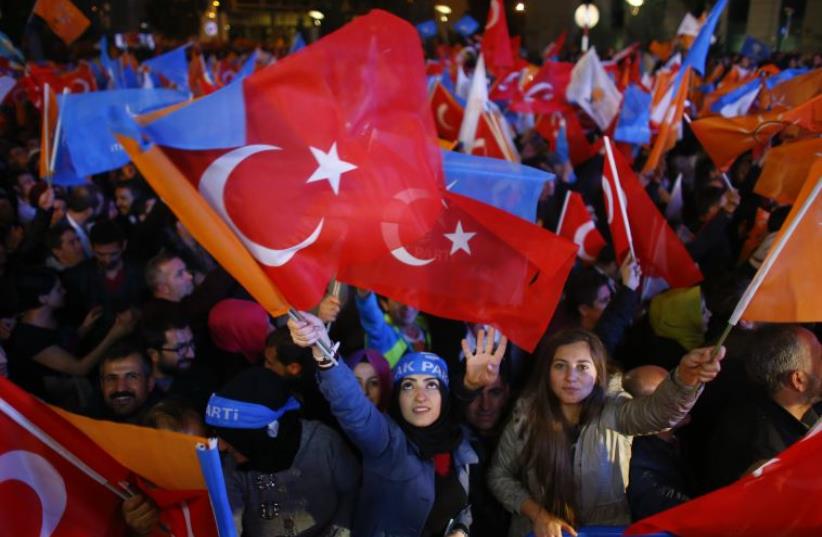 Women wave flags outside the AK Party headquarters in Ankara, Turkey
(photo credit: REUTERS)
Advertisement
Turkey’s parliament on Saturday approved a reconciliation agreement signed with Israel in June, Turkish Prime Minister Binali Yildirim announced, bringing to an end a six-year rift between the two regional powers.As a sign relations have already moved on to a more positive note, Turkey’s Deputy Prime Minister Mehmet Simsek said in a tweet that he hopes to visit Israel in the future.“Reconciliation with #Israel is [positive] for #Turkey & region. l look forward to adding Israel on [to] my Econ road show soon.”In Jerusalem, the Prime Minister’s Office said: “Israel welcomes the Turkish Parliament’s decision to approve the deal recently concluded by the two governments and looks forward to the next steps of its implementation, including the return of our respective ambassadors.”MK Amir Peretz [Zionist Union) called the reconciliation a “positive step,” but warned that “additional measures are needed to build an alliance with the moderate Muslim world, such as resolving the Israeli-Palestinian conflict.”Relations between Israel and Turkey crumbled after IDF soldiers raided the Turkish ship the Mavi Marmara in May 2010 to enforce a naval blockade of the Hamas-run Gaza Strip and 10 Turkish activists on board were killed attacking Israel Navy commandos.Israel, which already had offered its apologies for the raid, agreed under the deal to pay $20 million to the bereaved and wounded in return for Turkey dropping outstanding legal claims.Both countries are to appoint ambassadors under an agreement that is driven partly by the prospect of lucrative Mediterranean gas deals.The accord, signed on June 28, was a rare rapprochement in the divided Middle East, also driven by mutual fears over growing security risks. Two weeks later, more than 240 people were killed in an attempted coup in Turkey.Under the deal, the naval blockade of Gaza, which Ankara had wanted lifted, remains in force.There are three land crossings into the Gaza Strip, two of which are controlled by Israel; the commercial crossing at Kerem Shalom and the pedestrian one at Erez. Egypt also controls a pedestrian crossing at Rafah.Goods and pedestrians enter Gaza through these crossings, but some security restrictions apply.Israel says the Gaza naval blockade is needed to curb arms smuggling by Hamas.The international community has repeatedly called for a lifting of the naval blockade and the restrictions at the Gaza crossings.The reconciliation with Israel comes as Turkey plans to take a more active role in addressing the conflict in Syria.Yildirim said on Saturday that such action would occur in the next six months to prevent the war-torn country from being divided on ethnic lines.Yildirim also told a group of reporters in Istanbul that while Syrian President Bashar Assad could have a role in the interim leadership, he must play no part in its future.Syria’s more than five-year conflict has taken on an ethnic dimension, with Kurdish groups carving out their own regions and periodically battling groups from Syria’s Arab majority, whose priority is to get rid of Assad.Turkey fears the strengthening of Kurdish militant groups in Syria will further embolden its own Kurdish insurgency, which flared anew following the collapse of a cease-fire between militants and the state last year.