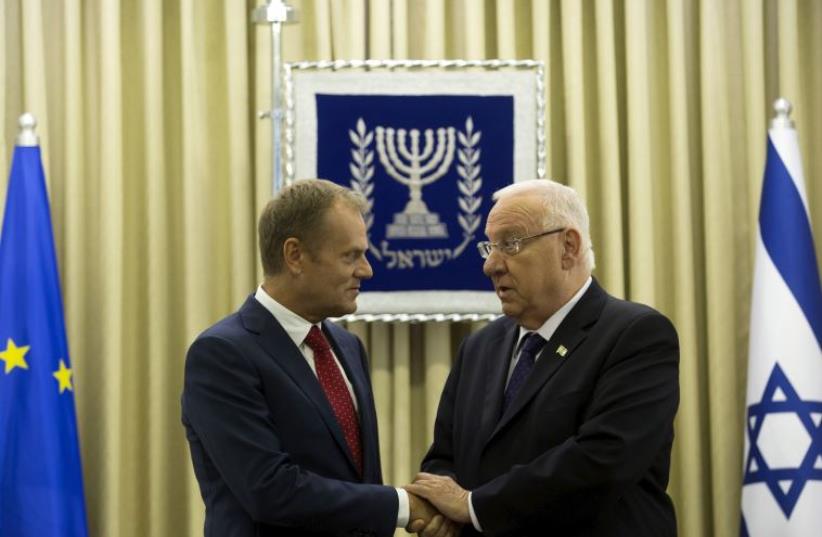 Israel's President Reuven Rivlin shakes hands with European Council President Donald Tusk during their meeting in Jerusalem September 8, 2015
(photo credit: REUTERS)
Advertisement
From prime minister of Poland to president of the European Council, Donald Tusk considers himself to be one of Israel’s best friends.When he called on President Reuven Rivlin on Tuesday in his new role, he wrote in the guest book: “Again in Jerusalem, not as the Polish prime minister, but in my new role, but as always your best friend.”Some minutes later in his opening statement in his discussion with Rivlin, Tusk reiterated this sentiment saying that he was happy to be in Jerusalem again, and that this was the first time that he had come following his appointment to the European Council.“I’m still your very good friend,” he said. “Nothing has changed.”He came to discuss common concerns about the Middle East peace process, saying that “it’s more complex than people think. Nothing is black and white.” New impetus must be given to the process, he insisted.Turning to the refugee crisis in Europe, Tusk termed it a tragic migration and emphasized the need to save people from being victims of human traffic and from death. “Rescuing people’s lives is the most important thing for us,” he declared.With regard to human traffic, Tusk charged smugglers with being directly responsible for the deaths of thousands of people. The refugee crisis is also about security, he said, not just in Europe but also in the Middle East. “We are aware that this crisis is not just an incident but an exodus,” he said.Touching on the subject of Iran, Tusk said that the European Council knows that this is a very sensitive issue for Israel. For Europeans it is like a breakthrough, he said, but it will not be seen as a real breakthrough until Iran changes its attitude towards Israel, and that the change is seen. “We have to respect your arguments and your sensitivities,” he said.In welcoming Tusk, Rivlin expressed hope that the region could emulate Europe with open borders, open trade and a single currency. Before this can happen, confidence must be built up between the Israelis and Palestinians he said. Trade and industry provide a model for peace between the peoples of the region, Rivlin added, commenting that this can be seen in areas where Israelis and Palestinians work together.“Peace cannot be imposed; it must come from the people,” he said. In this context he was adamant that “the labeling of Israeli products will only be a further obstacle to peace.”Rivlin implied that Europe had forgotten its own principles.“Europe must remember its duty to itself, and to the world. It must remember that the dream of different peoples living side by side was not achieved by creating barriers to trade and cooperation, but, by breaking down divides and finding a common dialogue,” he said.Rivlin also expressed his “serious concern” for the circumstances surrounding those fleeing the wars in the region. He was very proud of the fact that Israel as a Jewish and democratic state has given humanitarian aid to thousands of refugees, and said that Israel is ready to continue this important work.Rivlin said that he believed that Israel could provide relief to a proportionate number of those who are fleeing, but did not specify the nature of such aid or what he considered to be a proportionate number.Whether it be in Europe, or the Middle East, “we cannot allow fundamentalists to dictate how we live, and we must continue, to find a way, to live together,” he said.