The plan calls for an end of all claims between Israel and Palestinians, as well as a significant part of the moderate Arab world. 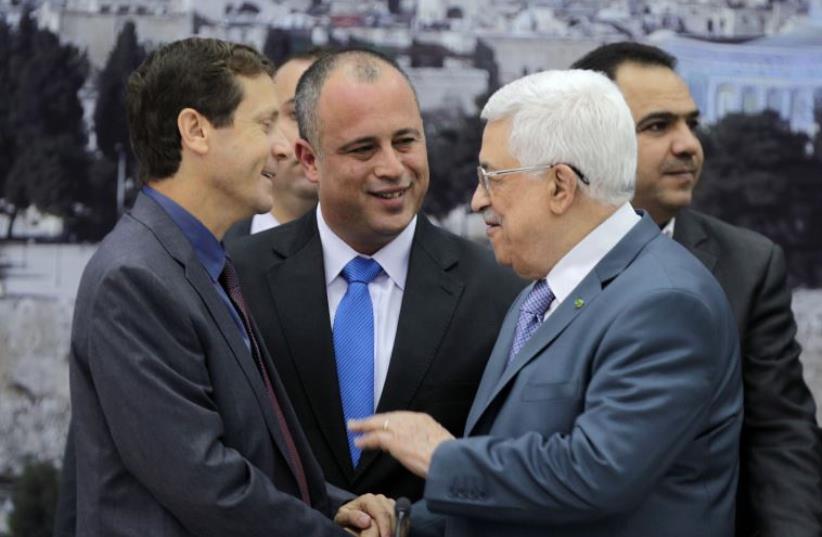 Zionist Union MKs Isaac Herzog (L) and Hilik Bar (C) shake hands with Palestinian President Mahmoud Abbas as they attend a meeting in Ramallah
(photo credit: REUTERS)
Advertisement
The head of the Knesset’s caucus for two states for two peoples, Zionist Union MK Hilik Bar, will reveal his new diplomatic framework at the Knesset Monday at an event together with the head of his party, opposition leader Isaac Herzog.Bar worked on the plan over the past two years as head of the caucus, meeting with dozens of Israeli, Palestinian, Arab and international figures and learning from them how they see the end of the conflict. The result is a framework that is 25 pages in Hebrew and is currently being translated into English.“I worked on the framework because I’m worried the country is going toward diplomatic isolation and the end of the two-state solution,” Bar said. “I always ask the Right what they’re in favor of. My framework solves the conflict, gives the Palestinians a state, and guarantees security for Israel.”The plan calls for an end of all claims between Israel and Palestinians, as well as a significant part of the moderate Arab world. It would keep Jerusalem united without walls but enable both sides to call it their capital. It would keep the refugee problem outside Israel’s borders, and leave most settlers in their homes.“It solves the conflict with a two-state solution while keeping a firm Jewish majority, and it takes the one-state solution off the table immediately,” Bar said. “It explains how to learn lessons from past failures, and presents steps that can already be taken on the ground now, before and during negotiations to promote a two-state solution.”Bar said he would warn at the event about how the Right was leading Israel in the wrong direction.Herzog, who has read Bar’s plan, will back him up.There will also be criticism of Palestinian Authority President Mahmoud Abbas and the international community. Like Prime Minister Benjamin Netanyahu, Herzog, and Yesh Atid leader Yair Lapid, Bar will call for moderate Arab states to take part in the peace process.“Netanyahu talks about how in the Middle East, it takes three to tango – with Israel, the Palestinians and the US,” Bar said. “I envision more of a hora [dance] than a tango, with moderate Arabs and Europe involved. We need to think of a wider circle in order to succeed.”Bar will continue to head the two-state lobby in the Knesset.In the previous Knesset, the rival Land of Israel Caucus was headed by MKs Yariv Levin (Likud) and Orit Struck (Bayit Yehudi). But Levin was promoted to the cabinet and Struck was not reelected.One of the heads of the caucus in the current Knesset is expected to be Bayit Yehudi MK Bezalel Smotrich.