The support for the deal in the security cabinet is not backed up by the public, according to a Midgam poll broadcast Monday night on Channel 10. 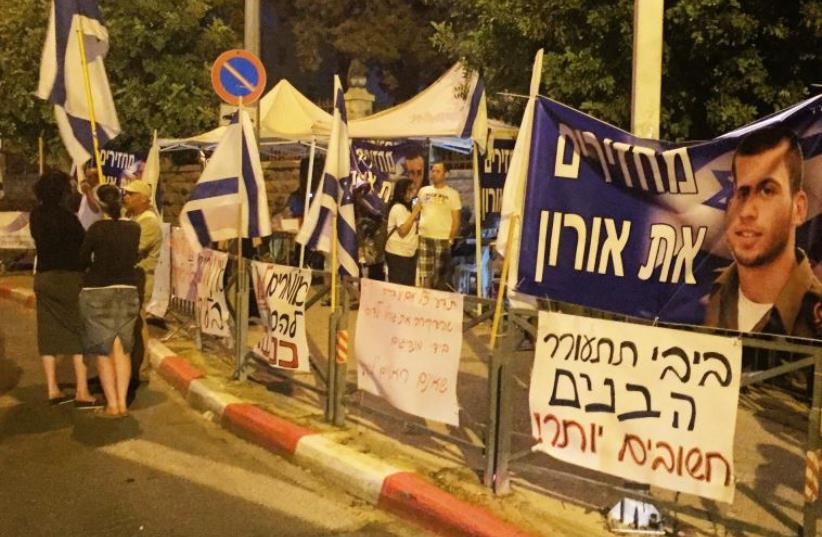 Protest against Turkey deal outside of Prime Minister's Residence in Jerusalem
(photo credit: SETH J. FRANTZMAN)
Advertisement
56 percent of the Israeli public opposes the accord between Israel and Turkey, according to a Midgam poll broadcast Monday night on Channel 10. 33% support it.Among Israeli Jews, 65% are against it and just 24% back it. When asked whether the deal should have been conditioned on the return of the bodies of two soldiers killed during Operation Protective Edge, 72% of Israeli Jews said yes and 14% said no.The poll of 496 Israeli Jews representing a statistical sample of the Israeli population had an error margin of +-4.2%.The strongest condemnation for the deal on the Right came from former interior minister Gideon Sa’ar, who said Israel should receive reparations from Turkey and not the other way around. He said the naval blockade of Gaza was legal and it was violated by a terrorist flotilla.“Erdogan is in a tough situation because of all the fights he started, and we didn’t take advantage of it,” Sa’ar said. “I am not against making a deal with Turkey, but why should we pay for us being attacked? Even one shekel we should not pay.”The opposition to Netanyahu in the Knesset was divided on the deal. Zionist Union leader Isaac Herzog and MK Nachman Shai spoke out against it, while Zionist Union MKs Amir Peretz, Shelly Yacimovich and Tzipi Livni came out in favor.“Turkey is not an ally of Israel anymore but an ally of Hamas,” Herzog said. “The precedent of paying attackers of the IDF is a dangerous precedent, and it will be written in the names of Bennett, Liberman and Netanyahu. Like in the deal he reached to bring back Gilad Schalit deal, Netanyahu has proven he is weak against Hamas.”