Foreign Ministry officials hastened to warn on Tuesday that the soccer brouhaha was just the beginning. 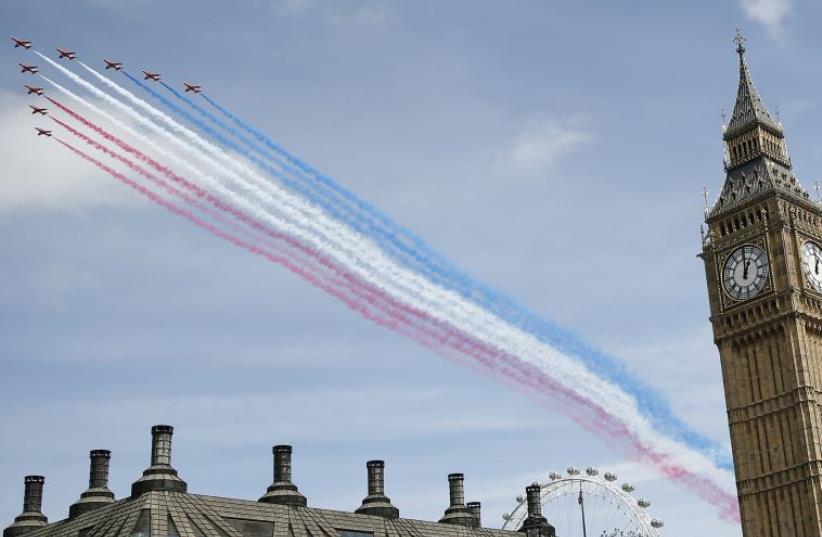 The Red Arrows perform a flypast during an armed forces and veterans' parade on the final day of 70th anniversary Victory in Europe (VE) day commemorations in central London
(photo credit: REUTERS)
Advertisement
Despite Israel’s recent success in foiling the Palestinian attempt to have it booted from FIFA, Foreign Ministry officials hastened to warn on Tuesday that the soccer brouhaha was just the beginning and that Jerusalem will have a difficult time fending off “the diplomatic tsunami.”These warnings appear to be well-founded in light of the decision by a number of western European countries, chief among them France and the United Kingdom, to decline to exhibit their wares at the seventh annual Israel Defense expo, which opened in Tel Aviv on Tuesday morning. The exhibition is considered one of the more prestigious events that attracts visitors eager for a glimpse at the latest in police, military, and paramilitary equipment to hit the market. It is also a venue that affords those in the global arms trade to conduct business meetings.Israel’s defense establishment sees the expo as an opportunity to browse and purchase the most sophisticated innovations from abroad. Yet any defense contractor wishing to erect a booth in the show must first obtain permission from the government in its country of origin. In the days and weeks leading up to this year’s exhibition, a number of companies were denied permission to participate in the Tel Aviv show by the governments of France, Britain, the Scandinavian countries, and other western European nations. One Spanish defense firm will present its wares in a booth but under a different name so as not to risk economic ties with nations that have boycotted Israel.“There are companies that have no desire to attach their names to the expo and to be seen selling offensive weapons to Israel,” a defense official told The Jerusalem Post’s Hebrew-language sister publication Ma’ariv Hashavua.When asked if this was damaging to Israel, the official declined to answer, though it is clear that the absence of leading firms does not allow the defense establishment full access to the most sophisticated products on the market.Israeli officials know that it is logistically impossible to send delegations to 15 expositions worldwide. That means that the absence of leading defense firms in the Israeli show is quite significant. Nonetheless, the organizers of this year’s show anticipate that 250 representatives from 20 countries will be on hand to display their wares, drawing a total of 2,000 visitors from over 100 countries.