One diplomatic official said that Prime Minister Volodymyr Groysman’s rescheduled visit is a clear sign that relations with Ukraine have returned to normal. 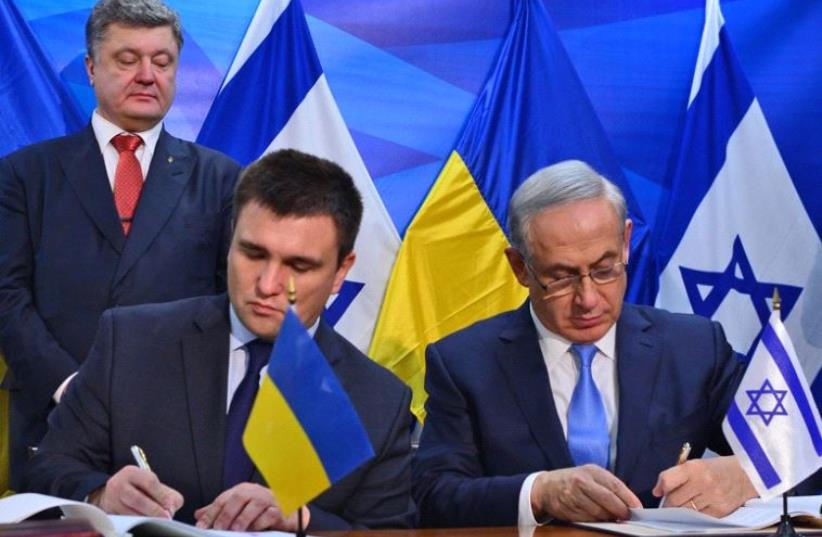 Prime Minister Benjmain Netanyahu and Ukrainian Foreign Minister Pavlo Klimkin sign agreeements as Ukrainian President Petro Poroshenko looks on
(photo credit: KOBI GIDEON/GPO)
Advertisement
Prime Minister Volodymyr Groysman is scheduled to visit Israel in mid-May, a sign that Israel’s anger over Ukraine’s support for UN Security Council Resolution 2443 has subsided.
UN Security Council passes resolution demanding an end to Israeli settlement building
Ukraine was among 14 countries that voted for the anti-settlement resolution in December, in the waning days of former US president Barack Obama’s term. The Americans enabled the passage of the resolution by abstaining on the vote, rather than vetoing it.Immediately after the vote, Israel canceled a planned visit a couple of days later by Groysman, that country’s first Jewish premier. Ukraine fired back at the cancellation by calling in Israel’s ambassador to Kiev for clarifications. It issued a statement saying that it was disappointed at the “emotional reaction of some Israeli officials and politicians” following the passage of the resolution.Israeli officials at the time explained that the decision to cancel Groysman’s visit was part of a policy to send a signal to the world that Israel will begin extracting a price from countries that vote against it in critical votes in international forums. In addition to canceling Groysman’s visit, Jerusalem also recalled its ambassadors to New Zealand and Senegal, two of the four countries that co-sponsored the resolution. Jerusalem has no diplomatic relations with the other co-sponsors, Venezuela and Malaysia.One diplomatic official said Saturday night that Groysman’s rescheduled visit is a clear sign that relations with Ukraine have returned to normal. At the same time, however, he added that there has been no movement regarding returning Israel’s ambassadors to Senegal or New Zealand.The official said that Israel made a distinction between countries, such as Ukraine, that voted for the resolution, and others – New Zealand and Senegal – that actually sponsored it.Groysman is scheduled to visit from May 14 to 16. Among the issues expected to be discussed during his visit are the next round of negotiations over a free trade agreement and talks dealing with efforts to liberalize air traffic between the two countries.In a related diplomatic development, Prime Minister Benjamin Netanyahu is expected to meet with Greek Prime Minister Alexis Tsipras and Cyprus President Nicos Anastasiades in Salonika in July. This would be the third summit between the three leaders in a year and a half: the first took place in Cyprus in January 2016, followed by a second summit in Jerusalem in December.