The UN said that the Civil Administration, the Defense Ministry agency responsible for the West Bank, ordered the razing of 41 structures in the area. 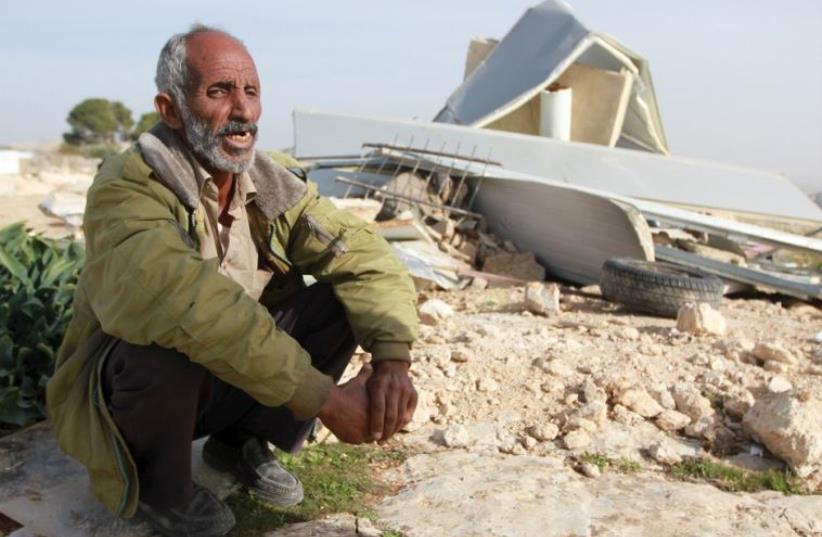 A Palestinian man sits next to the remains of his dwelling after it was demolished by Israeli forces
(photo credit: REUTERS)
Advertisement
The United Nations saw fit on Friday to issue an urgent press release denouncing Israel for "wide-scale demolitions" of Palestinian homes in the West Bank.According to the communique issued by the UN's Office for the Coordination of Humanitarian Affairs, Israeli authorities have accelerated the pace of demolitions in Khirbet Tana, a village just southeast of Nablus.The UN said that the Civil Administration, the Defense Ministry agency responsible for the West Bank, ordered the razing of 41 structures in the area, which is under full Israeli military and civilian control.According to OCHA, the demolitions left 36 people homeless, among them 11 children."Twelve of the demolished structures had been provided by the Palestinian Authority and the Palestinian Red Crescent Society as humanitarian assistance," OCHA said. "One of the demolished structures was a building that had served as an elementary school for nine students.""Khirbet Tana is home to approximately 250 people who rely on herding and agriculture for their livelihood," the agency said. "Because the residents of Khirbet Tana need grazing land for their livestock, most have little choice but to stay in the area. Due to the community’s location within an area declared as a “firing zone” for training purposes, residents are denied building permits and have experienced repeated waves of demolitions, the last one taking place on February 9.""On last Wednesday, the 2nd of March, enforcement measures were taken against six buildings, five tents that were used as pens, five pens and four tents that were built illegally without permits in a firing zone which is a life danger," a spokesperson for the Coordinator for Government Activities in the Territories (COGAT) told The Jerusalem Post on Friday."The enforcement measures were taken after completing the supervision process and issuing demolishing orders," COGAT said.The IDF demolished two illegal Palestinian structures in Area C of the West Bank that were funded by the European Union on the same day that in Davos Switzerland Prime Minister Benjamin Netanyahu met with EU foreign policy chief Federica Mogherini this past January.“Enforcement steps were taken against two illegal constructions which were built without a permit in Rass Azria,” the Civil Administration said.The modular gray structures which were clearly marked with an EU logo housed area Beduins, that live near an unbuilt area of the Ma’aleh Adumim settlement, known as E1.In January, right wing Israeli politicians had accused the IDF of failing to enforce building laws in that area.Atallah Mazar'a, a representative of the Jabal Al-Baba Beduin community said that four structures were destroyed.”They (the Israeli forces) began raiding the houses without prior warning, even the owner of the house was allowed to take little things from his house, and this thing (the house demolition) scared the children, they were affected, they were shouting, and they (the Israeli forces) didn't care for anything. They (the Israeli forces) were treating us violently, and they demolished four houses and left," Mazar’a said.“The houses were funded by the European Union, and they put the European flag in order to be a deterrent to the occupation,” Mazar’a said. Netanyahu has charged that the EU is attempting to create new facts on the ground by supporting illegal Palestinian building in Area C of the West Bank.EU funding of such construction as well as steps it has taken place consumer labels that say “not made in Israel” on products produced over the Green Line have created tension between Brussels and Jerusalem.In January, the foreign ministers of the EU’s 28 member states called on Israel to allow the Palestinians to develop Area C of the West Bank in a statement it issued after its Foreign Affairs Council meeting. It also warned that actions against the Palestinians, such as “demolitions and confiscation - including of EU funded projects” were an obstacle to peace.The IDF has full military and civilian control of Area C of the West Bank, where all the Israeli settlements are located. The Palestinian Authority has full civilian control of Areas A and B, where the bulk of the Palestinian population in the West Bank lives.