US, UN condemn Palestinian terror attack on family of six

At their meeting, Netanyahu and Ban discussed the recent tensions in the West Bank and Jerusalem. 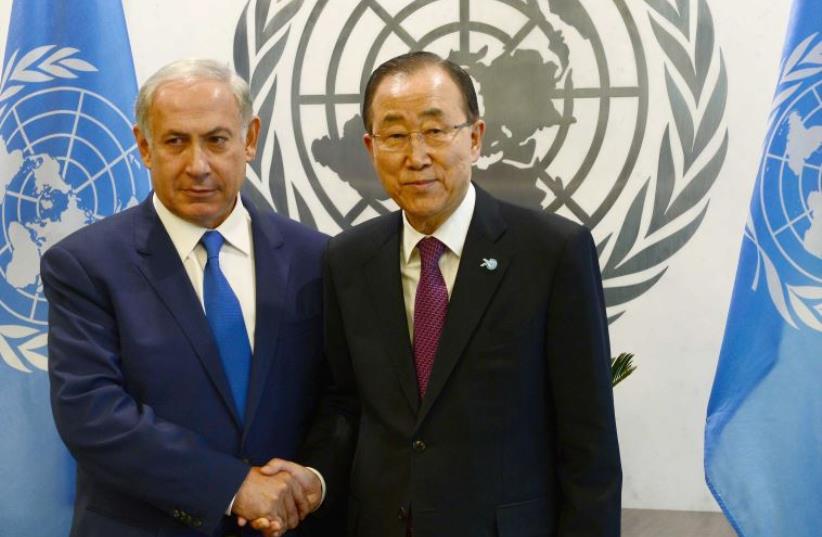 Prime Minister Benjamin Netanyahu (L) and UN Secretary-General Ban Ki-moon meet in New York
(photo credit: AVI OHAYON - GPO)
Advertisement
The United States and the United Nations on Thursday condemned the Palestinian shooting attack that killed an Israeli couple and urged all sides to refrain from continued action that would escalate an already tense situation.
“We extend our condolences to the victims’ family. We urge all sides to maintain calm, avoid escalating tensions in the wake of this tragedy, and work together to bring the perpetrators to justice,” the US State Department said.
The couple, Eitam and Na’ama Henkin, were killed by a Palestinian terrorist as they drove with their four children in the West Bank on Thursday night.
Eitam is assumed to be a US citizen. His mother Channa was born in the US and heads the Nishmat seminary for women in Jerusalem.
UN Secretary-General Ban Ki-moon also condemned the attack during a prescheduled meeting he held with Prime Minister Benjamin Netanyahu in New York shortly after the incident.
During that meeting, the secretary general called on both sides to “prevent any escalation” and said that violence and provocations pose a danger to both Israeli and Palestinian civilians.
Ban also urged Netanyahu to make “significant policy changes that will have a concrete impact on the lives of Palestinians” and “cease all settlement activity and demolitions while enabling access for Palestinians to a fair planning system.”
After the meeting, Netanyahu told reporters, “It’s a difficult day for the State of Israel."He added, “We are witness to an especially heinous and shocking murder in which parents were murdered, leaving four young orphans.
“My heart is with the children, all of our hearts are with the children and the family. The killers knew that they were murdering a mother and father, the children were there.
“It has been proven again that the wild Palestinian incitement leads to acts of terrorism and murder such as we have seen this evening,” Netanyahu said.
Nickolay Mladenov, the United Nations Special Coordinator for the Middle East Peace Process, issued a statement from Jerusalem.
“There is nothing heroic about the killing of civilians. The perpetrators of this violent act must be brought to justice,” he said
“In order to avoid escalation, all must refrain from inflammatory statements and retaliatory action that can only further exacerbate an already tense environment,” he said.
“This tragic incident, once again, highlights the need for significant steps that help stabilize the situation, reverse the current negative trends and restore hope that a just and lasting negotiated two-state solution is possible,” Mladenov said.