On Monday morning, Education Minister Naftali Bennett called on the government to annex Area C of the West Bank. 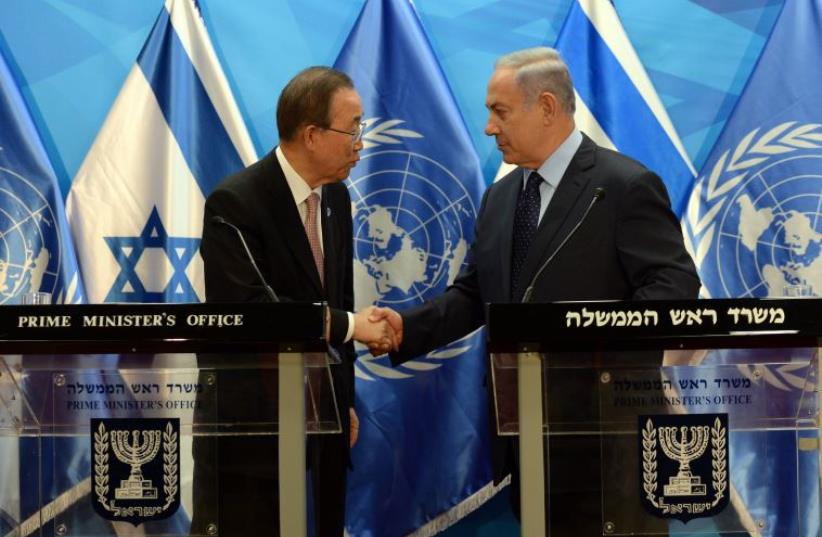 PM Netanyahu and Ban Ki-moon
(photo credit: HAIM ZACH/GPO)
Advertisement
Israel should show it cares about peace by rescinding its decision to advance building plans in the West Bank settlement of Ma’aleh Adumim and Jewish neighborhoods of east Jerusalem, UN Secretary General Ban Ki-moon said on Monday night.“Settlements are illegal under international law,” Ban’s office said. It added that Ban “urges the Government of Israel to halt and reverse such decisions in the interest of peace and a just final status agreement.”Ban’s office issued its statement after Prime Minister Benjamin Netanyahu and Defense Minister Avigdor Liberman agreed to advance plans for 560 new homes in Ma’aleh Adumim, the third largest West Bank settlement.They took that step just hours after right wing politicians from the coalition parties of Likud, Yisrael Beytenu and Bayit Yehudi met in Ma’aleh Adumim.They called on the government to approve new settlement construction in the wake of the two terror attacks last week, that claimed the lives of Rabbi Michael “Miki” Mark, 48, and Hallel Yaffa Ariel, 13.The meeting was held under the auspices of the Knesset’s Land of Israel caucus that has launched a campaign to annex Ma’aleh Adumim.In two weeks it plans to introduce legislation to that effect in the Knesset.On Monday morning, Education Minister Naftali Bennett called on the government to annex Area C of the West Bank. "Israel can weather international condemnation of imposing sovereignty on that portion of the West bank," he said.Separately, there were reports on Monday that before departing for Africa Netanyahu had also approved the building of 240 new homes in the east Jerusalem Jewish neighborhoods of Har Homa and Ramot.Both the terror attacks and the advancement of building plans, comes just four days after the Quartet, of which the UN is a member, published a report condemning both Palestinian violence and Jewish building over the pre-1967 lines.But Ban’s office, in its statement to the media, took issue only with the issue of settlement building and the calls to annex Ma’aleh Adumim and Area C.“This raises legitimate questions about Israel’s long-term intentions, which are compounded by continuing statements of some Israeli ministers calling for the annexation of the West Bank,” Ban’s office said. “The Secretary-General is deeply disappointed that this announcement comes only four days after the Middle East Quartet called on Israel to cease its policy of settlement construction and expansion,” Ban’s office added.