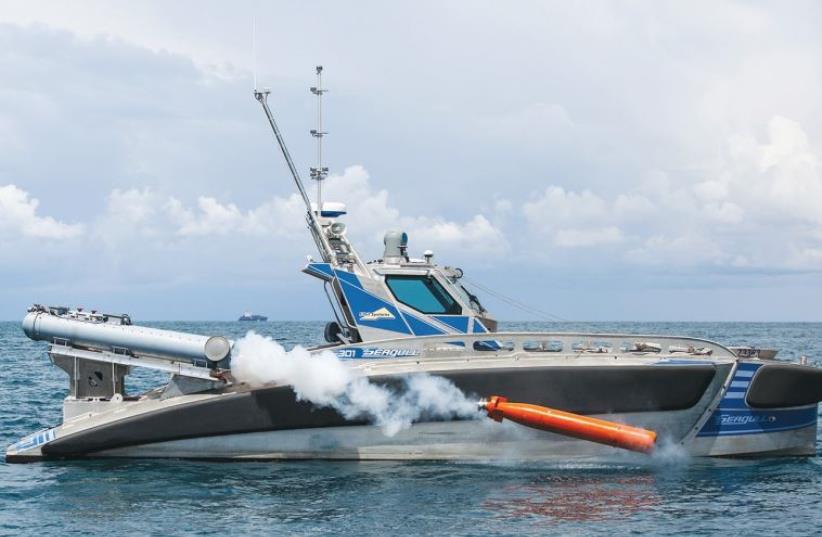 ELBIT’S SEAGULL, seen here in Haifa harbor after its recent initial test, is an unmanned vessel capable of detecting mines and firing torpedoes. (
(photo credit: GALINA KANTOR/ELBIT SYSTEMS)
Advertisement
An Israeli-made unmanned sea vehicle, which will likely enter service in the Israel Navy, held its first torpedo launch test at Haifa port recently.Until now, only manned sea platforms have been able to fire torpedoes.The Seagull Unmanned Surface Vessel, made by Elbit Systems, fired light-weight torpedoes, which could be used to target enemy submarines, during the trial.The Seagull is designed to protect critical sea areas and high-value assets from underwater threats like subs and mines.The navy can use the vessels to help defend Israel’s offshore gas drilling rigs in the Mediterranean Sea against Hezbollah mines, or Iranian submarines.The navy already deploys the unmanned Rafael-made Protector sea vehicles, that come with on-board sensors, and a remote control weapons station.Ofer Ben-Dov, vice president of Naval Systems Business Line at Elbit System’s ISTAR Division, said that “the test highlighted Seagull’s unique capacity to detect and engage submarines, in addition to its ability to detect and destroy sea mines.”He added, “This new and important capability has, to date, only been available to navies through manned vehicles.”Elbit first unveiled Seagull in February, describing it as an anti-submarine platform which can also detect and blow up submerged mines by sending robots and interceptors deep underwater.“We are witnessing the proliferation of submarines, both conventional and nuclear, and sea mines. The cost and risk of dealing with these threats is high,” Ben-Dov said earlier this year. “We consider the Israel Navy and Defense Ministry to be advanced potential milestone clients.”A submarine’s advantage lies in its covert presence, and radar is ineffective in discovering it, he said. Costly task forces, made up of sonar planes and helicopters, or frigates that cost hundreds of millions of dollars to build and operate, have traditionally been used to detect and neutralize such threats.Seagull, which costs tens of million dollars, “changes the balance of power between defender and submarine,” he argued.Seagull is made up of two vessels. One carries two sonar sensors located in the bow and stern, and if suspected mines are detected, a second vessel lowers a robot into the water, to investigate further.Once a threat is confirmed, Seagull launches a miniature torpedo-like weapon to destroy the threat.