The agreement was signed as part of a Knesset delegation to South America, that includes stops in Paraguay and Argentina. 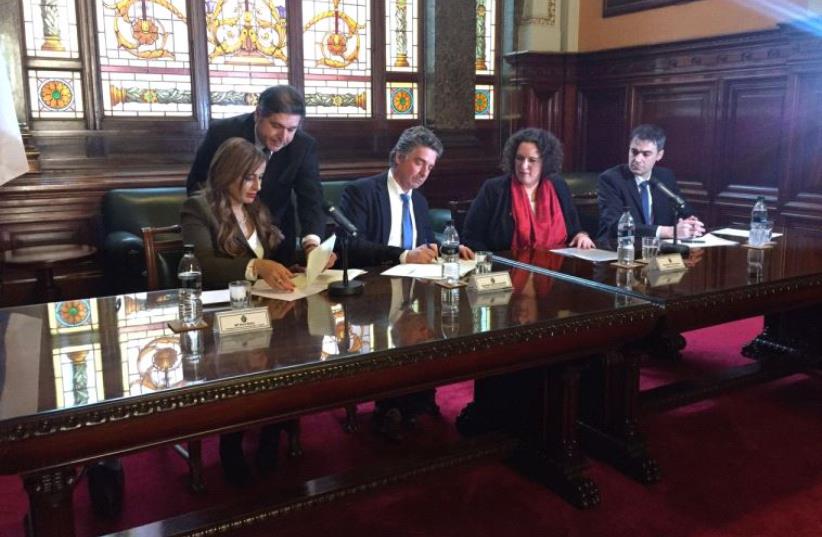 Agreement signing between Uruguay's parliament and the Knesset
(photo credit: Courtesy)
Advertisement
Uruguayan Chamber of Representatives President Gerardo Amarilla signed a memorandum of understanding on Wednesday with MKs visiting Montevideo.Israel-Uruguay Parliamentary Friendship Group chairwoman Nava Boker (Likud) signed the agreement for the legislatures to cooperate on technology and other issues.Boker, along with MKs David Bitan (Likud), Hilik Bar (Zionist Union), Haim Jelin (Yesh Atid) and Hamad Amer (Yisrael Beytenu), visited Uruguay’s capital as part of a South American delegation.The trip also includes stops in Paraguay and Argentina.The MKs briefed their counterparts on the situation in the Middle East and the challenges Israel faces in fighting terrorism.Earlier in the trip, the lawmakers signed a similar agreement with the Senate of Paraguay.The MKs met with Paraguay President Horacio Cartes, who visited Israel last month, as well as with Paraguayan Foreign Minister Eladio Loizaga.Boker called Cartes – who told the delegation he is committed to improving relations between the countries – “a true friend of Israel in South America, who was not afraid to stand by our country many times,” pointing out that he refused to cooperate with other countries in the region who recalled their ambassadors to Israel during Operation Protective Edge.The lawmakers also participated in the dedication of a sculpture depicting a dove of peace on Israel Street in Paraguay’s capital, Asuncion.“Israel’s hand will always be outstretched towards peace,” Boker said.Also this week, a delegation of Likud MKs visited Taiwan.MK Anat Berko (Likud) called Taiwan “a place in which the people have no anti-Semitism, no incitement against Jews and no boycotts of Israel, at all. They have a great appreciation for the State of Israel, true love for the Jewish people, and identification with the suffering we experienced throughout history,” Berko wrote on Facebook.Berko traveled to Taiwan with fellow Likud MKs Sharren Haskel, Nurit Koren and Avraham Naguise. The group met with Taiwanese Foreign Minister David Lee and Science and Technology Minister Yang Hung-Duen.