Israeli and US officials have played down the prospects of any looming announcements on new arms deals. 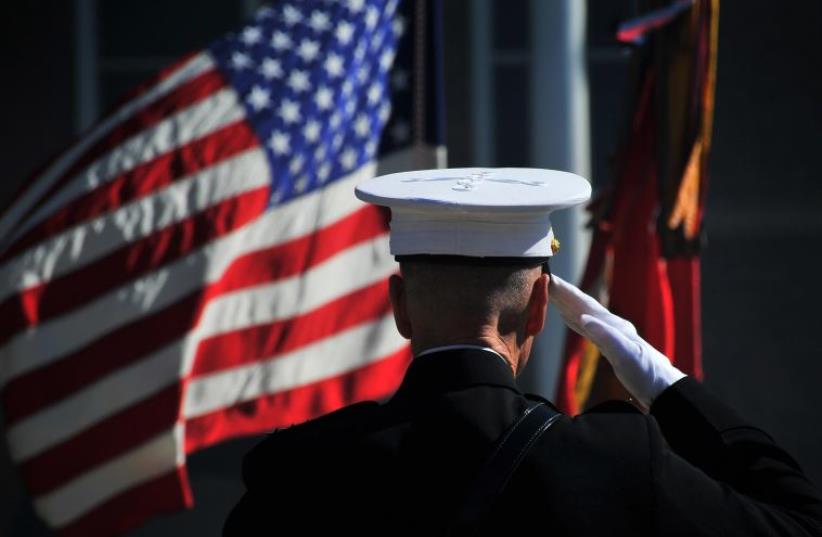 US Marine Corps Gen. James F. Amos, the outgoing commandant of the Marine Corps, salutes the colors during the passage of command ceremony at Marine Barracks Washington in Washington, DC
(photo credit: US DEPARTMENT OF DEFENSE)
Advertisement
US Defense Secretary Ash Carter said it plainly just before landing in Israel, where officials are fuming over the Iran nuclear deal: "I'm not going to change anybody's mind in Israel. That's not the purpose of my trip."Carter, making the first visit by a US cabinet official to Israel since last week's landmark agreement to curb Iran's nuclear program, aims instead to move away from political tensions over the accord to more cool-headed, nuts-and-bolts discussions on deepening security ties.
Yuval Steinitz rejects remarks by John Kerry that a better deal could not have been reached.
Increased US military-related support is expected to be on the table. But Israeli and US officials have played down the prospects of any looming announcements."Friends can disagree but we have decades of rock-solid cooperation with Israel," Carter told reporters traveling with him.Carter's mission will not be an easy one.The United States and Israel fundamentally differ on whether the Iran nuclear deal makes both countries safer. President Barack Obama says it does; Prime Minister Benjamin Netanyahu says it does not.Israel fears that Tehran's economic gains from a lifting of Western sanctions could boost Iranian-backed guerrillas in Lebanon and the Palestinian territories. It could also lead to an arms race with Arab states unfriendly to Israel.Iranian Supreme Leader Ayatollah Ali Khamenei, the highest authority in Iran, did little to alleviate those concerns in a fiery speech marking the end of the holy month of Ramadan on Saturday.Khamenei said the nuclear deal would not change Iran's policy in supporting allies in Syria, Iraq, Bahrain, Yemen, Lebanon and among the Palestinians.Obama has stressed that taking the threat of an Iranian nuclear weapon off the table increases the security of Israel, the United States and its allies. US officials have also signaled they are not changing a longstanding US defense strategy that is underpinned by the threat of a hostile Iran."Neither the deal nor everything else we're doing to advance our military strategy in the region assumes anything about Iranian behavior," Carter said."There's nothing in those 100 pages that places any limitations on the United States or what it does to defend ... its friends and allies including Israel."Carter also cited the US commitment to allies to guard against potential Iranian aggression.A senior US defense official, speaking on condition of anonymity, said Iran was likely to keep trying to take advantage of fragile states in the Middle East, saying: "I don't anticipate a shift in their activities."Israel has a strong army, is believed to have the region's only nuclear arsenal, and receives about $3 billion a year in military-related support from the United States. That amount is expected to increase following the Iran deal, and Carter cited a range of security issues to discuss."We don't have any big package or announcement or thing to bring to the Israelis that we're bargaining over," the senior US defense official said.After Israel, Carter will head this week to Jordan and Saudi Arabia. Iran is the predominant Shi'ite Muslim power, hostile not only to Israel but to Washington's Sunni Muslim-ruled Arab friends, particularly Saudi Arabia.Allies of Riyadh and Tehran have fought decades of sectarian proxy wars in Syria, Lebanon, Iraq and Yemen.Saudi Arabia's Prince Bandar bin Sultan, a former head of the kingdom's intelligence services, wrote last week that the nuclear deal would allow Iran to "wreak havoc in the region."But Saudi Foreign Minister Adel al-Jubeir signaled a willingness during a visit last week in Washington to discuss ways to strengthen security ties.Carter said he aimed to work on advancing commitments made to Gulf leaders in May when Obama hosted them at Camp David.