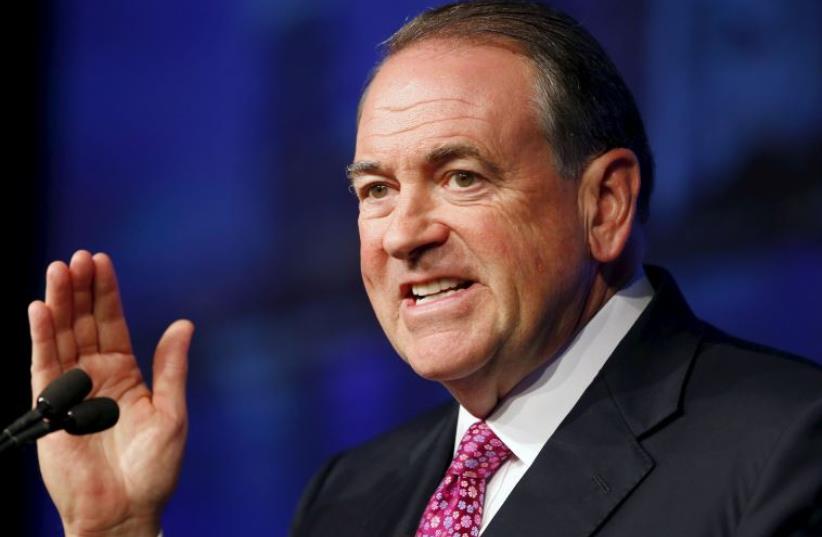 US Republican presidential candidate Mike Huckabee speaks to the 42nd annual meeting of the American Legislative Exchange Council in San Diego
(photo credit: REUTERS)
Advertisement
Republican presidential hopeful Mike Huckabee has come under fire from both Jewish groups and the Democratic party after comparing America’s nuclear accord with Iran to the Holocaust.Speaking with Breitbart News Saturday, the former Arkansas governor called Barack Obama “feckless” and “naive,” adding that by signing the deal the President “will take the Israelis and march them to the door of the oven.”“This is the most idiotic thing, this Iran deal. It should be rejected by both Democrats and Republicans in Congress and by the American people. I read the whole deal. We gave away the whole store. It’s got to be stopped,” he said.Huckabee’s comment drew immediate condemnation from the Democratic National Committee, the National Jewish Democratic Council and the Anti-Defamation League.“From questioning President Obama’s religion to questioning whether or not President Obama loves America to asserting President Obama isn’t an American, we thought we had seen everything from the Republican Party and its presidential candidates,” said DNC chair Rep. Debbie Wasserman Schultz.“But now, the most liked Republican presidential primary candidate Mike Huckabee said that President Obama is marching Israelis to ‘the door of the oven’. This rhetoric, while commonplace in today’s Republican presidential primary, has no place in American politics. Cavalier analogies to the Holocaust are unacceptable. Mike Huckabee must apologize to the Jewish community and to the American people for this grossly irresponsible statement.”The NJDC demanded that Huckabee’s fellow Republican candidates denounce his statement in the strongest terms.”Far, far too often, this organization has found itself forced to denounce politicians for invoking the Holocaust in inappropriate and offensive ways. These comments by Gov. Mike Huckabee, however, may be the most inexcusable we've encountered in recent memory,” the group said in a statement which accused Huckabee of callous disregard for the memory of Holocaust victims.“Whatever one’s views of the nuclear agreement with Iran – and we have been critical of it, noting that there are serious unanswered questions that need to be addressed – comments such as those by Mike Huckabee suggesting the president is leading Israel to another Holocaust are completely out of line and unacceptable,” said ADL national director Jonathan A. Greenblatt.Huckabee has been an outspoken supporter of Israel and has visited the country several times in recent years.During a 2014 press conference in Jerusalem, Huckabee also critiqued American Middle East policy, saying that he didn’t think that talks were “going anywhere at all.”“Nothing has been asked of the Palestinians – nothing. Not one thing. And until there is some understanding that there must be recognition by the Palestinians of the Jewish state’s right to exist, I’m not sure what there is to discuss or negotiate.”He added that he was flabbergasted that Israel is being pressured by the international community to negotiate with an adversary that will not concede its very existence, and teaches its children to celebrate terrorism.“It’s very difficult to negotiate with someone who doesn’t believe you have a right to exist,” he said.Daniel K. Eisenbud contributed to this report.