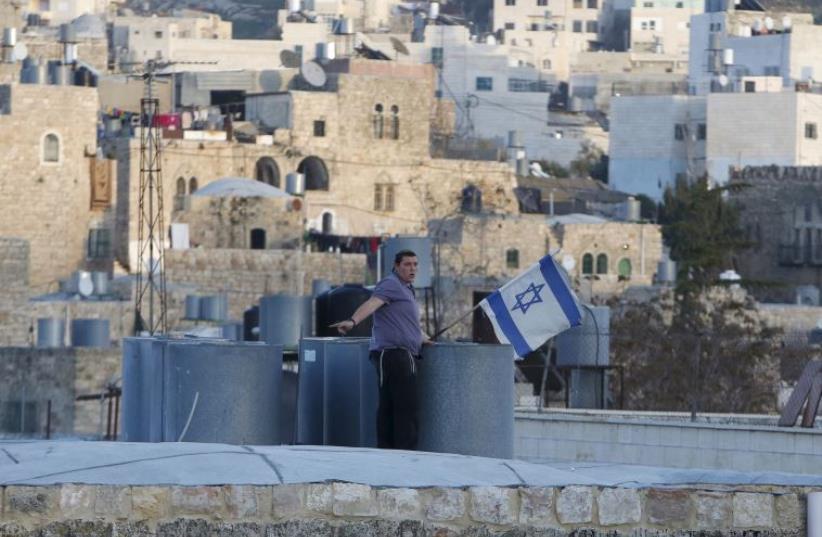 An Israeli settler puts up an Israeli flag over a house, which is disputed between Palestinians and Israelis, in Hebron
(photo credit: REUTERS)
Advertisement
The US is “deeply concerned” by an Israeli plan to build 28 Jewish homes on the site of a former Palestinian bus station in Hebron.As a first step, infrastructure plans can be drawn up, but the project will still need many more approvals before it can be completed.“We’ve said repeatedly such moves are not consistent with Israel’s stated desire to achieve a two-state solution,” US State Department deputy spokesman Mark Toner told reporters in Washington on Tuesday.He spoke against the project that would be housed within an existing military base, Plugat Hamitkanim, which is located next to the Shavei Hevron Yeshiva, situated in the old Beit Romano building.The building plans represent a “deeply concerning step of settlement expansion,” Toner said in response to a reporter’s question.The project, designed for land where six Jewish families now live in caravans, has been put forward by the Jewish community of Hebron along with the Construction and Justice ministries.Peace Now, which has in the past petitioned the High Court of Justice against any civilian use of the site, said that the plans, which came to light just this week, go against past state legal opinions on the matter.Hagit Ofran of Peace Now pointed to an internal 2007 civil administration legal document from the military advocate-general’s office, which states that homes could not be legally built on the site.The state explained that the property where the caravans are located belonged to a member of the old Jewish community in Hebron which fled after the 1929 Arab riots in which 67 Jews were massacred.After the 1948 War of Independence, it passed into the hands of the Jordanian government, under the abandoned property law.The Jordanian Custodian of Abandoned Property then rented it to the Hebron Municipality, which used it as a bus station.The Israeli Custodian of Abandoned Property continued that rental situation when the IDF took control of the area after the Six Day War in 1967. But in 1983, the IDF seized that property and an adjacent Palestinian lot, to create a military base.In 1991 the Justice Ministry ruled that the Hebron Municipality’s rights to the lot, under a protected lease agreement, had expired and that therefore Jewish homes could be built there. But subsequent legal opinions, including the one in 2007, said that the Hebron Municipality still had protected tenancy rights. These rights, the 2007 opinion stated, were superseded only by security needs, such as the ones that mandated the placement of a military base there.In 2008, Peace Now unsuccessfully petitioned the High Court of Justice to raze the homes, but its case was dismissed in 2010.A Justice Ministry source told The Jerusalem Post that the prevailing legal opinion now is that the Hebron Municipality’s protected lease has indeed ended and that Jewish homes could be built on the property that had once been part of the pre-1929 Jewish community there.Peace Now said, “The only thing that changed since the previous legal opinion is the strengthening of the Israeli right wing.“We are witnessing a worrying process of the loosening of legal standards in favor of settlement expansion, including by the legal system itself, which cannot withstand the pressure coming from the government,” Peace Now stated.New government-approved Jewish housing in the city of 215,000 Palestinians and less than 1,000 settlers is rare.The city itself is divided, so that the bulk of it is under the control of the Palestinian Authority, while a small section that houses the Jewish community and the Tomb of the Patriarchs is under Israeli rule.The last such state-sponsored Jewish building project was a small apartment building for eight families, named Beit Menahem, in the Tel Rumeida area of Hebron.