American ambassador to UN says US disappointed “that this council does not acknowledge the violent attacks [by Palestinian armed groups] against Israel.” 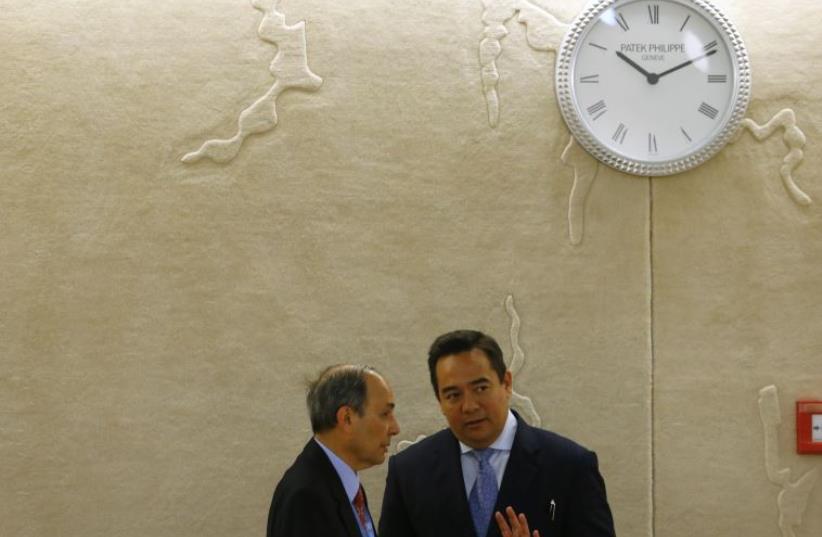 Keith Harper (R), US representative to the UN, talks to Eviatar Manor, Israel's ambassador to the UN [File]
(photo credit: REUTERS)
Advertisement
The United States was the only country to support Israel and to oppose a United Nations Human Rights Council resolution on Friday to hold the Jewish state and Palestinian armed groups accountable for human rights violations during its war with Hamas in Gaza last summer.Some 41 of the UNHRC's 47-member states that met in Geneva approved the Gaza resolution.But although the resolution's text spoke in general terms of “the parties concerned,” it was largely understood to be speaking about holding Israel accountable for possible war crimes.“We are troubled that this current resolution focuses exclusively on alleged Israeli violations, without any expressed reference to Palestinian violations,” US Ambassador to the UN in Geneva Keith Harper said as he explained why his country voted against the resolution.He added that his country was also disappointed “that this council does not acknowledge the violent attacks directed at Israel [by Palestinian armed groups].”Palestinian Authority Foreign Minister Riad Malki welcomed the passage of the resolution. “There is no path to justice and peace without accountability,” Malki said.“We will not accept that the repeated crimes [by Israel] against our people go unpunished,” Malki said.Member states of the European Union, such as Estonia, France, Germany, the United Kingdom, Ireland, Latvia, Portugal and the Netherlands supported the Gaza resolution.Five countries — Ethiopia, India, Paraguay, the Republic of Macedonia, Kenya — abstained.Israel’s Foreign Ministry had expected the resolution to pass, but had hoped to sway EU countries to join the US in voting against it or at the very least to abstain.Prime Minister Benjamin Netanyahu slammed the UNHRC for approving the Gaza resolution.“On the day on which Israel was fired at from Sinai, and at a time when ISIS is committing vicious terrorist attacks in Egypt, as [Syrian President Bashar] Assad slaughters his people in Syria and as the number of arbitrary executions climbs in Iran, the UN Human Rights Council decides to condemn the State of Israel for no fault of its own, for acting to defend itself from a murderous terrorist organization,” Netanyahu said.Israel’s Ambassador to the UN Eviator Manor said that the resolution “is an anti-Israeli manifesto.” PLO Ambassador to the UN in Geneva Ibrahim Khraishi said that everyone was “equal under the law” and that failure to hold Israel accountable for the war crimes it had committed in Gaza created a double standard.Prior to the UNHRC vote, British Ambassador to the UN in Geneva, Julian Braithwaite, said, “Israel has the right to defend itself against indiscriminate attack, but it is also a principle of international humanitarian law that the use of force in self defense must be proportionate.”“International humanitarian law requires belligerents to. distinguish between military and civilian targets. We have urged both sides to the conflict to act in a manner that is proportionate,” he said.According to the UN, during last summer's 50-day war, more than 2,100 Palestinians were killed, of which 1,462 were civilians. Israel lost 67 soldiers and six civilians. It holds that more than half of those Palestinians killed in Gaza were combatants.A report by a UNHRC fact-finding mission that examined human rights violations during the IDF’s Operation Protective Edge in Gaza concluded that both Israel and Palestinians armed groups may have committed war crimes last summer. Friday’s resolution was based on that report, which was published last month. The resolution said there was a “need to ensure that all those responsible for violations of international humanitarian law and international human rights law are held to account through appropriate fair and independent domestic or international criminal justice mechanisms.”It also “called upon the parties concerned to cooperate fully with the preliminary examination of the International Criminal Court and with any subsequent investigation that may be opened” with respect to human rights violations in the Palestinian territories. In addition the resolution called on Israel and the Palestinians to hold internal investigations into alleged human rights violations. Israel has held such judicial proceedings since last summer. The PA has promised that it will do so in the future.The UNHRC resolutions carry political weight. But the UNHRC does not have the authority to ensure compliance with the Gaza resolution or any other resolutions that it has issued against Israel.The Palestinians, therefore, are focused on the possibly that the ICC could accept cases against Israel. The PA, which is a signatory to the Rome Statute that governs the court, has provided the ICC with material to allegedly show that Israel has committed war crimes against its people. Israel, which is not a signatory to the Rome Statute, has not yet formally stated a position with respect to the ICC preliminary examination that is now underway.But it fears that such cooperation would be seen as a de-facto acceptance of the court’s jurisdiction.India said that it had abstained from the vote on the UNHRC resolution precisely because it too, was not a signatory to the Rome Statute.