State Department spokesperson says right-wing government in Jerusalem will be judged by its actions. 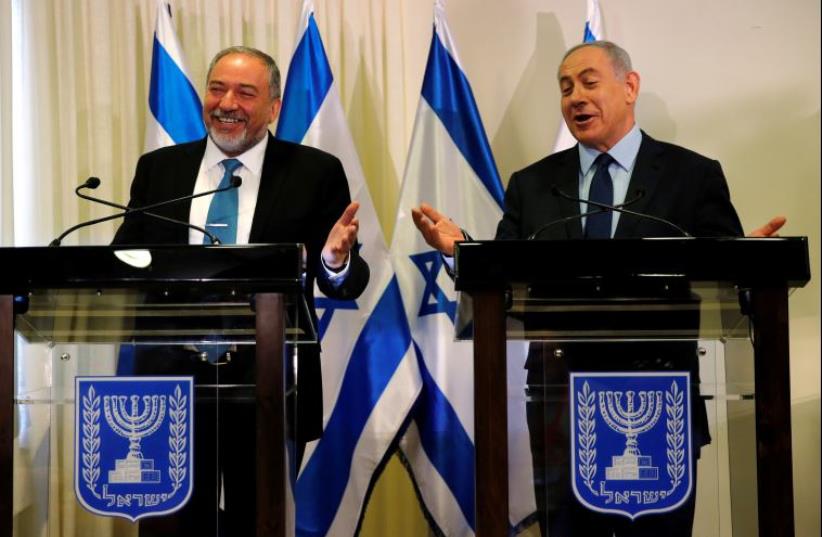 Avigdor Lieberman, head of far-right Yisrael Beitenu party, (L) and Israeli Prime Minister Benjamin Netanyahu
(photo credit: REUTERS)
Advertisement
Reports of Israel's new right-wing governing coalition raise "legitimate questions" about the direction of Israeli policy but the United States will judge the new government based on its actions, the US State Department said on Wednesday."We have also seen reports from Israel describing it as the most right-wing coalition in Israel's history and we also know that many of its ministers have said they oppose a two-state solution," State Department spokesman Mark Toner told reporters. "This raises legitimate questions about the direction it may be headed in ... and what kind of policies it may adopt." Prime Minister Benjamin Netanyahu and Yisrael Beytenu leader Avigdor Liberman signed a deal Wednesday bringing Liberman's party into Netanyahu's coalition and expanding it from a narrow 61 MKs to a more comfortable 66.The political focus then shifted to the next battle- this time between Netanyahu and Bayit Yehudi. Its leader, Education Minister Naftali Bennett, is demanding a change in how the security cabinet functions, in return for the votes of his party’s eight MKs in favor of approving the coalition deal with Yisrael Beytenu.The vote will only take place Monday, leaving plenty of time for the two sides to escalate their fight before resolving it. Bennett's associates said they could not say if there were contacts with Likud about the matter but that he was not the one who would be doing the compromising."We are not playing chicken," a source close to Bennett said. "We are willing to go to that vote and have Liberman not be approved, after which we expect that Liberman will tell Netanyahu to give in, in order to allow the vote to pass."Bennett's associates said his party was not asking for an upgrade, as Kulanu received when Construction Minister Yoav Galant was given voting rights in the security cabinet. They said they were not threatening to leave Netanyahu's coalition, which would still have 61 MKs without Yisrael Beytenu.Some 6000 people have endorsed a letter circulated by Bayit Yehudi on social media endorsing Bennett's demands. Likud Minister Yariv Levin, who has headed the party's coalition negotiating team, said that Bennett's demands were being taken seriously and were important. But he urged Bennett to back down."Preventing the formation of right-wing government is not the way to solve this problem," Levin told Israel Radio Wednesday morning. There was also a dispute with Kahlon, who was angered by a clause in the coalition agreement with Yisrael Beytenu that could support limiting the powers of the Supreme Court. Kahlon wrote on Twitter that he would not let that happen.The coalition agreement gives Liberman the Defense Ministry and MK Sofa Landver the Ministry of Immigrant Absorption. The deal includes an allocation of nearly NIS 1.5 billion for pensions for disadvantaged retirees. It requires Yisrael Beytenu to adhere to decisions made by Netanyahu as communications minister, so the party will not be able to support a bill that would limit the pro-Netanyahu newspaper Israel Hayom.At a Knesset press conference following the signing of the deal that was reached overnight, Netanyahu apologized for insulting Liberman in the past and Liberman promised that his short fuse had been surgically removed.Netanyahu commented on his nearly 30-year relationship with Liberman, underlining that "now we are joining hands to move Israel forward.""We have come a long we way, we worked together for the benefit of the Israeli government. It is no secret that we have disagreed, and sometimes in the heat of the argument, we have both said things we shouldn't have said," he said. "My first priority is to the security of Israel, I as prime minster, together with Liberman as defense minister, the IDF chief of staff and other military commanders will continue to uphold the responsibility to Israel's security," he vowed. "Israel needs the stability of a government to deal with the challenges ahead of us and to seize the opportunities before us," Netanyahu said.Liberman, for his part lauded the coalition agreement, saying he believed it had appeased both his party along with Netanyahu's Likud party."The most important issue was that of the security of Israel's citizens," Liberman stated. "We left everything else aside."Netanyahu reiterated his call for opposition leader Isaac Herzog (Zionist Union) to join in a unity government "that will strengthen the unity of the nation, and that can achieve a peace deal.""Two days ago, Herzog said that there are new opportunities in the region that could bring peace, I agree, and therefore I call on him again to join us in a unity government," he said. Herzog rejected the offer again Wednesday at the Israel Democracy Institute's Eli Hurvitz Conference on Economy & Society, where he said Israeli citizens and the world should worry about a right wing coalition that could lead Israel to "very dangerous places."Yesh Atid blasted the new coalition deal signed on Wednesday with Yisrael Beytenu as a move that "gave up on principles in exchange for seats" in the government's thin ruling majority. "The signing of the coalition agreement to expand the government and bring in Yisrael Beytenu to the coalition is not an achievement but a disgraceful capitulation, a betrayal of public trust and an abandonment of the public," Yesh Atid charged in a statement.