US Treasury Secretary Jack Lew to meet Netanyahu and Kahlon

This is his second official visit to Israel since becoming treasury secretary in 2013. 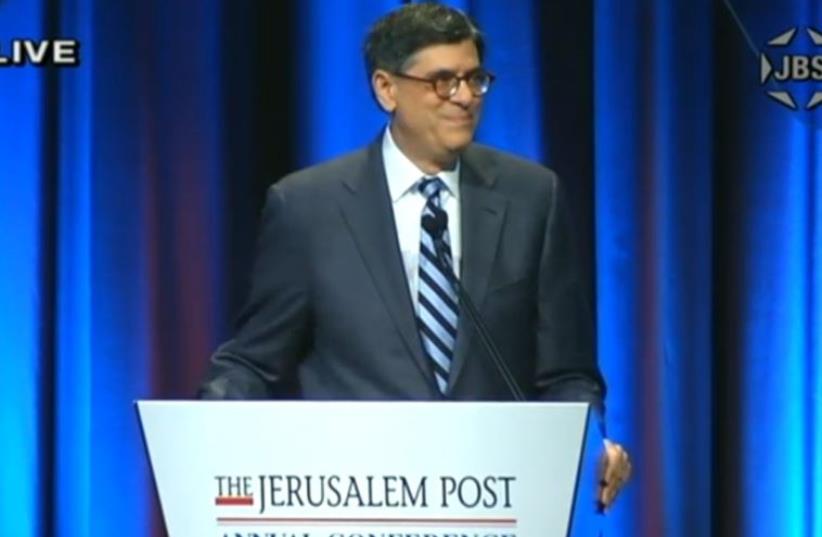 Jacob Lew
(photo credit: screenshot)
Advertisement
In the waning days of the Obama Administration, US Secretary of the Treasury Jack Lew arrived in Israel on Friday as part of a six-day tour that also includes Saudi Arabia and Britain.Lew is scheduled to meet separately Sunday with Prime Minister Benjamin Netanyahu and Finance Minister Moshe Kahlon. This is his second official visit to Israel since becoming treasury secretary in 2013.Diplomatic officials described the visit as “routine.”Lew is scheduled to leave later on Sunday. A statement issued last week by the Treasury Department said “Lew will meet with senior government officials and private sector and non-governmental leaders to discuss policies to promote shared economic growth and stability, to combat terrorist financing and to advance regional and global cooperation.”Lew took part on Thursday in a meeting in Riyadh of the finance ministers of the Gulf Cooperation Council states.At that meeting, he said: “Our collective efforts to combat terrorist financing and disrupt terrorist financing networks are increasingly critical as we confront shifting regional dynamics and evolving threats. As an example of our close cooperation with Gulf partners, the United States and Saudi Arabia recently took collaborative actions to disrupt financial support to Hezbollah through joint designations.”He also related to a new US law that allows American citizens to sue Saudi Arabia for the September 11, 2001, attacks, a bill vetoed by US President Barack Obama, but then overridden by Congress.Lew said the administration believes the law “would enact broad changes in long-standing international law regarding sovereign immunity that, if applied globally, could have serious implications for our shared interests.”Of the 19 al-Qaida terrorists who carried out the attacks, 15 were from Saudi Arabia.“We remain dogged in our determination to hold individuals responsible when they commit horrendous acts and the Obama administration has proven that through our actions, not just our words. However, we believe there are ways to do that without undermining important international legal principles,” said Lew.