Visiting GOP congressman from Florida: Israel has done its utmost to promote peace

"Having a partner and ally in the Middle East who will stand strong for our values is critical and important." 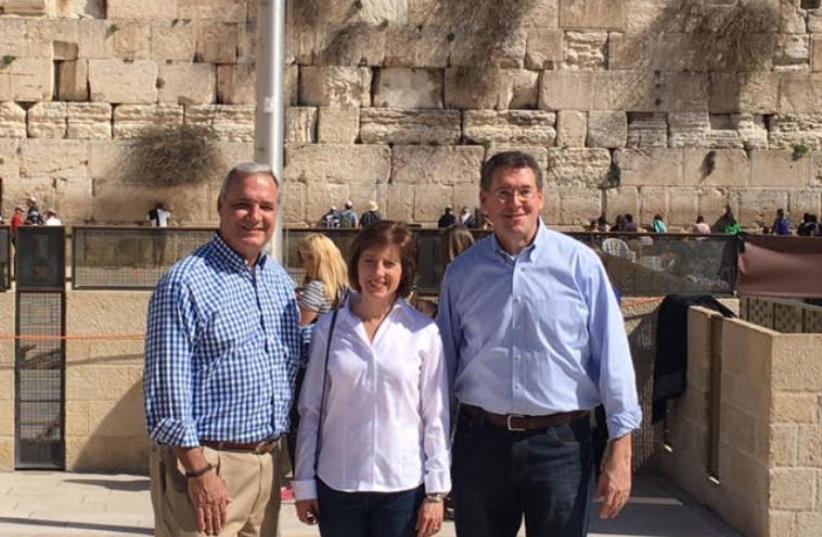 Jeff Miller, Vicky Hartzler, and Gregg Harper
(photo credit: Courtesy)
Advertisement
Israel has done all it can to resolve its conflict with the Palestinians, visiting Republican Congressman Jeff Miller of Florida told The Jerusalem Post during a week long visit to the country.“It is very hard for me to understand what Israel can do more to entice the Palestinian leadership to agree to settle the conflict,” said Miller.“I can’t imagine a people being more cooperative, by giving up lands, voluntarily freezing the building of housing that is so critical at this point in the state of Israel’s life."“As much as it pains me to say that I believe a solution to the conflict is further away today than it has been in past decades, that doesn’t mean we don’t need to keep trying,” Miller said.The congressman came to Israel along with two other Republican colleagues from the US House of Representatives; Gregg Harper of Mississippi and Vicky Hartzler of Missouri.They spoke with the Post on Friday at the Israel Museum in Jerusalem.Harper said he believed that the Palestinian Authority’s incitement against Israel using avenues such as school books made it hard resolve the conflict.“That type of mentality creates a real hardship to try and come up with a way to reach a solution. So it doesn’t mean you give up but it also means you don’t make additional concessions that are a sign of weakness.”Their trip was hosted by the US Israel Education Association, which brings Congressional members to Israel to hold high level meetings and see the country first hand.The trio met with Prime Minister Benjamin Netanyahu, Deputy Foreign Minister Tzipi Hotovely, Education Minister Naftali Bennett, Ariel Mayor Eli Shaviro and Samaria Regional Council head Yossi Dagan. They visited the Old City, the Mount of Olives and the Galilee as well as in Judea and Samaria where they walked around in Ariel, Hebron and a winery in the Gush Etzion region. They said they were opposed to any labeling of West Bank settlement products in the US.Hartzler said that they had visited a factory in the industrial area of the West Bank city of Ariel where Palestinian employees were making good salaries and working side-by-side with Israelis. “So this labeling and boycotting effort hurts everyone and it is just wrong,” she said. “Congress clearly would be opposed to this,” agreed Harper.Miller said he believed the issue can be addressed at the local level with legislation at the state and municipal level. Hartzler added that coexistence effort in Judea and Samaria should be encouraged and that in general Israel should be allowed to develop that area.“We need to change our policies to allow Israel to build there. We need to encourage Jewish families to be able to move there and to live there alongside the Palestinians, to coexist, and that is the best way to move forward rather,” said Hartzler.All three of the Congressman spoke of the strong support for Israel within their party, particularly when compared with the Democratic party.“The US, in a bi-partisan way, supports the state of Israel. But if you had to ask which party supports Israel stronger than, there is more legislation sponsored by Republican members and more issues vetoed by the Obama administration,” Miller said.Hartzler said that the basis of Republican support was religion, economics and national security.“There are many pro-Israel Christian evangelical organizations in America that appreciate Israel and our shared spiritual heritage. [They] want to stand strong for Israel and believe that our country has been blessed because we have been a blessing to Israel,” Hartzler said.Israel also plays a strategic role in the region for the US, she said.“Having a partner and an ally in the Middle East who will stand strong for our values is critical and so important to us,” Hartzler said.The three congressman said they opposed the Iran deal, which was supported by the Obama administration to curb Tehran’s nuclear capacity. “It sends the wrong message to Israel, our greatest ally...We cannot trust or verify anything that they are doing...At the end of the day we are dealing with a nation that is a terrorist nation,” Harper said.Miller added that the International Atomic Energy Agency would have a difficult time making sure that Iran lives up to that agreement.Hartzler said she believed that Iran had already broken the agreement by continuing to test ballistic missiles.“It is a very bad sign they are still chanting death to America and death to Israel,” Hartzler said.“We will continue to do everything we can to get this deal reversed and to hold Iran accountable for it and to make sure they do not continue their own agenda in the Middle East to increase their power,” she said.The trio added that they hoped a Republican president would enter the White House this coming January and restore US standing in the region.“Our allies do not trust us and our enemies do not fear us. This has to be reversed.I believe it can be reversed by proactive solid policy with a leadership from a president who truly in his heart supports Israel and believes in Israel. That is what we will see next year,” Hartzler said.Miller said, “The next administration will have to do a lot of repair work on foreign policy.”