Fabius is on a two-day trip to the Middle East, where he hopes to promote a French-led initiative that would see the peace process relaunched. 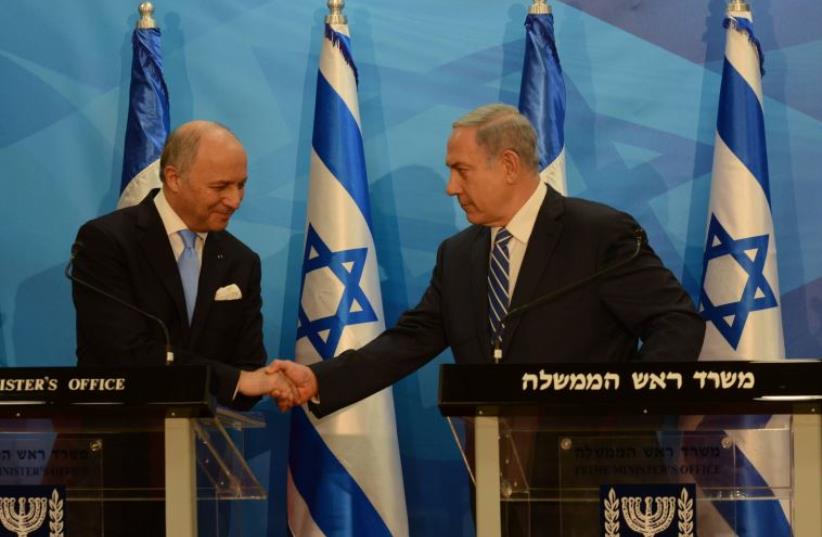 French Foreign Minister Laurent Fabius meets with Prime Minister Benjamin Netanyahu in Jerusalem‏
(photo credit: HAIM ZACH/GPO)
Advertisement
Visiting French Foreign Minister Laurent Fabius presented in broad strokes a new approach to Israeli-Palestinian peacemaking on Sunday, stressing that the French were coming to work together, not compete with, the Americans.At a Jerusalem press conference at the end of a 36-hour visit that took him to Cairo, Amman, Ramallah and Jerusalem, and just after a meeting with Prime Minister Benjamin Netanyahu, Fabius said that the plan has three logical components.The first component is a return to negotiations, something he said that both Netanyahu and Palestinian Authority President Mahmoud Abbas, whom he also met on Sunday, agreed to.“It is important that this be understood,” Fabius stressed.“We don’t want to replace the role of the sides.”The second component, he said, is the establishment of an international committee that will “accompany” the sides and help them get over the “final meters of the negotiations,” which have proved so difficult in the past.He said that the makeup of this committee is not yet determined, but could possibly include the five permanent members of the UN Security Council – France, Britain, the US, China and Russia – as well as some Arab countries and possibly some other European states.Fabius did not spell out why he thought this mechanism would better enable the sides to bridge gaps between them, when over 20 years of oftentimes intensive US efforts to do so have failed.He stressed, however, that the plan is in no way meant to replace the American role, or in any way meant to indicate that the US efforts have been a failure.“We consider as Frenchmen that the US has played, are playing and will continue to play a very important role in the solution of the Israeli-Palestinian question,” he said in English, during a press conference that for the most part was conducted in French with Hebrew translation.The third component of the plan, and the one that has concerned Jerusalem the most over the last few months, would be some kind of UN Security Council resolution to anchor the process.Fabius was vague about the details of the resolution, saying however that Abbas agreed with him that there would be no purpose in bringing a resolution that would be either vetoed by the US or not implemented.The resolution, he said, is “a means, not a goal,” and is not meant to replace the negotiations.Fabius did not give a clear answer when asked whether Palestinian recognition of Israel as a Jewish state would be included in the resolution, as Israel is demanding. He said this is a “difficult and very complicated legal question,” and that a formula must be found. He also said that clarifications are needed to define what in fact “Jewish state” means, and whether only Jews would have rights.“This is a complicated question, and we don’t have the right to decide it,” he said.Fabius said that despite the obvious difficulties, France is determined to play a central role and “will not give up.” He said that neither Netanyahu, Abbas, nor Egyptian President Abdel Fattah al-Sisi, nor Jordan’s King Abdullah, both of whom he met before coming to Jerusalem, voiced opposition in principle to the ideas he put forward.But at Sunday’s cabinet meeting, even before meeting with Fabius, Netanyahu, without directly mentioning the French plan, did come out squarely against any effort to try to impose a solution on Israel.He referred to “international proposals being made to us” that are trying to impose a solution on Israel without taking into account Israel’s security needs or other interests.“They are simply trying to push us into accepting indefensible borders while completely ignoring what will be on the other side of the border,” he said. “The way to reach agreements is only through bilateral negotiations, and we strongly reject attempts to force international diktat on us in regard to both security and peace.Peace will be achieved only through direct negotiations between the parties that will take into account our national interests, especially security.”Then, later in the day standing alongside Fabius at the beginning of their meeting, Netanyahu said that “peace will only come from direct negotiations between the parties, without preconditions. It will not come from UN resolutions that are sought to be imposed from the outside.”According to Netanyahu, Abbas “believes he can avoid such direct negotiations. He wants to avoid the give-and-take of negotiations. And why does he go that route? Because even though the Palestinians ran away from the negotiations again and again and again, it is Israel that is being blamed.”Attempts to impose peace terms on Israel will fail, he said, because first of all Israel will resist it, and secondly because the Palestinians “will never agree to negotiate if they think the international community will give them what they want without negotiations.”Netanyahu made clear that Israel expects the Palestinians to “finally recognize Israel as the nation-state of the Jewish people,” and said it is “frankly inconceivable that while the Palestinians expect us to recognize a Palestinian nation-state, they refuse to accord us the same privilege.”In addition, he said any final peace must be anchored in “ironclad security arrangements.” If not, he said, “such a peace will simply not survive and we will not agree to it.”Netanyahu called on the PA to “unequivocally condemn” the shooting attack on Friday near Dolev and the stabbing attack Sunday at the Damascus Gate in Jerusalem, saying that not only has the PA not condemned those acts of violence, but “it continues unabashedly with its campaign of incitement against Israel and Israel’s civilians.”