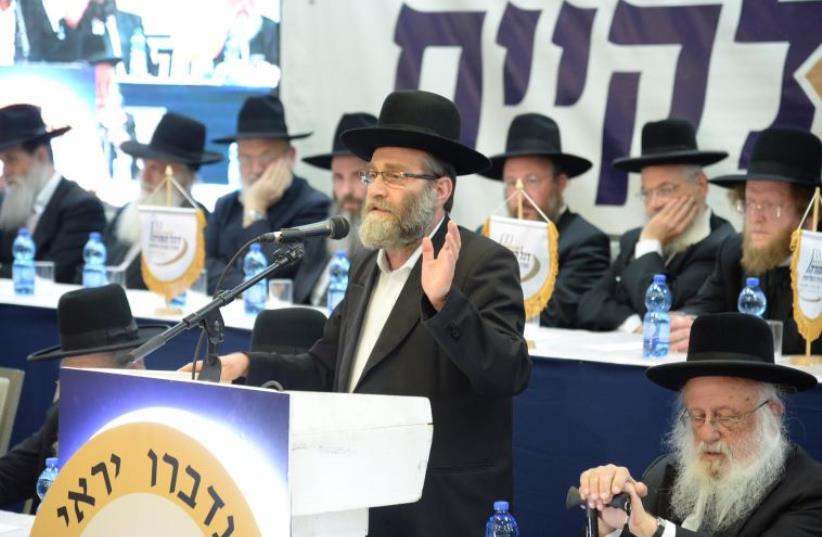 United Torah Judaism MK Moshe Gafni
(photo credit: DEGEL HATORAH)
Advertisement
Senior United Torah Judaism MK Moshe Gafni hinted on Tuesday that his party might be willing to accept the plan for a non-Orthodox prayer area at the Western Wall if it is changed so that there will not be a common entrance to the Western Wall complex for both Orthodox and non-Orthodox visitors.The stipulation in the agreement of a joint entrance for all visitors is one of the critical demands of the Reform and Conservative movements and the Women of the Wall organization, and it is unlikely they will agree to concede on this point.Gafni said that this was the position he and his Knesset colleagues had told Prime Minister Benjamin Netanyahu, but indicated that if this position is adopted it could be possible that the haredi parties would not oppose the rest of the agreement for the pluralist prayer section. The MK was speaking at a conference of the Degel Hatorah political party, a constituent of the UTJ Knesset faction, which represents the Ashkenazi, non-hassidic, “Lithuanian” haredi community. Hundreds of Degel party officials, functionaries, politicos, and municipal council representatives, along with the its two Knesset members, have gathered at Kibbutz Hafetz Haim for the conference, the first since 2002. “We are conducting a war with the Reform, a war that will go on for generations,” said Gafni, known for his fire and brimstone orations.The MK referenced the recent agreement to create a government recognized egalitarian prayer section at the Western Wall, and in particular the consultations being conducted by Netanyahu’s bureau chief David Sharan to try and change the plan, following the extreme objections of the haredi parties. Gafni spoke specifically about a key condition of the non-Orthodox movements for the deal, which is that there be a common entrance  at the Western Wall complex to both the central prayer area of the site and the pluralist section. “They can go wherever they want, they can do whatever they want but not together with us. We will not allow them to be with us in any way. Not at the entrance to the Kotel, not at the exit, we won’t allow in any way recognition of the Reform, and not those similar to them.“This is what we told the prime minister, and this is what we say now on this holy platform. And the High Court won’t help, The High Court can rule whatever it wants, we will continue on our path… as we have been instructed by our rabbis.” He elaborated later that the issue of a joint entrance was something that had been explicitly rejected by the late haredi rabbinic leader Rabbi Shalom Yosef Elyashiv when the issue while he was still alive“The world could turn upside down, but we will not enter together. In everything we do we distance ourselves from them. If they are far from us, we don’t want to be together with them for anything. We don’t want this partnership. Why do they want to be with me? I’m a racist!” he declared sardonically.”Gafni said that if this change is accepted then further deliberations would be needed to decide on who will manage the non-Orthodox site, but indicated that an agreement on this outline would be possible.