Protestors chanted in Hebrew and Arabic for social justice and peace, arguing that the new minister should resign. 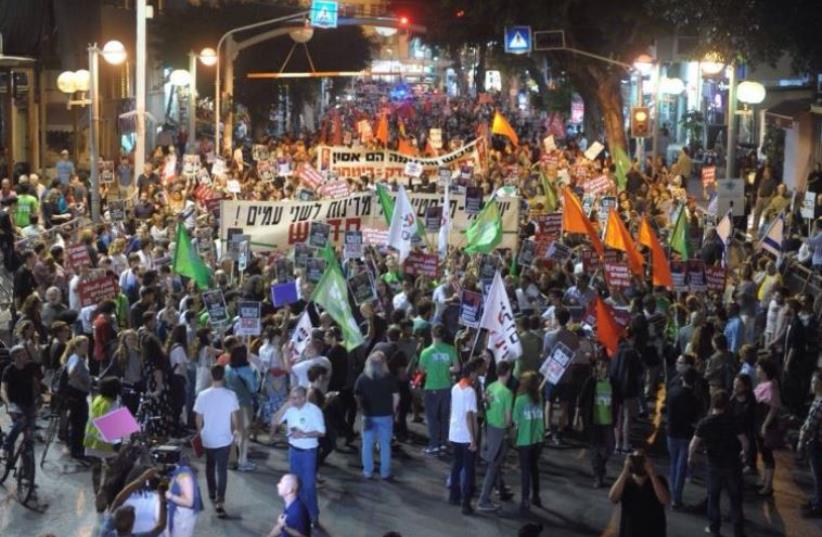 Protest against Liberman's appointment
(photo credit: AVSHALOM SHOSHANI)
Advertisement
Approximately 2,500 people protested against the appointment of Avigdor Liberman (Yisrael Beytenu) to the position of defense minister in Tel Aviv  on Saturday night.Protestors chanted in Hebrew and Arabic for social justice and peace, arguing that the new minister should resign.MK Zehava Gal-On, chairwoman of the leftist Zionist party Meretz, told The Jerusalem Post's sister paper Ma'ariv: "It is exciting that thousands of Jews and Arabs have told (Prime Minister) Netanyahu that his defense minister is not a legitimate choice."The most racist and corrupt man has received his portfolio only for political survival, and we say to him 'stop, get out.'"MK Ayman Odeh, who heads the Arab Joint List, added, "We believe that only through a joint struggle of Jews and Arabs can we succeed."We reject the belief that all Jews are against all Arabs, and that all Arabs are against all Jews. The struggle against racism needs to be shared."Referring to the different camps often referred to in Israel's domestic politics, Odeh said, "we have the Nationalist camp, the Zionist camp, we're building the democratic camp."