The inauguration of the embassy comes as Brazil and Israel tussle over Prime Minister Benjamin Netanyahu’s nominee to fill the vacant Israeli envoy position. 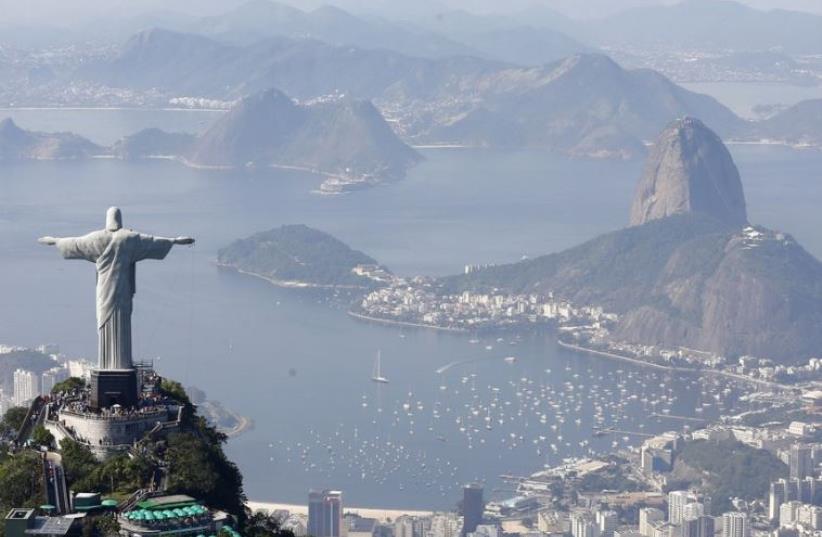 Tourists visit the Christ the Redeemer statue with Sugarloaf Mountain (R) in the distance in Rio de Janeiro
(photo credit: REUTERS)
Advertisement
RIO DE JANEIRO — A new building housing the first Palestinian Authority embassy in the Western Hemisphere was inaugurated in Brasilia.The PA’s envoy to Brazil, Ibrahim Alzeben, led Wednesday’s event, which was attended by leftwing Brazilian government officials, representatives of Arab countries and members of the local Arab community.A week earlier, Alzeben attended the International Holocaust Remembrance Day ceremony held by the Jewish community in the Brazilian capital, saying “I could not be absent. It is very important to remember this date.”The inauguration of the embassy comes as Brazil and Israel tussle over Prime Minister Benjamin Netanyahu’s nominee to fill the vacant Israeli envoy position. The closeness of the new embassy to major Brazilian governmental buildings, including the Planalto Palace, Congress, Supreme Court and ministries, has been widely criticized due to security concerns.“Diplomats and their vehicles cannot be checked. The embassy is a sovereign Hamas area now,” an unnamed military source told Brazil’s Veja magazine in an article published last year. “The site is strategic. Terrorists could access the whole governmental structure in a half an hour.”Built on a piece of land that is more than 17,000 square feet and donated by the Brazilian government when it was led by former President Luiz Inacio Lula da Silva, the space is considered large in comparison to other diplomatic missions. Topped with a golden dome, the building resembles the famous mosque on the Temple Mount in Jerusalem. Palestinian Authority President Mahmoud Abbas laid the cornerstone for the building in 2011.Bilateral relations between Brazil and the Palestinians date back to 1975, when the Palestine Liberation Organization was authorized to appoint representatives in Brasilia. In 1993, Brazil authorized the opening of the Palestinian Special Delegation in Brasília, whose status was equated to embassy in 1998. In 2004, a representative office of Brazil in Ramallah was opened.After Brazil recognized a state of Palestine in December 2010, the Special Delegation became the Embassy of Palestine.Israel has not had an ambassador in Brasilia since December. Prime Minister Benjamin Netanyahu’s nomination of Dani Dayan, a former settler leader in the West Bank, remains unapproved by Rousseff since August and has set off a diplomatic row.