Will Germany's president also choose Breaking the Silence over Netanyahu? 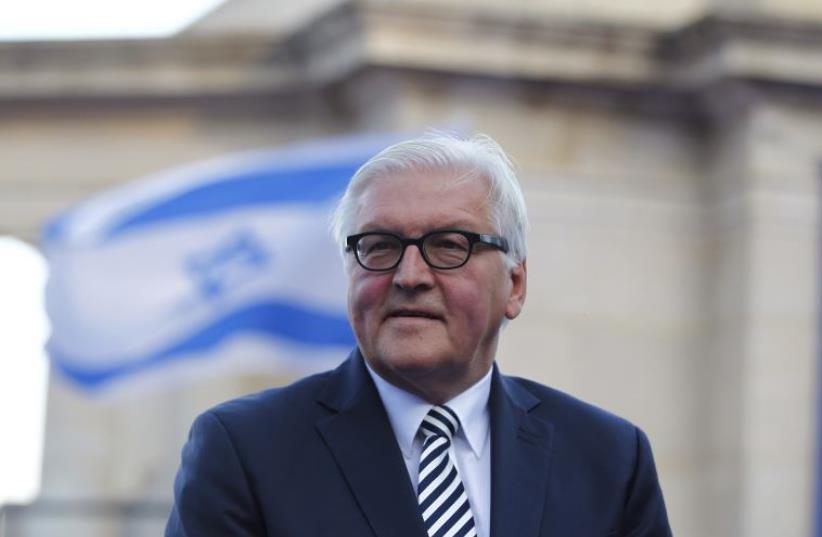 German Foreign Minister Frank-Walter Steinmeier attends the Hebrew University of Jerusalem's annual Convocation ceremony
(photo credit: REUTERS)
Advertisement
German President Frank-Walter Steinmeier is scheduled to arrive in Israel for a three-day visit next week, and as of Sunday, neither Israeli nor German officials could say categorically whether he would be meeting with Breaking the Silence.The decision by German Foreign Minister Sigmar Gabriel to meet with far-left group Breaking the Silence during his visit to Jerusalem last week led Prime Minister Benjamin Netanyahu to cancel a meeting with Gabriel, saying that he will not meet officials giving legitimacy during their visits to organizations trying to defame IDF soldiers.A representative at the German Embassy said that Steinmeier’s schedule is still being put together, and there was no formal decision yet on with whom, or with what organizations, he will meet.
Netanyahu snubs German minister over plan to meet far - left groups like Breaking the Silence (credit: REUTERS)
While a visit by Germany’s president is generally only a symbolic one, because the chancellor – not the president – is the head of the government, Steinmeier’s visit has suddenly taken on increased import as a result of the bad aftertaste following Gabriel’s visit.Steinmeier, according to one diplomatic official, is a friend of Israel, “more so than Gabriel,” and there is a sense that – if he desires – he can take steps to clear the air and put the ties between Berlin and Jerusalem back on a better footing.What is not clear, however, is whether that is what he wants, especially since officials in Jerusalem are saying that a sharper line toward Israel may serve the electoral interests of Steinmeier’s Social Democratic Party – which is also Gabriel’s party – in its race against German Chancellor Angela Merkel’s Christian Democratic Union in September’s elections.Meanwhile, Gabriel came under fire from the Simon Wiesenthal Center and German NGOs on Friday for his alleged belittling of the Holocaust, in which he wrote that Jews and Social Democrats were equally victims of the Nazis.Gabriel wrote in an opinion article in the Frankfurter Rundschau daily on Tuesday that “Social Democrats were, like the Jews, the first victims of the Holocaust. The Social Democrats were the victims of political persecution, the others [Jews] were victims of race madness.”Dr. Efraim Zuroff, the head of the Simon Wiesenthal Center’s Jerusalem office, told The Jerusalem Post that “anyone with knowledge of the Final Solution is aware of the fact that the fate of European Jews under the Nazis was different than any of the other victims of the Nazis.”Zuroff, who is the Wiesenthal Center’s chief Nazi-hunter, said Gabriel’s assertion is an “abuse of the memory of the Holocaust.”Gabriel’s article appeared in newspapers in Cologne, Frankfurt and Berlin.Dr. Elvira Grozinger, the head of the German chapter of Scholars for Peace in the Middle East (SPME), told the Post: “Our minister of foreign affairs seems to have no idea of what the Holocaust meant for the Jews. The Social Democrats were political opponents and therefore – as in any other dictatorship – unwanted and imprisoned, but were never systematically gassed. Six million dead Jewish victims including over 1 million children.”She said, “The comparison of these Jewish victims who were murdered just because they were born as Jews, and Social Democrats as political opponents in the Third Reich is therefore not acceptable. It is a symptom of lack of historical and social differentiation which disqualifies such a member of government as a minister.”SPME has 50,000 members worldwide.A representative of the Foreign Ministry in Berlin told the Post, “Foreign Minister Gabriel is a close friend of Israel and has always unambiguously embraced German responsibility for the Holocaust and for the security of Israel. There can be no doubt about this.The foreign minister again made this a point of his visit to Yad Vashem on Yom Hashoah [Holocaust Remembrance Day].”Gabriel was the subject of a scandal in Israel last week because he refused to cancel meetings with far-left NGOs that seek, according to Prime Minister Benjamin Netanyahu, to delegitimize the Jewish state and the IDF. Netanyahu protested Gabriel’s meeting with the NGOs Breaking the Silence and B’Tselem – The Israel Information Center for Human Rights in the Occupied Territories by canceling his meeting with Germany’s top diplomat.Gabriel’s alleged playing down of the Holocaust prompted criticism in the media and among historians. The popular Der Spiegel columnist Sascha Lobo tweeted, “We were however also Holocaust victims!!! – wrote the German Social Democratic foreign minister about Israel. Unbelievable.”Wolfgang Wippermann, a professor of history at the Free University in Berlin, called Gabriel’s parallel “terrible.”Michael Spaney, the executive director of the Mideast Freedom Forum in Berlin, told the Post: “The FM’s statement clearly shows how he misunderstands the Holocaust as something as a general catastrophe that can happen to anyone. And how he disregards the centrality of antisemitism to the Nazi ideology. No wonder he disregards the antisemitism of Israel’s enemies. No wonder he fails to see that it is not Israel that is responsible for the collapse of negotiations for a two-state solution.”Spaney added, “Gabriel said that Netanyahu rejected the meeting this week for domestic [political] reasons, while he himself is using the scandal for the Social Democrats’ election campaign in Germany.He used his post to play party politics in order to gain support with his electorate when he was expected to have a first meeting with his Israeli colleague. Taking into account his latest statement about the Holocaust one can definitely say that he is unfit for the post of Germany’s top diplomat.”