With Iran deal through Congress, Netanyahu to meet Kerry, Obama 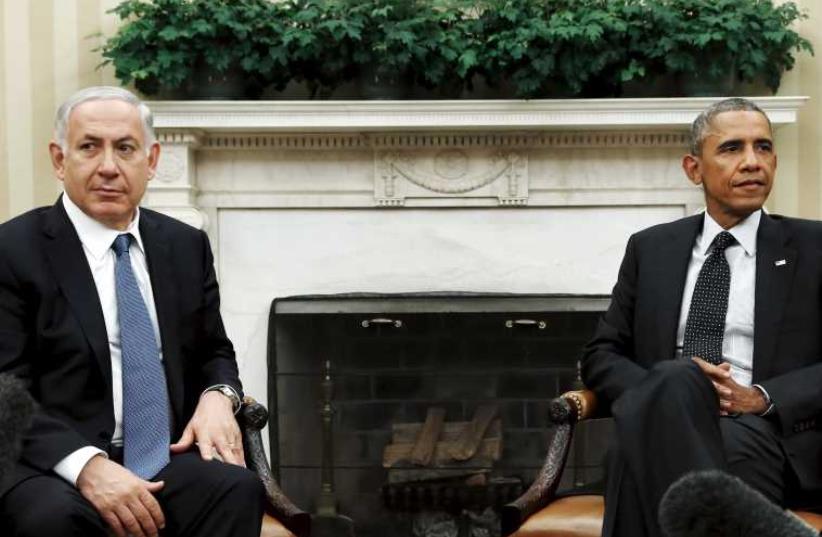 US President Barack Obama (R) meets with Prime Minister Benjamin Netanyahu at the White House October 1, 2014
(photo credit: REUTERS)
Advertisement
Now that the Iran nuclear deal has been passed by Congress, Washington and Jerusalem appear intent on publicly patching up ties, with Prime Minister Benjamin Netanyahu scheduled to meet with US Secretary of State John Kerry at the end of the month, and US President Barack Obama in early November.Both Obama and Kerry refused to meet with Netanyahu in March, when he went to Congress to argue against the Iran deal.White House spokesman Josh Earnest announced the scheduled Obama-Netanyahu meeting on Friday, saying “the president has indicated on a number of occasions his desire to begin consultations with our Israeli allies about how to further deepen that cooperation.”Israeli government officials said the meeting with Kerry, with whom Netanyahu spoke by phone last weekend, is scheduled to take place on the sidelines of the UN General Assembly at the end of September.The meeting with Obama – the first in over a year – is expected to take place when Netanyahu travels to Washington to address the annual meeting of the Jewish Federations of North America scheduled for November 8-10.Signs of the administration’s efforts to begin patching up relations with Jerusalem became evident on Wednesday when Vice President Joe Biden held a Rosh Hashana reception at his residence. Among those in attendance were Israel’s Ambassador Ron Dermer, a very public critic of the deal, who was photographed hugging Biden.“Twenty percent of Israel’s defense budget is paid for by the American taxpayer,” Biden said at that reception, adding that this expenditure would continue, and even grow.“We are fully prepared to sit down with the Israeli defense leadership with a menu and say, ‘What do you need?’ We are prepared to do a 10-year MOU [memorandum of understanding] for Israel’s defense.”Netanyahu refused to talk to the US about what Israel would need for its security in light of the Iranian deal while the debate about the deal was still raging in Congress, but that issue is now expected to be a focus of his talk with Obama and Kerry.Israel is concerned that Iran – flush with billions of dollars in freed assets and sanctions relief – will have more money to fund proxies like Hezbollah, Islamic Jihad, and Hamas that will then pose enhanced security challenges for Israel.At a speech to British parliamentarians on Thursday, Netanyahu said that Hamas could not last “two days” without Iranian support. Following that speech, Netanyahu went to the British Library and viewed the original Balfour Declaration of 1917 that declared British support for a Jewish national home in Palestine.Meanwhile, Netanyahu’s meeting with Kerry on the sidelines of the UN meeting will take place after a Palestinian flag is hoisted at the world body for the first time, following Thursday night’s passing of a resolution in the General Assembly.The measure passed by a final vote tally of 119 to 8, with 45 abstentions.A total of 19 fewer states voted for this measure than for accepting “Palestine” in 2012 as a non-member observer state. That measure passed by a vote of 138-9, with 41 abstentions.In addition to Israel, the US, Canada, Australia, and the four small South Pacific island-states of Micronesia, Palau, Tuvalu and the Marshall Islands voted against the measure.The Palestinians have an automatic majority - comprised of the Islamic and non-aligned states - in the UN General Assembly. This means that any resolution it brings to that body is almost certain of passing.This led Israel’s outgoing ambassador to the UN, Ron Prosor, to say in his speech to the body on Thursday that the Palestinians could bring a resolution declaring that the world is flat, and the UN would pass it.Prosor also sarcastically noted in his speech that the EU would probably try to reach a consensus to abstain on such a resolution, though “some EU countries would consider it a matter of principle to declare that the world is, indeed, flat – if this is how the Palestinians see it.”And, indeed, 10 EU countries broke with the majority of EU countries that abstained, and instead voted for the measure. Most notable among those countries was Poland, which abstained in the 2012 vote on non-member observer state status, and which has traditionally abstained on these types of votes. Slovenia was another country that voted against Israel on Thursday, but which abstained in 2012.Austria, by contrast, abstained on the flag vote, though it voted for the Palestinians in 2012, as did Cyprus, Denmark, Finland, Greece and Portugal.Norway and Switzerland were among the non-EU European states which abstained this time, though they voted for the Palestinians in 2012.In addition to Poland and Slovenia, the other EU countries that voted for the measure were France, Italy, Spain, Sweden, Belgium, Ireland, Luxembourg and Malta.India, meanwhile, which broke with its traditional pattern of voting against Israel in the UN when it abstained on two measures over the summer, returned to its old ways and voted for the flag measure. Both Myanmar and Thailand, however, were other Asian states that went from voting for the Palestinians in 2012 to abstaining on Thursday.