Ex-Defense Minister Ya'alon also accuses Israel's leadership of engaging in "petty politics" and being interested purely in its own political survival. 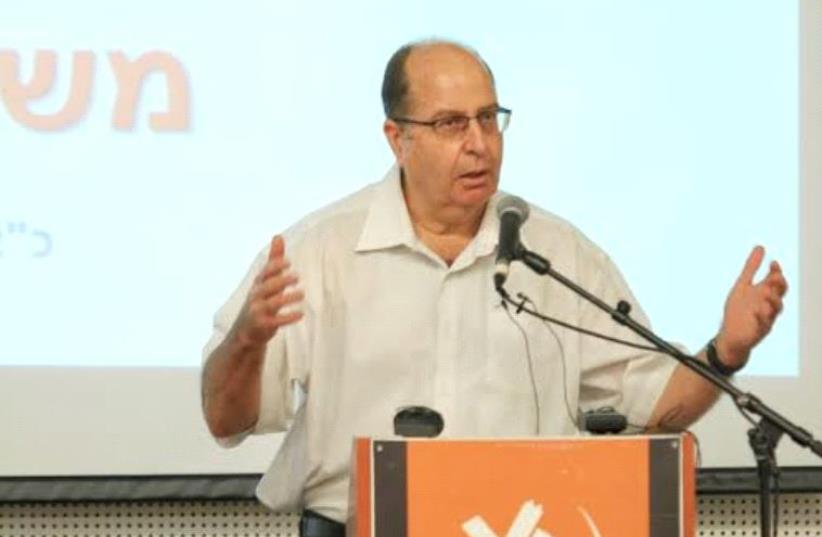 Moshe Ya'alon speaking at the Bar-Ilan forum
(photo credit: ITAI SCHREMER)
Advertisement
Should Israel give up its freedom to operate in Judea and Samaria, the Palestinian Authority “won’t survive, and the Jordanian kingdom will fall too,” former defense minister Moshe Ya’alon said Wednesday at Bar-Ilan University.Ya’alon added that “there are those on the right” who would settle for an Israeli military presence, but no Israeli sovereignty on the Jordan Valley, describing the position as dangerous.Ya’alon delivered a speech filled with stinging criticism of the government, saying that ordinary people and young people feel ashamed when they see how the country’s leaders conduct themselves, and that criminal investigations into wrongdoing occur frequently.“If there is no confidence in the leadership, there is no leadership,” Ya’alon said.The former defense minister, who was unceremoniously dismissed from his post by Prime Minister Benjamin Netanyahu in May and replaced with Avigdor Liberman, said that above all, “corruption” is what kept him up at nights.“When the leadership is busy with petty politics, in quarrels and factionalism, [they target] at times the Arabs, the settlers, left-wingers, haredi people, or gays and lesbians, and now, Ashkenazi and Sephardi people,” Ya’alon stated. “Where does this come from? They delegitimize senior members of the defense establishment and the IDF, and attack them as left-wingers, because they safeguard the rule of law.”He defined leadership as “the ability to take decisions not out of political survival – online extreme comments, the media, or one community or another should not budge you from your path.”Ya’alon added that the Negev and the Galilee regions have “turned into the Wild West,” where there is no law enforcement. He added that plans to settle the Beduin in the South have been delayed, and that Jerusalem’s Arab neighborhoods have become “extra-territorial zones.”He also did not spare the Palestinian leadership from criticism, saying it has refused to recognize the Jewish nation-state at any stage, and that there is no Palestinian leadership today prepared to offer that recognition in “any borders.”Both Hamas and the PLO seek a Palestinian entity “from the river to the sea,” he said. “When the Palestinians say occupation, they mean from 1948, not 1967. He warned against “deluding ourselves, and saying that another agreement or withdrawal will improve our security-diplomatic situation.”Ya’alon offered veiled criticism of his successor Liberman when he said that responding to terrorism through arrogant, irresponsible comments that lack a sober, rational vision was wrong. Israel’s security policy “cannot be conducted through words of arrogance or ultimatums that cannot be backed up.”The Likud responded by mocking Ya’alon’s comments, saying that this is the same man who previously warned of a nuclear-armed Iran within a matter of months, and when he lost the defense portfolio said there is no existential worry for Israel.Ya’alon would be willing to say anything today to remind people that he exists, the Likud said. “We would not be surprised if ‘Bogie’ tells people that Netanyahu accepted the Uganda Scheme (the early 1900s plan to partition part of British East Africa for a Jewish homeland), and that thanks to him the Jewish state did not end up in Africa,” the Likud party stated.