Yacimovich criticizes Herzog for abandoning diplomacy with the Palestinians

Herzog said in France on Saturday that a Palestinian state could not be created now. 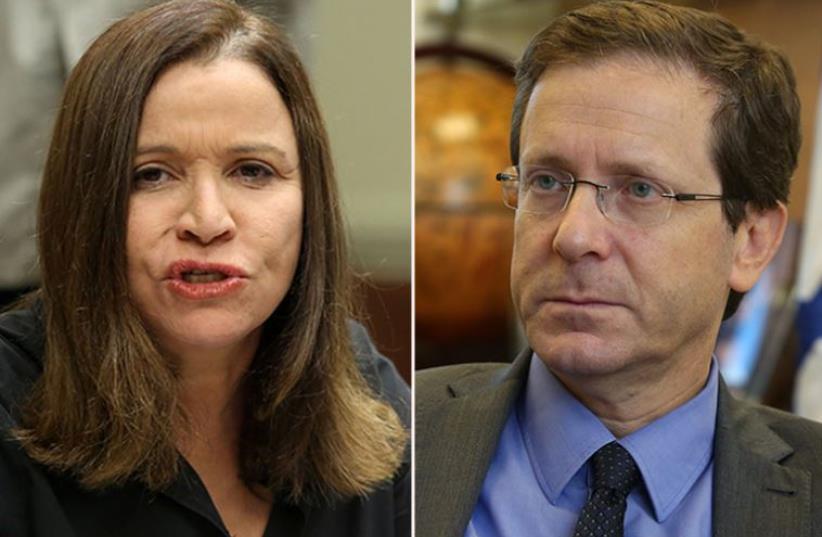 Yacimovich and Herzog
(photo credit: MARC ISRAEL SELLEM)
Advertisement
MK Shelly Yacimovich (Zionist Union) criticized her party leader Isaac Herzog on Sunday after he presented a plan in Paris on Saturday that would see Israel separate from the Palestinians.    Herzog met on Friday at the Elysée Palace with French President François Hollande and Foreign Minister Laurent Fabius and presented his new diplomatic plan of separation from Palestinian villages surrounding Jerusalem and told the leaders that “attempts to reach a Palestinian state now are unrealistic." "A Palestinian state cannot be established currently because the Palestinians have no leadership that controls the whole territory and that could lead such a move," Herzog said. Herzog added that, "First we must separate between Israelis and Palestinians, this is what all efforts must be focusing on; a separation that will be accompanied by security and economic measures, in a way that will bring about calm on the ground."  Yacimovich told Israel Radio on Sunday that she heard about Herzog's plan through the media and said it would have to be discussed within the faction, especially if it contravenes the position of a majority of members. "Opposite a coalition that is pulled by its hair by Smotrich (Bayit Yehudi MK Bezalel Smotrich) and Hazan (Likud MK Oren Hazan), the Labor party must present a diplomatic alternative of discussion and not give up on it in the face of the common argument on the Right that there is no one to talk to," Yacimovich said.   Yacimovich said that now, precisely during the wave of terror that Israel is facing, a brave diplomatic initiative must be put forward to renew negotiations with Palestinian Authority President Mahmoud Abbas.  "Abu Mazen (Abbas) is indeed not a lover of Zion, but it may be that he represents the last opportunity to speak to a secular and pragmatic Palestinian leader and this opportunity must not be missed, which would be playing into the hands of Prime Minister Benjamin Netanyahu. In the interview, Yacimovich also expressed support for Defense Minister Moshe Ya'alon for ordering the evacuation of settlers on Friday who a day before had moved into two Palestinian buildings in the West Bank city of Hebron.    Rina Bassist contributed to this report.