The women's branch within the party's Anglo division is another step in the Yesh Atid party's extensive effort to reach out to potential new voters and supporters. 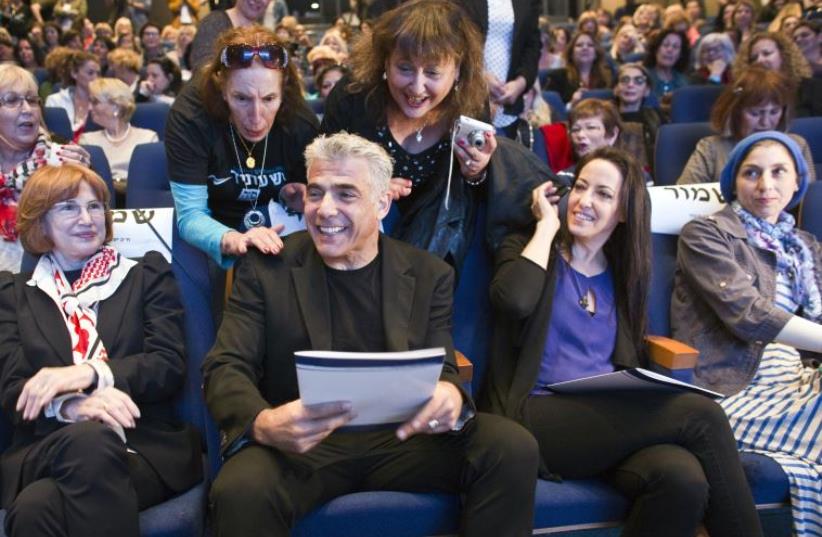 Yesh Atid leader Yair Lapid and his wife Lihi attend a women's committee convention in Tel Aviv
(photo credit: NIR ELIAS / REUTERS)
Advertisement
Yair Lapid’s Yesh Atid has become the first Israeli party to form an Anglo women’s division as another step in its extensive effort to reach out to potential new voters and supporters.Lapid’s wife, Lihi, inaugurated the Anglo women’s division at an event in Tel Aviv Sunday night, together with MK Aliza Lavie, a former head of the Knesset Committee for advancing the status of women. Nearly 40 women who support Yesh Atid attended.Lavie spoke about women, their place in Israeli society and what Yesh Atid is trying to do to improve the situation. Lihi Lapid then gave a very personal talk about what shaped her and her ideas as a woman, a mother, and wife.“Yesh Atid places great emphasis on women’s issues and female representation,” said Lavie. “Therefore, a women’s group within the English-speaking division is important, and I was happy to see how we have empowered these women to step up and get involved. Together we will move Israel forward.”Former Yesh Atid MK Dov Lipman, who was born in the US, said the women’s group would add a lot to the party’s already active English-speaking division “Lihi Lapid is a remarkable woman who adds so much to Yesh Atid,” he said. “The women at this inaugural event were inspired by her words and amazed by her character.”Michal Slawny Cababia, who directs the Anglo division, said it was exciting to see so many women at the event.“There was great energy in the room, and MK Lavie and Lihi Lapid spoke with passion about issues that are important to women,” she said.“We look forward to putting together more events and growing the English-speaking branch,” she added.