The faction has a clear diplomatic plan that was written by MK Nachman Shai and unveiled at a March 8 press conference by Zionist Union leaders Isaac Herzog and Tzipi Livni. 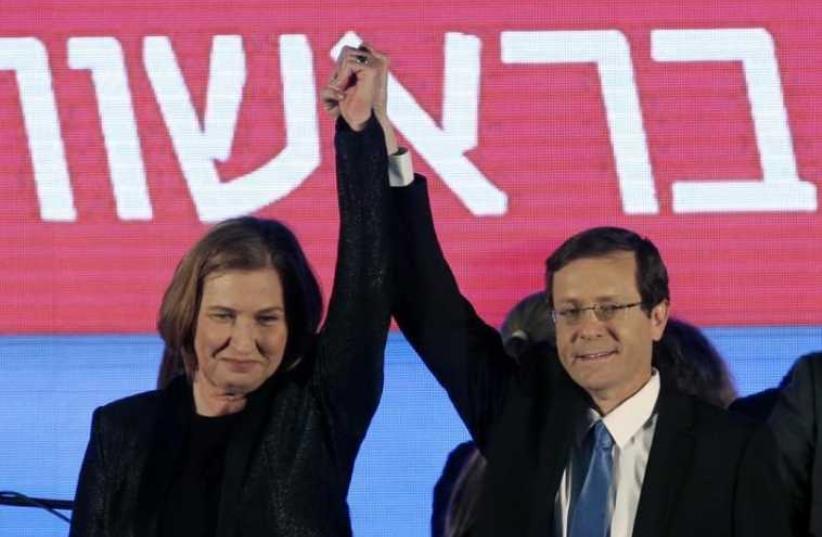 Isaac Herzog (R) and Tzipi Livni, co-leaders of Zionist Union, raise their arms at party headquarters in Tel Aviv
(photo credit: REUTERS)
Advertisement
The Zionist Union faction will convene in a special session Tuesday evening to discuss whether it should adopt a new diplomatic plan following clashes among its MKs.The faction has a clear diplomatic plan that was written by MK Nachman Shai and unveiled at a March 8 press conference by Zionist Union leaders Isaac Herzog and Tzipi Livni and widely distributed in Hebrew and English.The plan says their first choice would be to renew bilateral negotiations with the Palestinians but that regional international approaches would be attempted if the Palestinians are not interested in bilateral talks. Unilateral approaches were ruled out.Since then, however, Labor MK Hilik Bar devised his own plan, announced it with Herzog by his side, and sold it around the world. He had hoped the Zionist Union as a whole would adopt his plan.MK Amir Peretz unveiled a plan that calls for annexing five percent of the West Bank and giving the Palestinians the remaining 95%, as well as 1% of the land that was part of Israel between 1948 and 1967.He said the plan would enable some 490,000 Jews who live over the pre-1967 border to live in sovereign Israel.MK Omer Bar-Lev called a press conference at the Knesset Monday to outline his new plan, which he purposely wanted published the day after the November 29 anniversary of the passage of the United Nations partition plan in 1947.His proposal calls for immediately stopping construction outside the settlement blocs; approving funding for transferring settlers from isolated settlements to the blocs; expanding Area B, which is under Palestinian civil control; and demilitarizing Gaza in return for developing the Strip.“There will be a binational state if we do not take immediate action,” Bar-Lev said. “We need to take our fate in our hands and take steps to determine our own destiny. We can’t leave our future in the hands of the Palestinians.”Bar-Lev presented his plan to US Secretary of State John Kerry last week and vowed to publish it in English next week.He said he would not yet delineate where he believes the final border in Judea and Samaria should be.When asked by a reporter from Haaretz, why the plan makes no mention of peace with the Palestinians, Bar-Lev said “Peace is not a bad word, but the chances of reaching an end to the conflict in a year-and-a-half are very low.”