“The survey results are a source of pride and a badge of honor for the Israeli public during Pride Month," said Hiddush director Rabbi Uri Regev 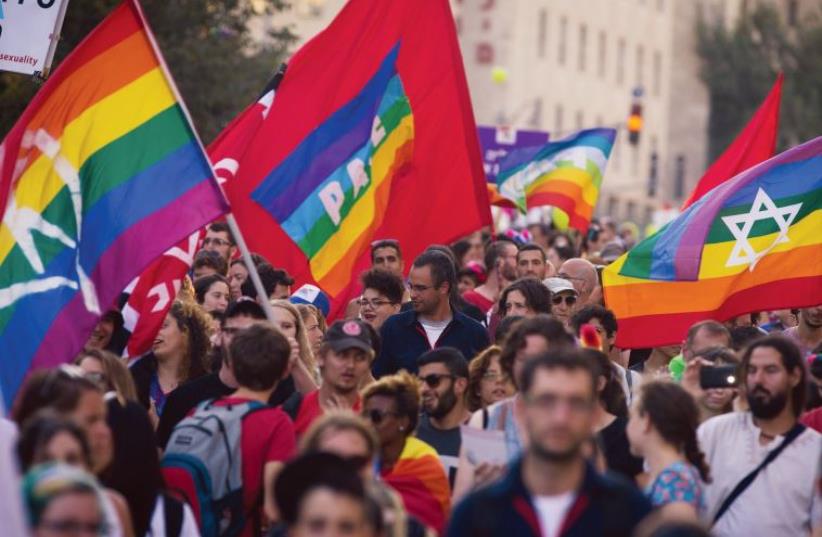 LGBT supporters flood the capital’s streets and wave custom pride flags, after the murder of Shira Banki at the city’s pride parade last July
(photo credit: MARC ISRAEL SELLEM)
Advertisement
A poll conducted ahead of Friday’s Tel Aviv Gay Pride Parade shows a high level of public support for establishing legal marriage or registration for same sex couples in Israel.According to the poll conducted by the Smith Polling Institute for the Hiddush pluralism group, 76 percent of the Jewish Israeli public support the establishment of some form of marriage for gay couples.This represents a significant jump in support since Hiddush’s last poll in September last year, which found that 64% of the Jewish public was in favor of same sex marriage.Notably, the new survey showed that 16% of haredi respondents said that gay partners should be given the option of registering as a couple, while 31% of haredim polled said that such partnerships should be given the same rights as heterosexual couples, although 58% said homosexual partners should not be able to marry or register in any way.Among the general Jewish public however, strong support was shown for the rights of gay couples, with 75% of those polled saying samesex partnerships should be afforded all the rights given to heterosexual couples, while 5% said “most” of these rights should be given to gay couples.Forty-six percent of the national-religious respondents said that gay couples should be allowed to marry or register as partners, with 54% opposed, while 70% said that homosexual couples should have all or nearly all the rights of straight married couples.The remaining 20% said, however, that gay couples should get much fewer or none of the rights given to straight partnerships.The survey was conducted by the Smith Polling Institute for Hiddush on May 24-25 and polled a sample of 500 people by telephone.“The survey results are a source of pride and a badge of honor for the Israeli public during Pride Month, but the political and legal reality in Israel is shameful,” said Hiddush director Rabbi Uri Regev.“The data prove that the establishment of legal marriage for same-sex couples and religious freedom in general have practically become the public consensus of the Israeli Jewish population.The public’s will has never been translated into legislation because all successive Israeli governments, from both the Left and the Right, have instead traded away the public’s freedom of marriage and divorce to the Orthodox parties in exchange for their political support.”