Nearly half of Israelis think that Prime Minister Benjamin Netanyahu is corrupt,yet many think he’s most suited to be PM. 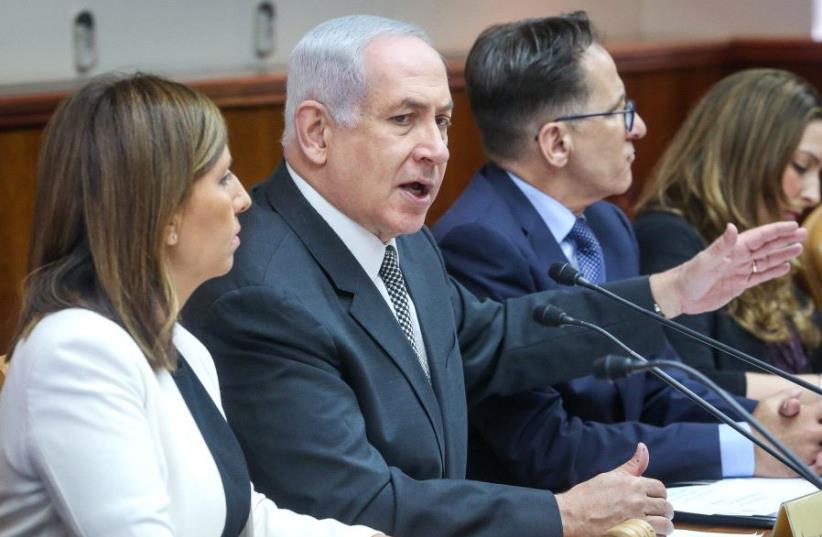 Benjamin Netanyahu
(photo credit: MARC ISRAEL SELLEM)
Advertisement
Nearly half of Israelis think that Prime Minister Benjamin Netanyahu is corrupt, but he is still the candidate found to be most suited to be prime minister, a poll by Panels Politics for The Jerusalem Post’s sister newspaper Ma’ariv found Thursday. According to the poll, 48% of Israelis think that Netanyahu is corrupt, while 38% say he is not, and the rest do not know. More than half of the people polled (55%) said they do not believe that Netanyahu knew nothing of alleged corruption in connection to the government’s purchase of submarines from Germany, while 30% believe him and another 15% don’t know. Likud voters had markedly different answers, with 69% believing that Netanyahu did not know about the corruption allegations and 80% saying that he is not corrupt. Despite the public’s doubts, Netanyahu was the most popular answer to the question of who is most suited to be prime minister, with 26% of the vote, followed by none of the above (19%), Yesh Atid chairman Yair Lapid (14%,) newly-elected Labor leader Avi Gabbay (12%), Education Minister Naftali Bennett and Finance Minister Moshe Kahlon tied at 8%, and Defense Minister Avigdor Liberman (3%). If an election were held this week, the Likud would remain the largest faction, with 24 seats, followed by Yesh Atid with 22 seats, Zionist Union with 19, Bayit Yehudi with 13, the Joint List with 11, Kulanu with 9, United Torah Judaism with 7, and Shas, Yisrael Beytenu and Meretz with 5 each.If Netanyahu has to resign, over half (53%) of Israelis would prefer to go to an election; only a third (33%) would want a Likud-led government to live out its full term with a different minister at the helm. Right-wing voters were less likely to want a new election (38%), whereas over three-fourths of left-wing voters (77%) would want an election. Nearly nearly half (47%) of Israelis think that the government’s agreement that Germany sell submarines to Egypt harms national security, while 23% disagree with the statement, and the rest (30%) didn’t know. Of those who think the submarine deal harms national security, half (49%) said it would influence the way they voted in the next election, 39% said it would not, and the remaining 12% didn’t know – meaning that 23% of those polled say their vote would be influenced by the matter. The poll was taken on Wednesday, July 19, through an online panel of 555 Israelis over age 18, and its margin of error is 4.3%.