Poll: Most Israelis think the world is against them

More Israelis think Russian President Vladimir Putin has a bigger influence on events in the Middle East than US President Donald Trump.

By LAHAV HARKOV
NOVEMBER 1, 2017 07:09
A supporter wears a T-shirt reading 'Boycott Israel'
(photo credit: AFP/ MOHD RASFAN)
Advertisement
More than half of Israelis (59%) think that international criticism of them stems from a basic hostility toward Israel, a poll commissioned by Mitvim: The Israeli Institute for Regional Foreign Policy and Friedrich-Ebert Stiftung, and provided exclusively to The Jerusalem Post on Tuesday has found.The poll, conducted by Smith Research in advance of Mitvim’s first annual conference on Wednesday, indicates that only a third of Israelis (34%) think that international criticism is based on disagreements about Israel’s policies. 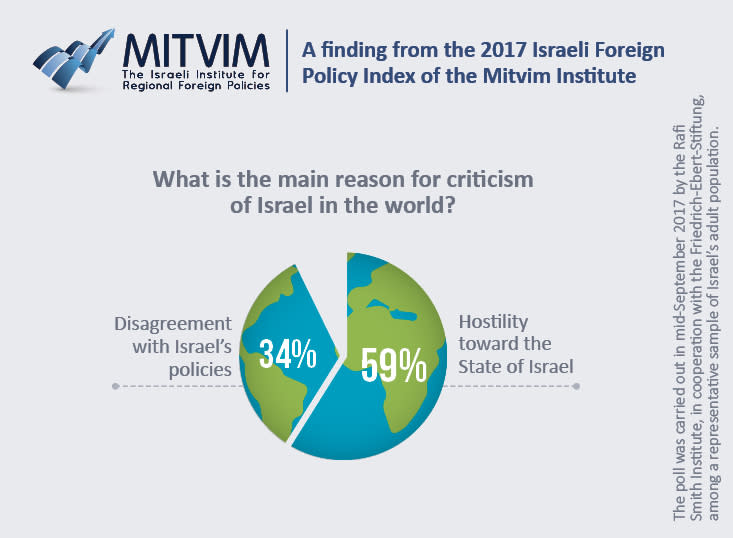 About half of Israelis (52%) think the world powers’ nuclear deal with Iran did not change the level of threat Tehran poses to Israel, while 28% think it increased the threat, and only 10% think it decreased it.In addition, more Israelis (52%) think Russian President Vladimir Putin has a bigger influence on events in the Middle East than US President Donald Trump, while only 15% think that Trump has more influence and 21% feel that their influence is the same. 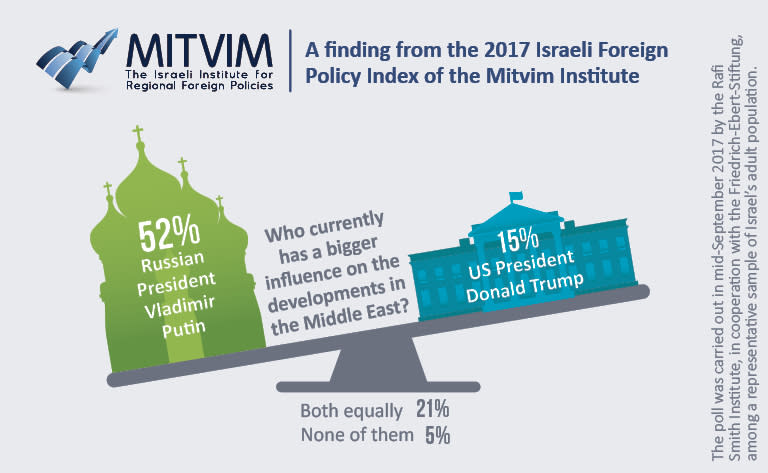 Israelis rate the US-Israel relationship at an average 6.88 out of 10, with 41% of them rating it as “good,” giving it a score of eight and up. The countries most important to Israel after the US, in descending order, are Russia, Germany, the United Kingdom, China, France and Egypt. The public is split about evenly as to whether a weaker European Union (37%) or a stronger one (38%) is better for Israel.The vast majority of Israelis (70%) think that regional cooperation between Israel and other Middle Eastern countries is possible, while 23% think it is not. Such cooperation would benefit Israel most in the areas of security and economics, they believe.Nearly half (48%) think regional cooperation can be achieved without progress in the peace process with the Palestinians, while 39% think progress with the Palestinians is necessary. However, normalization with the Arab world is the single incentive Israelis view as most conducive to peace with the Palestinians (29%), followed about equally by security guarantees and weapons from the US (15%) and upgraded ties with the EU (14%). A package of all of the above was the choice of 57% of respondents.Most Israelis (59%) said Arab citizens of Israel should play a greater role in advancing peace with the Palestinians, while 26% disagreed.On a scale of 1 to 10, with 10 being the best score, Israelis rate the government’s handling of foreign policy at a mediocre 5.05. Only 19% rated it eight or higher. The public is even less satisfied with the Foreign Ministry, giving it a 4.81 average score, with only 13% giving it a “good” rating.Israelis think their country’s foreign policy priorities should be to improve relations with Arab states (35%), advance the peace process with the Palestinians (31%), fight the Boycott, Divestment and Sanctions movement (24%) and counter the Iranian threat (20%).Respondents were allowed to give two answers.Prime Minister Benjamin Netanyahu currently holds the foreign affairs portfolio, but only 6% of respondents want him in that role. The preferred choice for full-time foreign minister is Yesh Atid chairman Yair Lapid (13%) followed by Zionist Union MK and former foreign minister Tzipi Livni (6%).Asked whether Israel should take Diaspora Jews into account when formulating policy, 50% said yes, while 39% said no.The poll was conducted in September among a representative sample of Israel’s adult population – 600 Jewish and Arab men and women – and has a margin of error of +/- 4%.