President Rivlin: Even in difficult times, Israelis continue to celebrate

Rivlin and his wife greet visitors as they open their succa to the public. 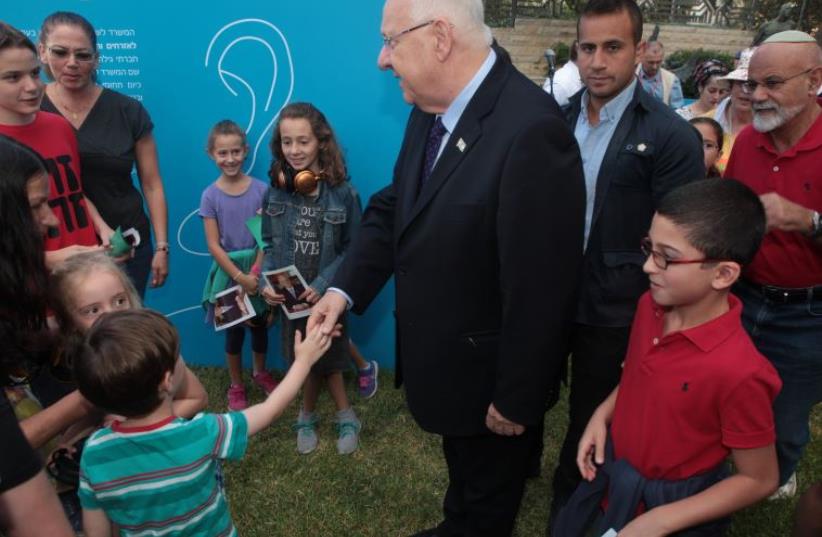 President Reuven Rivlin greets children at his home in Jerusalem on Succot
(photo credit: SHMULIK SOLOMON/GPO)
Advertisement
It may have been competition from the Priestly Blessing event, reluctance to stand in line, or the knowledge that President Reuven Rivlin would participate later in the day in the Hakhel ceremony at the Western Wall, but fewer people visited the President’s succa than in previous years.In the past, queues formed outside the President’s Residence more than an hour before the doors opened.But on Wednesday morning, despite radio announcements throughout the day on Tuesday, there were no queues, though it was obvious from the signs in the street that huge crowds were anticipated.The first trickle of visitors entered the grounds at around 9 a.m., even though the starting time was advertised as 8.30. The crowd swelled slightly but was never so large as to hamper easy movement from one display to another.In previous years, the crowd was so dense that just walking through the succa was an ordeal; finding a seat in the garden was almost impossible after the first 20 minutes. But this year there was plenty of room and only a few chairs were provided for senior citizens and people with disabilities.The lawn was dotted with brightly colored bean bags and pillows for people to sit on, but mainly children made use of them.Before entering the compound, visitors received a leaflet explaining that by law the president’s role is primarily symbolic, his authority extending only to making ceremonial appointments and signing documents, yet the President’s Residence is a place of dialogue, partnership and compromise – a place that seeks commonality, and strives to give everyone a sense of belonging. While the president cannot settle disputes, it is incumbent upon him to do everything possible to enable the citizens of the state to coexist despite their differences.This was the central theme of the open house, which was organized in conjunction with the ministries of Social Equality and Agriculture.Social Equality Minister Gila Gamliel, despite being a mother of young children, showed up early in the morning for a photo opportunity with Rivlin, telling the media about her ministry’s policy of inclusiveness for all sectors of the population regardless of race, religion, age or gender.“We want to extricate ourselves from preconceived stereotyped notions and give optimism and hope to all,” she said.Her ministry was responsible for a listening station, where visitors donned ear phones to hear what people from different sectors of the population were doing and their relationship to the ministry. There were photographs of the people who had been recorded.Rivlin and Gamliel went from portrait to portrait to listen to the stories. For instance Rina, a doting grandmother, wanted greater contact with her grandchildren, so the ministry arranged for her and other senior citizens to go to the school across the road from her home to learn about emailing and Facebook. Now she communicates with her grandchildren all the time.Rivlin and Gamliel spent the most time at video screenings in the main reception hall and in the garden, where Rivlin, both on screen and off, spoke of Israel’s changing social image from majority versus minority to a cooperative demographic mosaic impacting on politics, economics, education, communications, security and the future of he nation.Decorated by the Ministry of Agriculture, the succa contained examples of Israeli produce – displays of citrus fruits and varieties of pumpkin and squash. A lulav and etrog were conveniently placed on a table for those wanting to recite the appropriate blessing.Agriculture Minister Uri Ariel, who accompanied Rivlin later in the morning, said that the produce in the succa symbolized the abilities of Israel’s farmers. In a sense, he said, Succot is their holiday.Rivlin said that sitting in the succa draws people closer together and gives them a better understanding of each other, even if they disagree.It is important to listen, he said, because through listening one learns.One of the most popular exhibits was a rubber stamp counter at which visitors could select a colored card and stamp it with images or slogans of their choice and sign it. The cards were subsequently displayed on the walls of the succa, with people eagerly photographing the cards that they signed.Another impressive exhibit was a series of vertical tributes to all the past presidents of Israel, from Chaim Weizmann to Shimon Peres.A bust of each president was accompanied by a placard with a biography of the president, a photograph of him with his wife and an international dignitary, plus a quote from one of his most notable speeches or published articles.Of Israel’s 10 presidents to date, only three were actually born in the country – but before it became a sovereign state.