Rivlin: Plight of Christians in Middle East a ‘stain on humanity’

“I say to you here, our Christian brothers of Jerusalem, our thoughts are with you at this difficult time,” said the president. 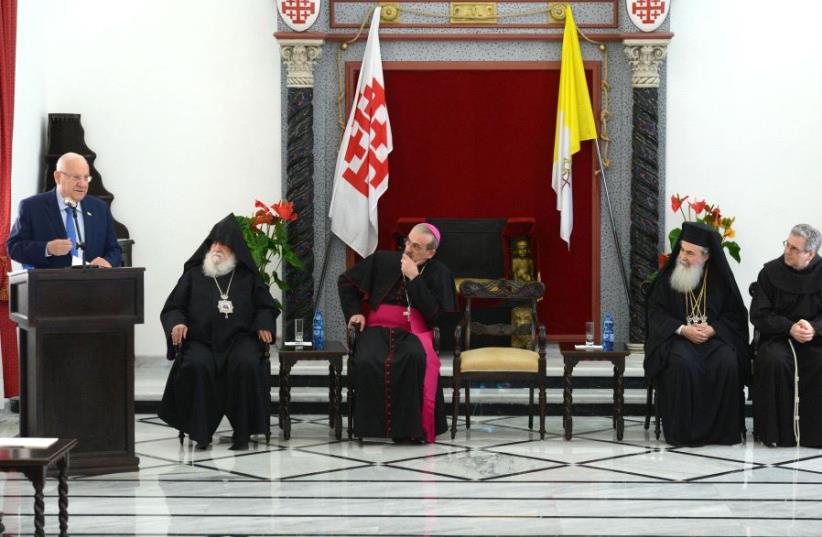 President Rivlin visits Latin Patriarchate in Jerusalem in honor of Easter
(photo credit: Mark Neiman/GPO)
Advertisement
President Reuven Rivlin described the plight of Christians in the Middle East as “a stain on humanity,” during a meeting with the head of the Latin Patriarchate in Jerusalem and the Greek Orthodox Patriarch on Wednesday morning in honor of Easter.The president noted the recent terrorist attacks against Coptic Christians in Egypt as well as the persecution of Syrian Christians by ISIS and other extremist Islamist groups, and said that Israel would continue to protect its Christian population.“I say to you here, our Christian brothers of Jerusalem, our thoughts are with you at this difficult time,” Rivlin said. “We have all seen the pictures from Syria; I visited some of the injured being treated in Israeli hospitals. What has happened there to the Christian community – and to the whole country – is a stain on all of humanity.”
Egypt"s Christians, forced to flee homes in north Sinai due to ISIS, receive aid at a church
Rivlin said that the Jewish people “know better than any what it means to pray in fear, and suffer from terrorism,” and promised that Israel would “protect your freedom of worship, your security and the security of your holy sites.”Archbishop Pierbattista Pizzaballa, who is currently serving as the apostolic administrator of the Latin Patriarchate, an interim position, thanked Rivlin for his expressions of support.He noted, however, that Israel too has suffered from anti-Christian attacks, such as the arson attack against the Church of the Multiplication of the Loaves and Fish in the Galilee, and mentioned Rivlin’s solidarity visit to the site.Pizzaballa said that Christians were a critical part of the country and of Jerusalem. They constitute “an integral part of the identity of the city, without which Jerusalem couldn’t be the same,” he said.Greek Orthodox Patriarch Theophilos III echoed this sentiment, calling Jerusalem a place that “embraces a multi-religious and multi-ethnic mosaic,” and said that the city could be an example of “harmonious coexistence and a synthesis of traditions and civilizations.”