One haredi school disinvited the president to speak after his support of the LGBTQ community. 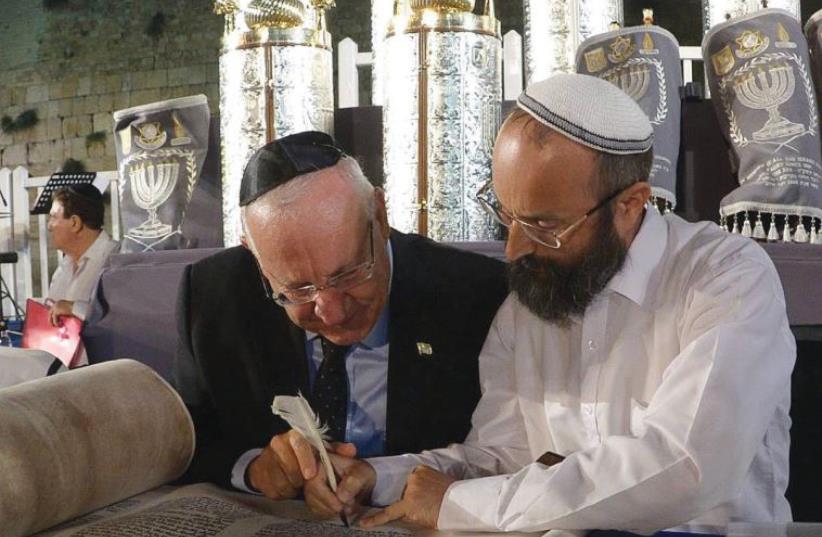 PRESIDENT REUVEN RIVLIN, with the assistance of a scribe, completes a ELIE ESTRIN (Courtesy Chabad) letter in one of the Torah scrolls dedicated at the Western Wall this week in memory of fallen soldiers.
(photo credit: Mark Neiman/GPO)
Advertisement
Though disinvited last week by a haredi (ultra-Orthodox) school in Jerusalem from participating in a class on unconditional love, on the grounds that he supports the LGBTQ community, President Reuven Rivlin is not being shunned by all haredi organizations and institutions.On Sunday, he will open the haredi school year at the Dibrot Moshe school in the capital’s Har Nof neighborhood, where he will be greeted by 300 students.Also attending will be Jerusalem Mayor Nir Barkat and Economy Minister Arye Deri, who lives in the neighborhood.Following widespread publicity about the withdrawal of the invitation, the President’s Office was contacted by numerous haredi organizations and institutions that said that even though they could not for halachic reasons condone homosexuality, they had nothing against the president or against homosexuals per se, and would be delighted to welcome the president whenever he cares to come.Some were actually very glad the previous invitation had been rescinded, because to them it meant Rivlin had free time to go somewhere else.Rivlin, whose Lithuanian ancestors were disciples and in some cases relatives of the Vilna Gaon, is well grounded in Jewish law and lore and feels perfectly at home in haredi circles.Many of his relatives are haredi. He is a cousin to United Torah Judaism MK Meir Porush, who is currently deputy education minister.