Donated by family of youth who drowned. 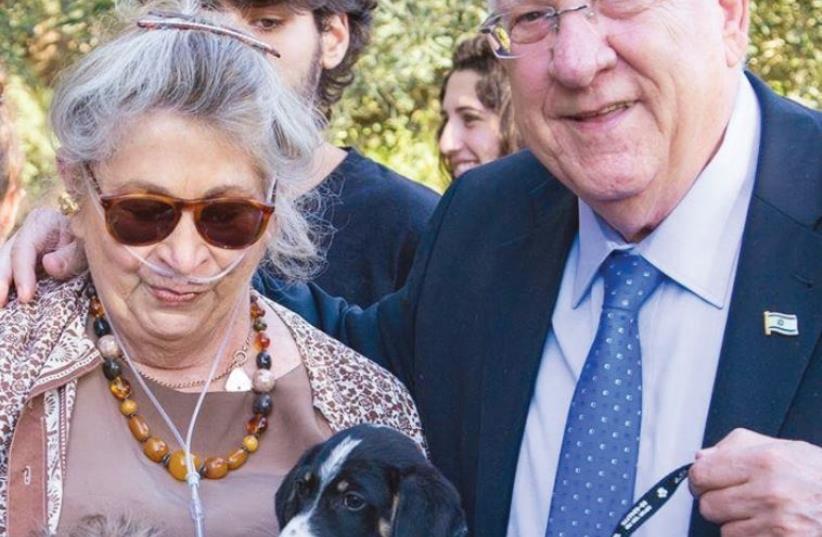 President Reuven Rivlin and his wife, Nechama, spend quality time with a puppy
(photo credit: YOAV BEN-DOV AND KHAI HELLER)
Advertisement
Nechama Rivlin, 73, the wife of President Reuven Rivlin, underwent a successful lung transplant at Beilinson Hospital in Petah Tikva on Monday. The operation, a highly complex procedure which took several hours, was performed by Professor Dan Aravot, Director of the Department of Cardiothoracic Surgery and Professor Mordechai Kramer, Director of Beilinson’s Institute of Pulmonary Medicine. Kramer is also Rivlin’s personal physician.Rivlin has been suffering from pulmonary fibrosis for several years, and has been waiting for a long time for a suitable donor to enable her to have a transplant.The tragedy is that with a lung transplant, unlike a kidney transplant, the organ must come from a deceased donor.Last week, 19-year-old Yair Yehezkel drowned in Eilat. He was taken to Joseftal Medical Center and then transferred to Soroka Hospital in Beersheba, but doctors were unable to save him. His family donated his organs in the hope of saving several other lives; Nechama Rivlin was one of the recipients.Rivlin is in stable condition, sedated and temporarily on a respirator until she is able to breathe unaided.When US President Donald Trump came to Jerusalem almost two years ago and visited the President’s Residence, one of the most moving photographs that gained traction around the world was of Melania Trump walking with Nechama Rivlin and holding her hand as Rivlin, with tubes descending from her nose, clutched her small oxygen tank to her side.Soon she will be able to breathe freely without having to depend on such an oxygen tank. And chances are high that she will be walking into the polling station under her own steam on April 9 to cast her vote for the Knesset.