JFN Prize Panel: From left, Sana Britavsky, Deputy CEO, Genesis Prize Foundation; Karen Tal, CEO Tovanot B’Hinuch (Educational Insights); Shira Ruderman, Director, Ruderman Family Foundation. (Natasha Kuperman)
(photo credit: NATASHA KUPERMAN)
Advertisement
"Jewish tradition teaches us to stand up for what is right,” actress, director and social activist Natalie Portman told a room of feminists earlier this month in Tel Aviv.Speaking via video at a symposium sponsored by Jewish Women’s Funding Network, the National Council of Jewish Women, and the Dafna Fund on International Women’s Day, the 2018 Genesis Prize laureate said she plans to use her prize platform and funds to “raise awareness about issues we all care passionately about.”Israeli-born Portman, an outspoken advocate of gender equality, was selected for the Genesis Prize in 2017 – before the #MeToo or Time’s Up movements gained international attention. But Sana Britavsky, Genesis Prize Foundation deputy CEO, said the spotlight on women’s issues in the #MeToo era will “give us an opportunity to achieve a great deal. Expectations are high. Much is expected of us – and much work needs to be done.”“Getting the work done” is the secret ingredient of the Genesis Prize. When the award was launched in 2013, Time magazine called the Genesis Prize the Jewish Nobel Prize. The laureates receive a $1 million award and are honored at a gala event in Jerusalem.However, as Britavsky explained, “it is after the ceremony that the work begins.”“We aim to engage the Jewish world on relevant social and humanitarian issues,” said Britavsky.“This prize is an action-oriented award; it allows the laureate to make a difference. The Foundation gives the laureate an opportunity to ‘re-gift’ the funds to a worthy cause of her choice; all our laureates to date chose to do so.”In other words, the Genesis Prize makes an impact in two ways. First, it honors a laureate – a figure who can inspire young Jews to become aware and connect with their roots. Then, it works with the laureate to make a difference in the Jewish world and beyond by supporting the laureates’ activist agenda and driving change.The prize has attracted additional donors eager to support the laureates and their causes. Over the past four years, laureate re-gifting has facilitated more than $10m. in additional grants. In December 2017, Israeli philanthropist Morris Kahn made a $1m. gift to honor Portman, doubling Portman’s award fund to $2m.Prizes have been around for a long time, but in the last decade there has been a surge in “prize philanthropy” – donors using awards to promote social change.At the Jewish Funders Network International Conference in Jerusalem on March 15, a panel of philanthropic leaders met to discuss the subject. Talia Horev, director of the Forum of Foundations in Israel and the moderator of the panel, framed the discussion by saying, “It’s exciting to see how prizes as a philanthropic tool are developing. From a traditional recognition prize, such as the Nobel Prize, they move to new innovative models that provide funding for new incentives aimed at driving social change.”The panel included Shira Ruderman, executive director of the Ruderman Family Foundation; Karen Tal, Israeli educator and recipient of Charles Bronfman Foundation Prize; and Britavsky. Other Genesis Prize executives, including Foundation president Steven Rakitt and senior adviser Jill Smith, traveled from the United States to partake in the conference and meet Israeli colleagues. 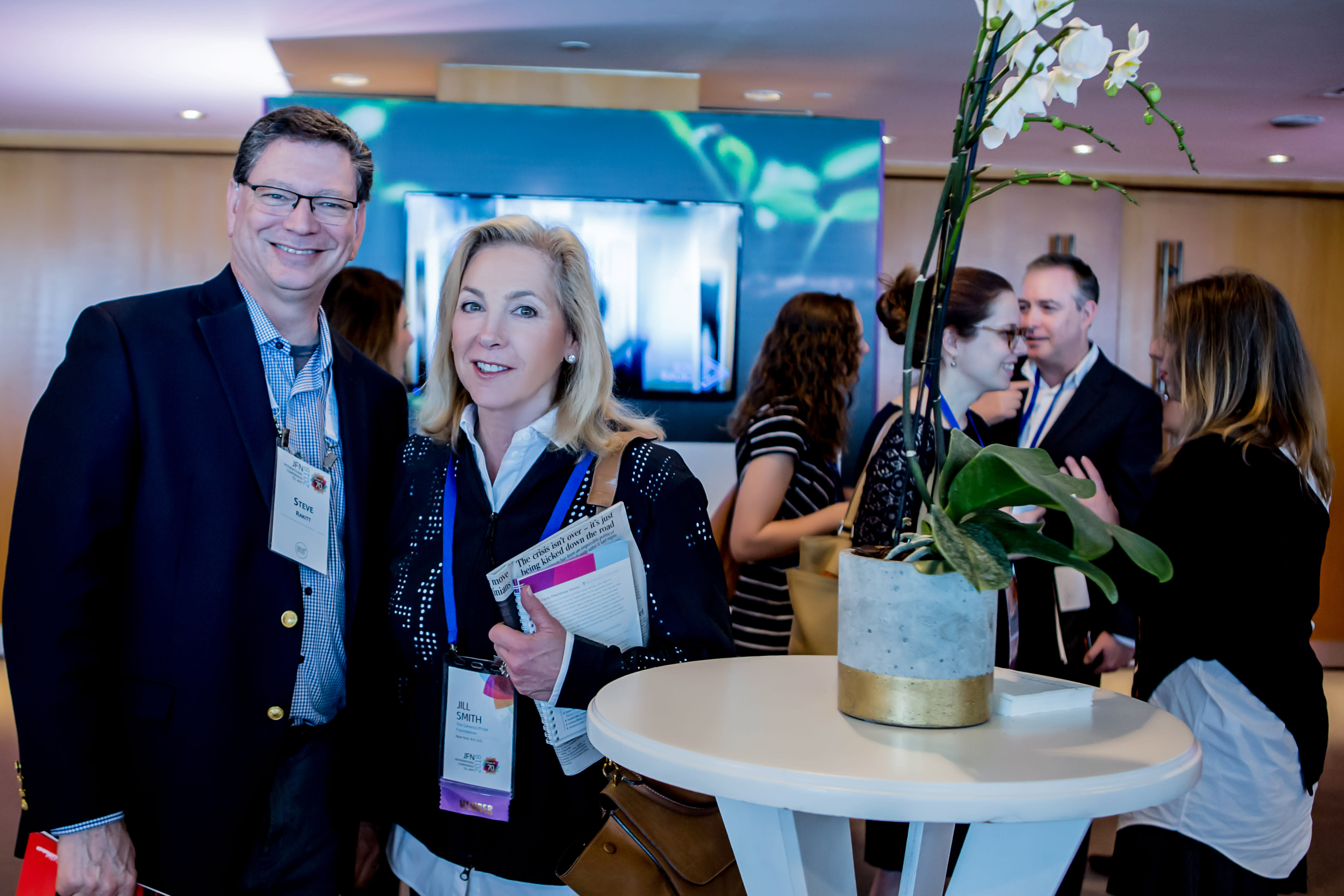 Steve Rakitt, president, Genesis Prize Foundation and Jill Smith, senior adviser to the chairman, Genesis Prize FoundationThe consensus: awarding prizes helps philanthropists set and drive their agenda.Tal is an example. In 2011, then a principal of the internationally recognized Bialik-Rogozin School in south Tel Aviv, Tal received the Charles Bronfman Foundation Prize. Today she is the co-founder of Education Insights (in Hebrew Tovanot B’Hinuch), a non-profit entity empowering dynamic public school principals in Israel’s social and geographic periphery to transform their schools and improve students’ prospects for success.Tal said receiving the Bronfman Prize infused in her a new sense of responsibility, commitment and confidence that enabled her to keep pursuing her goals. “Before I received the prize, I influenced 1,000 students and 200 volunteers,” Tal explained. “After getting the prize and starting Education Insights, I am working with 5,000 volunteers and 30,000 students in 28 schools.”According to Tal, the prize gave her the confidence to boldly spearhead an educational and social revolution in the periphery.“Start-up actors always feel uncomfortable and sometimes it is hard to keep going,” she said. “Receiving the prize gave me the energy to start again and again.”The Genesis Prize is not dissimilar, except that its recipients are not grassroots activists like Tal. Rather, they are successful Jewish influencers who are poised to make a public difference in the world. They can use their influence to advance the social causes.Through re-gifting, they can lend credibility to startups or philanthropic organizations seeking to effect change.