"We found out that there about 160,000 Google searches for the term ‘BDS’ [Boycott, Divestment, Sanctions] and about 8,500 more for the term ‘boycott Israel.’ It’s a crazy amount of searches." 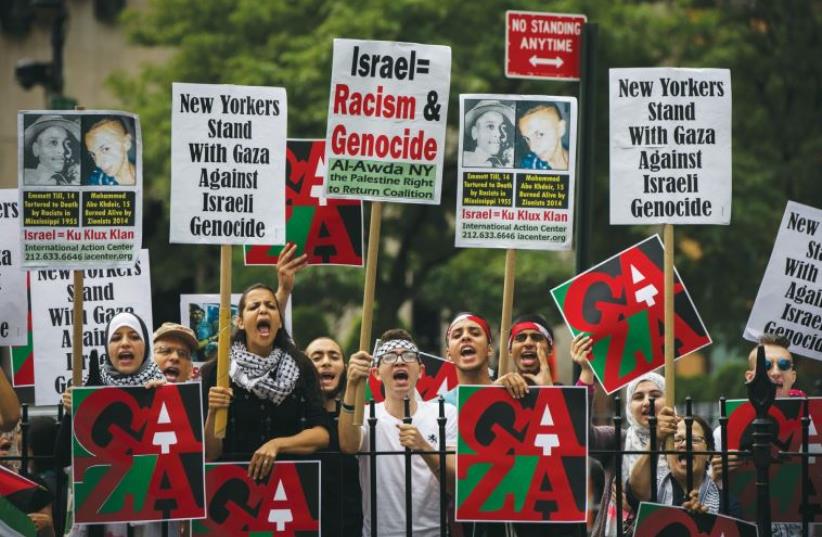 PRO-PALESTINIAN DEMONSTRATORS display signs outside New York’s City Hall in July 2014, near where a pro-Israel rally was taking place.
(photo credit: LUCAS JACKSON/REUTERS)
Advertisement
Dr. Tal Azran, head of the International Communication Program at the Interdisciplinary Center Herzliya, gave his master’s degree class on “State Branding” a patriotic assignment: Find some way to give Israel a good name around the world.Most students in the class came up with what one described as “the usual stuff hasbara (positive image-building) officials do in Israel: videos that show how beautiful the country is or how beautiful the girls are. ‘Start-Up Nation’ stuff.”But one pod of four students decided to take things in a different direction.Aviv Sarel, 31, herself a beautiful Israeli from Tel Aviv who is getting a degree in communications and new media, and three partners, one of whom is Sharon Hess, a Canadian in her 60s who immigrated to Israel more than 40 years ago and recently decided to go back to school, thought, “People aren’t really looking for ‘Beautiful Israel’ when they’re doing an online search.”Speaking with The Media Line, she said, “We found out that there about 160,000 Google searches for the term ‘BDS’ [Boycott, Divestment, Sanctions] and about 8,500 more for the term ‘boycott Israel.’ It’s a crazy amount of searches. Yet, when you type in ‘BDS’ there is zero pro-Israeli or even knowledgeable presence.”At Jerusalem’s Al-Quds University, students expressed a range of reactions to the notion of an online battleground.Speaking with The Media Line on a blisteringly hot day while she fasted during Ramadan, Asma Ra’ed, a literature student, said, “They can do what they want. I’m for boycott but I don’t think about it. The boycott will help Palestine, but calling yourself ‘boycott’ while being Israeli is a bit stupid.” She laughed out loud at the thought.Many students simply said they didn’t care, or as Ahmed, an engineering student who did not wish to identify himself fully, put it, “It’s not important to me. I’m living my life, I’m studying.”Iman Shweiki, who was on campus visiting a friend who studies computer science, and who said she wasn’t sure how she felt about the calls for a boycott, said, “Of course we should be talking about things. Nobody here talks to anyone outside of his neighborhood. Even Arabs aren’t talking. But you shouldn’t pretend you are for boycott if you are a Jew.”Over 150,000 Google searches are not to be pooh-poohed, but the Herzliya group can take some solace from the fact that the truly massive Google searches, such as “Justin Timberlake naked,” rake in millions.To complete their assignment, the group bought the URL “boycott-israel.net” which, remarkably, was available, and, in imitation of the famous Facebook relationship status, called its website, “It’s Complicated.”“No one was doing anything to address BDS or even look at the Israeli-Palestinian conflict,” Sarel explained. “Whereas the BDS activists, who smear Israel at every turn, well, at least they talk about the conflict and they address the things they want to change about the situation.“We saw an opportunity to talk about the situation from our point of view, to talk about those things that need changing, but from an Israeli perspective.“Our website, ‘It’s Complicated,’ shows in the most objective way that one party to a conflict can, those areas where Israel is right but also those where Israel is wrong. We address the reality of the situation we’re living in,” Sarel says.By using the “boycott-Israel” URL, the group hopes to draw unwitting Google searchers to join a boycott site or forum that is positioned somewhere between a neutral, informational site and one that gets Israel’s message out to the world.Using search engine optimization (SEO), Sarel says, “We hope they will think they are getting into a boycott site. Instead, they will be exposed to more balanced material and ‘new hasbara’ that doesn’t shy away from addressing the Israeli-Palestinian conflict or the boycotters or anything.We want to address it head-on.Our aim is to try to launch a dialogue about the issues that these people have on their minds and not just say, ‘We are great and beautiful and fabulous, come see Israel.’” Another member of the group, Hila Efrati, referred to the tactic of adopting a counter-intuitive URL as “guerrilla marketing.”“It was evident that if we went for a pro-Israeli line, we’d get a lot less traffic.”Other groups fighting boycott-Israel Internet prowess are also employing guerrilla tactics.Using a French moniker, a group that calls itself the “Brigade Juive” (Jewish Brigade) is sending mass emails to BDS activists warning them of a long fight.In a text combining broken English and imperfect French, the group writes: “We have a very particular set of skills, skills we acquired over a very long career. Skills that make us a nightmare for people like you.“In short, as you boycotters will have picked up, now we are going to scalp you one by one, collective by collective, association by association.”(Scalping in online jargon means to abuse a site.) “We have the time and the will."“A kiss from the Brigade,” the message ends.The Palestinian advocacy website Electronic Intifada claims the emails contain malware designed to harm the computer of any recipient who opens the mail.Without mentioning any malicious intent or the use of malware, Jewish Brigade claims to have mailed out a second batch of 8,000 such emails, “to our ‘friends’ the boycotters stuck at home. We’ll never let go.”“‘It’s Complicated’ is not aiming for the menacing so much as for the persuasive. We felt that the world has given up on peace or on any solution, and so many Israelis just end up thinking they have to be on the defensive, justifying Israel and responding to what they perceive as unfair attacks. We wanted to create a platform that addresses the conflict without flinching, and which exposes the complex reality that has created a long-term conflict between the two peoples. Israel is not perfect. There is a lot of injustice on both sides.”