No decision on whether terrorism was involved in 2017 incident in which Beduin man was shot and then drove into police officer while fleeing. 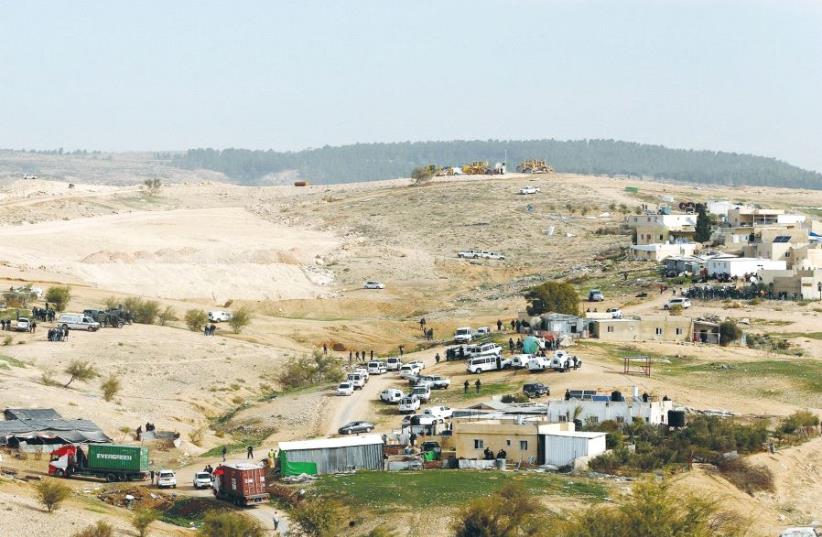 A VIEW of Umm Al-Hiran, the Beduin village in the southern Negev Desert demolished by police
(photo credit: REUTERS)
Advertisement
State Attorney Shai Nitzan decided to close the criminal probes of the January 2017 incident in which a policeman and a Beduin were killed surrounding protests of the state’s demolition of unrecognized Beduin residences in Umm al-Hiran in the South.Nitzan said on Tuesday that after reviewing additional evidence from the Shin Bet (Israel Security Agency), nei- ther he nor the agency could determine whether terrorist motives were involved on the part of the Beduin.He said that either way, the police involved in shooting Beduin Yacoub Abu al-Kaeean had not committed a crime. Regarding whether al-Kaeean had been innocent or not, Nitzan said that the police had reasonably felt in danger by the circumstances – even if what occurred was a tragic misunderstanding.Nitzan did direct the police, however, to further investigate whether the policemen involved in killing al-Kaeean should be disciplined, whether they had been properly prepared for the sensitivity of the situation, whether al-Kaeean’s medical care had been sufficient, and whether police should face consequences for having had contradictory accounts.In February, the Police Investigations Department filed a report regarding the case. Al-Kaeean was killed in disputed circumstances during the January 2017 demolitions and protests. Initially, the police and many politicians labeled al-Kaeean a terrorist after the car he was driving ran over and killed Border Policeman Erez Levi. But subsequently, the PID was called into probe for the possibility of police having illegally shot al-Kaeean, in which case the vehicle may only have run over Levi after al-Kaeean was shot and possibly already dead, but with the vehicle still in drive.The February annual PID report refers to the incident as a tragic one in which two families, Levi and al-Kaeean, both lost loved ones. Also, the report refers to al-Kaeean neutrally as “the deceased” – seeming to treat the Beduin man as innocent.The PID’s probe of the police for shooting al-Kaeean led to fierce tensions with the police even as its initial recommendations to the state prosecution were not to indict any policemen.Regarding the incident, the report said, “2017 was characterized by a complex struggle in the PID arena. This was manifested by the probe of Umm al-Hiran which began at the start of the year and which the PID was dealing with all year long.”Furthermore, the report narrates a sub-dispute which blew up publicly between the PID and the police when the PID reopened the probe to review a Shin Bet document regarding the incident.When the PID announced they would reopen the case to review the document, the police blasted the PID, implying they had tried to bury a document which showed additional terrorist sides to the dispute and which could have supported the police narrative of the incident being terrorism.No explanation has been given to date about how or why the Shin Bet document was not given to the PID or why the PID had not reviewed it, but the annual report said that the new document did not add any new radical facts to the case which it was not previously aware of.Likewise on Tuesday, though the police praised the prosecution’s decision, they again criticized the PID.“PID’s findings are similar to the preliminary inquiry that was conducted on the ground by the Israel Police,” a statement issued on Tuesday reads. “We are sorry that an intelligence-related investigation was stopped when the PID started its inquiry. Now, when it’s over, the Israel Police can complete its investigation into the case, so it can learn it thoroughly – as it should be after a complicated operation.”Udi Shaham contributed to this report.