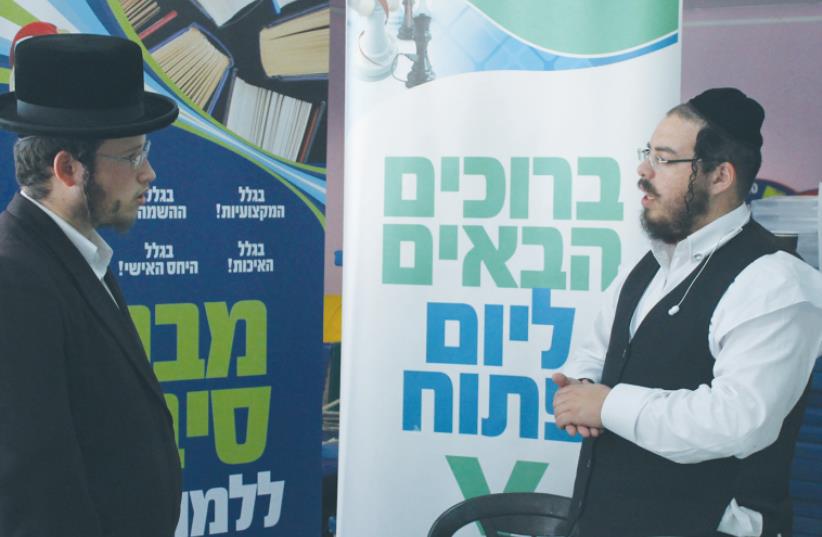 Man looks for work in Beit Shemesh
(photo credit: SAM SOKOL)
Advertisement
Dozens of ultra-Orthodox protesters clashed with police in Beit Shemesh on Wednesday during a protest against a municipality-sponsored job fair aimed at integrating members of the haredi (ultra-Orthodox) community into the economy, though it didn’t significantly deter turnout at the event.With cries of “gevalt” and carrying signs bemoaning the “destruction” of Judaism, the black clad protesters attempted to block the road outside of the community center where the event was taking place, screaming epithets at passing women and calling riot policemen, who held them back “murderers” and “Nazis.”Mounted policemen circled the screaming protesters, pushing them back as officers on foot tussled with stragglers. As two policemen pulled one of the protesters into the back of a police car, one of his compatriots rushed forward and was told by an officer to “act like a man and not a beast.”Beit Shemesh’s extreme haredi fringe had been working to stop the event for several days, putting up posters claiming that all of the city’s rabbis were united against it and even claiming that they had been successful in doing so.According to Shopping Mekomi, a local news outlet, while the city did not cave to pressure, several figures affiliated with the municipality withdrew their participation from the event as opposition mounted.“It is only permitted to work in a kosher way,” one of the demonstrators told The Jerusalem Post as he and several other stragglers were ejected from the area by police.The protester, who declined to give his name, said that the state wants to “uproot religion” and that anyone who goes to work in a secular office environment would eventually be transformed into a secular “gentleman” like the policeman pushing him down the street.Inside the center, however, the mood was very different, with haredim, both hassidic and “Lithuanian” mingling among corporate recruiters and tables offering job counseling, educational opportunities and help with resumes.One of the organizers of the event, who also declined to provide his name, said that he did not believe that some people may have been tricked into staying home because of the disinformation campaign, and that he did not think that one person was deterred from attending because of the violence.“Whoever has a family to support and wants to work will come,” he said. “The percentage of haredim working is rising and rising.”Several haredi men who spoke with the Post agreed, saying that the violence had been short lived and quickly quelled, with some even going to far as to say that they had not noticed any disturbance.“No one cared,” one of the haredim manning the booths said. “It’s not the most comfortable thing but we have known [the extremists and their tactics] for years.”At least several of those in attendance at Wednesday’s protest appeared to be regulars who have participated in previous violent altercations in the city over the past several years.